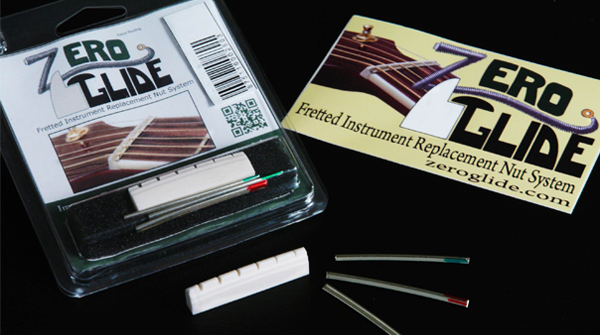 (PRESS RELEASE): The concept of a ‘zero fret’ has been around for a long time in the guitar industry. There is, however, a good chance that you have never come across the idea before, since it never really caught on with the big US manufacturers and, paradoxically, tended only to be found either on more expensive luthier-made guitars or on some cheap instruments from the 1960s. The idea is simple - a fret is placed just after the nut on the fretboard, the primary purpose of which is to make guitars easier to set up and to forestall potential intonation problems. The presence of zero fret makes the need for detailed nut cutting and set-up obsolete, as the strings rest primarily on the zero fret instead of the nut itself, reducing the string’s contact with the nut by up to 93%, reducing friction and giving the nut the job of string spacing only.

Having said that zero frets haven't found a great deal of favour, they have and do have their adherents and you will find them used on Vigiers, Gretsch, Framus and the superlative Fylde acoustic guitars, which will need no introduction to connoisseurs. Given the intonation problems that can be notorious on certain famous models, it's surprising that more makers haven't adopted the system and even more that users plagued by such troubles don't take matters into their own hands and get one fitted by a competent repairman. In fairness, retro-fitting a zero fret has been a pretty big deal, requiring a new fret slot to be cut, a new fret installed and polished to shape and the nut to be adjusted as required.

Until now, that is, because this is where the company Zero Glide comes into the equation, a US outfit producing an all in one solution comprising a pre-made, CNC cut, genuine bone nut with a nickel silver zero fret attached that can be dropped in place of your existing nut with no cutting or other modification of your guitar required. The company offers a series of pre-cut nuts to fit all the best known guitar types, or blank nuts if you’d rather cut your own. It also offers very reasonably priced custom nut production if you have something unique that requires re-creation for your guitar.

Fitting the Zero Glide nut is a simple process of tapping out your existing nut (a surprisingly easy procedure, as you can see on Zero Glide's website video) and putting the new nut in its place, followed by dropping the zero fret into the small space in front of the nut and gluing everything down. The zero fret automatically drops into place on your fretboard and immediately imparts its marked benefits for your guitar.

We were so intrigued we ordered a sample and asked GI's 'tame' repairman/luthier, James Collins, at James Collins Guitars/12th Fret Guitar Repairs in Sussex, UK, to fit one for us. The guitar we chose turned out to be one of James' own - a Gibson Les Paul standard, an instrument that we felt might benefit from the fitment - if it worked!

According to James, the fitting wasn't difficult, he told us: “The install was pretty easy, with good, clear helpful instructions. In addition to the straight forward installation, the zero glide sounded resonant and has a clarity slightly improving on the bone nut that was fitted previously. The height between zero fret and first fret was adjustable with four different zero frets allowing for some height preference which made for a nice action height over the nut to first fret. We tried all four different frets to get the height where we wanted it. Overall a nice addition, possibly more noticeable if going from a plastic nut rather than from bone, aesthetically pleasing and retro-fittable.”

One of the most significant benefits of a zero fret is a marked improvement in the intonation of a guitar. On a regular guitar the strings are held above the fretboard entirely by the nut so that they can vibrate freely, but the distance that the string has to travel to the fret is often higher around the first five frets than anywhere else on the fretboard so you end up with a guitar that is less in tune in this region. The zero fret allows for a much more even string height across the length of the neck since the nut is now only guiding the string into the tuning pegs, with the string actually resting on the zero fret instead as its point of contact for vibration. This allows for much more consistent intonation and tuning across the first five frets, compared to the rest of the guitar and the results are immediately obvious upon playing a zero fretted guitar. Another related benefit comes from having less friction on the strings since they are no longer touching the nut in them same way, but are resting on the zero fret instead of inside a nut slot. This reduces friction and allows for better tuning stability and tuning peg response. Zero Glide quotes that the zero fret solution gives you 93% less surface area for friction to build up than a standard nut slot and, whether or not the figure is correct, tuning stability is most definitely improved with this set-up!

A more contentious benefit relates to the tone imparted to the open strings with a zero fret. Due to the fact that the string is now resting on fret material, the open strings sound identical to fretted notes, giving more tonal consistency across the range of the instrument. Some people may be appalled at this idea since they love the open strings to sound different, but what can’t be denied is the extra sustain and brightness that the open strings gain, since frets have a far less dampening effect on the string vibration than the traditional nut would.

The Zero Glide is a fantastic idea and remarkably easy to set up and fit. The lack of string contact in the nut slots themselves means that your nut should last a lot longer and, since the zero fret is a separate part, should this need replacing it would be a very simple procedure to do so with no permanent modification to your guitar. The benefits are marked and very useful with no snake oil or voodoo to speak of. All guitar players should be able to hear the benefits of the Zero Glide nut with ease and at a cost that is very attractive, even for custom options. Am I tempted to fit this solution to my own guitars? I am - it's very cool indeed.

By the way, the company also offers Zero Glide nuts for basses, acoustic guitars, banjos, ukuleles and mandolins. They offer a lot of advice and guidance as to size and model on the website and seem very open to discussing individual or unusual instruments that aren't catered for from the extensive ready-to-go range currently offered. So, particularly if you have a troublesome instrument in your collection, here's your chance to put it right with the minimum of hassle and expense!