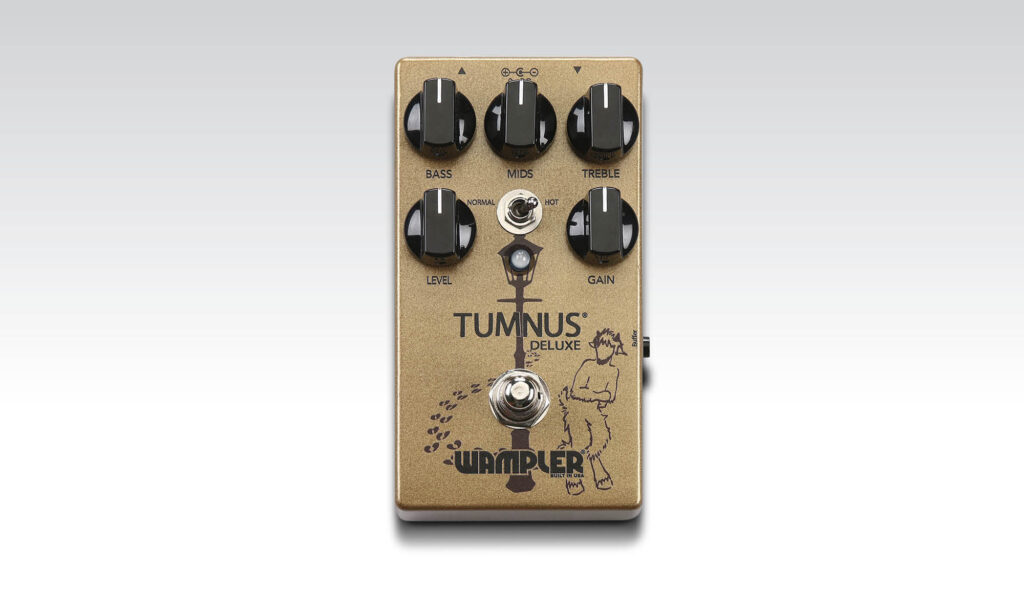 This is a powerful 100w combo that is loud enough for any gig and designed to cope with the tonal requirements of a loud gigging amplifier while offering everything you need in a single package with high-quality effects and recording solution built in.

None that I can think of

When it comes to amplifier and pedal manufacturers the word, “boutique” is what we associate with high-quality bespoke design and engineering. But that’s how Brian Wampler started out. Unhappy with the tones of “off the shelf” stomp boxes, like several other pedal engineers Brian started modifying and improving certain pedals. Before too long it was obvious even these modifications didn’t stand up to Brian’s expectations, and Brian began producing his own boutique pedals under the moniker Indy Guitarist. Before too long Brian changed the name of the brand to bear his surname, and the rest is history. With increased production of the units, Wampler has fast become one of the leading brands in high-quality stomp boxes, and are built to Brian’s exact demanding specifications.

Wampler has released a several “amp in a box” pedals, namely the “Plexi Drive”,  “Thirty Something”, “Triple Wreck”, “Catapulp”, and the “SLOstortion”. Wampler has also produced their own updated version of the classic Japanese “green” overdrive, with the release of the “Clarksdale” overdrive, which featured Wampler’s take on the on a classic with the inclusion of a three-band EQ and a smooth/big switch, adding some modern updates to a bonafide classic.

When it comes to legendary pedals, the “Klon Centaur” is deemed the “Holy Grail” of overdrive pedals. Used by the likes of Jeff Beck, Andy Summers and John Mayer, the Centaur had a rock star price tag to match, which raises the question “is a stomp box really worth that much?” With a price tag that high several Klon based units have become available, and in 2015 Wampler released the hugely success and revered Tumnus; a space-saving mini stomp box based on the legendary Centaur. I own this pedal and absolutely love, so I was very keen to get my hands on the Tumnus Deluxe and see what Brian had added to this revised/deluxe version.

The first thing you’ll notice is that this is a full-size pedal. Obviously, more space was required for the various additional features that have been included. That being said the pedal is a regular single switch sized pedal, considerably smaller than that unit it is based on. Visually the pedal resemblance nods towards the Centaur with its striking gold paint job. I love how Wampler has kept the “Mr Tumnus” theme with the graphic found on the original Tumnus, but added the lamp post that frames the pedals indicator; a nice “Narnia” reference to satisfy my inner geek.

Control wise we have the three controls found on the original Tumnus, volume, gain and treble. These controls are based on closely on the original Centaur, and with faithfully recreate tones famed by that legendary circuit. But here is where the Tumnus Deluxe goes a little further. Wampler has applied a more contemporary take on the classic Centaur adding some new features that will broaden the pedals appeal stylistically. Wampler has added an active mid and bass control to the deluxe; when the controls are set at 12 o’clock you’ll get pretty much the original Tumnus tone,  but with these additional controls it’s possible to sculpt your tone even further. Use these controls to enhance the tone of the pedal driving a clean amp, or to push a clipping amp into a smooth toneful overdrive/distortion.

The original Tumnus featured a buffered input which is 100% faithful to the legendary Centaur. This has been included on the Deluxe version, and as Wampler state, it will enhance your tone weather the pedal is on or off. Another great feature of the Deluxe is that you can choose between either a buffered or true bypass, offering you clear “uncoloured” tone by pressing the button located on the side of the pedal.

Another new feature is the normal/hot switch located on the front of the pedal.  When switched to normal we have the same gain structure of its predecessor. While flicking the switch to “hot” will increase the gain when the gain control is turned last a certain point. This is a great new feature, as you can opt for the classic Tumnus drive, and kick the pedal into more high gain territory.

The construction and components used on the pedal are what you would expect from Wampler, a tough casing with a silent, smooth unlatched switch, quality pots and jack sockets. I love how the input and output are on the front of the pedal casing and not the sides, which aids some board space saving.

As I mentioned early, I’ve had an original Tumnus since it was released and have used mine a lot. I was excited to hear what the new features bought to an already great pedal. While one could argue that the beauty of the original Tumnus was its size and its simplicity, the new additional features on the Deluxe are well thought out, and add another dimension to the pedal. In the normal mode, bass and middle at 12 o’clock, there is my Tumnus tone I know and love. But then start to add or subtract bass and mid and you can fine-tune the tone. With a clean amp, the Tumnus Deluxe delivers a very rich full overdrive, which can be pushed into more saturation when the “hot” switch is engaged. I personally prefer adding pedals on top of a slightly driven/clipped amp tone, and for me, this is where the Tumnus Deluxe excels. Reduce the gain control and push the volume and use the Tumnus Deluxe almost like a boost. You have the added flexibility of the classic Centaur treble as well as the active mid and bass. Start to introduce some gain, and we are off!! Fantastic scope on the EQ controls; I can get everything from smooth Carlton-esque mellow leads to aggressive biting blues crunch. Kick in the hot switch, dial in some extra gain and tweak the EQ and I have a modern high gain tone! This is such a flexible and musical pedal that can be used for some many different styles and applications, to suit your playing needs and to integrate into how ever you run your rig.

I’ve reviewed Wampler Pedals before, and I love them, there isn’t  anything not to like. They’re musical instruments in themselves, and I find them inspiring to put into my signal chain. They’re stylish and well built, and let's face it if you are a pedal player you want great quality and great features, and so far I’ve not used a Wampler pedal that doesn’t tick all of those boxes. I was slightly dubious when I saw this pedal, “how can they improve on something that’s already great?” Well that’s where I got it wrong; the Tumnus Deluxe isn’t improving on the original Tumnus, it’s just enhancing. Wampler have appeased the buffered verses true bypass guitarists with the switchable option; we still have that familiar Tumnus tone, but with the additional drive and EQ we can delve a lot deeper with our tone chasing.  Will it ultimately replace my old Tumnus? Absolutely not, the original Tumnus is fantastic, small and incredibly simple. Would I use the Tumnus Deluxe? I already am; this pedal is excellent, and for the type of work I do ask a guitarist flexibility is key. If you’re after an affordable Centaur that offers more than what it’s based on then this pedal is well worth checking out. I’ve already added one to my collection. 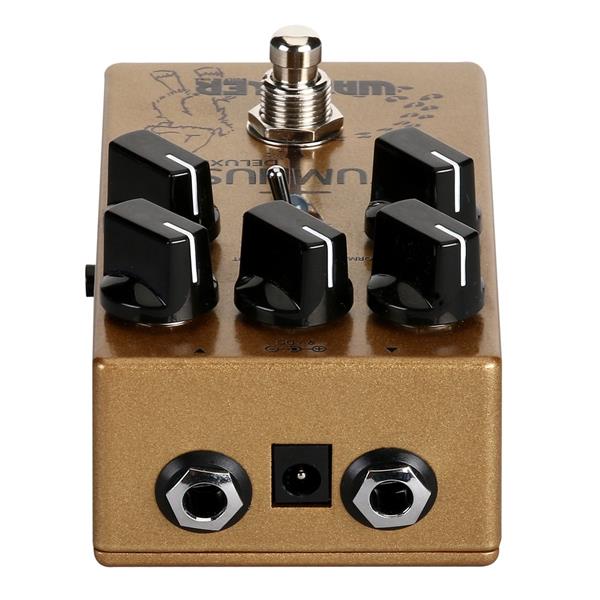 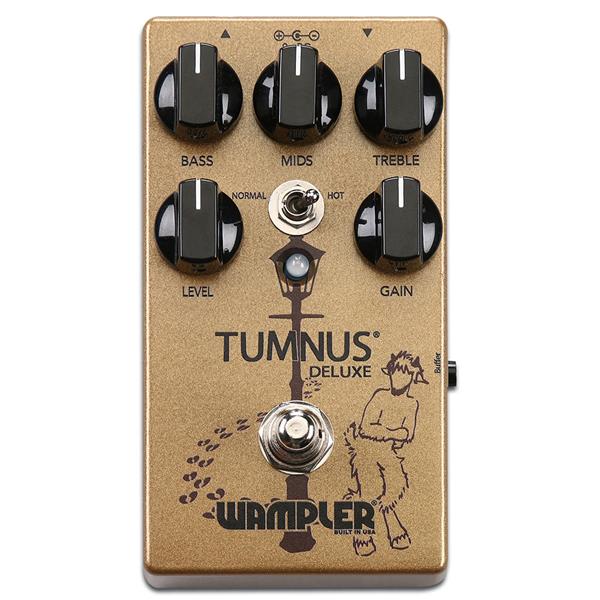