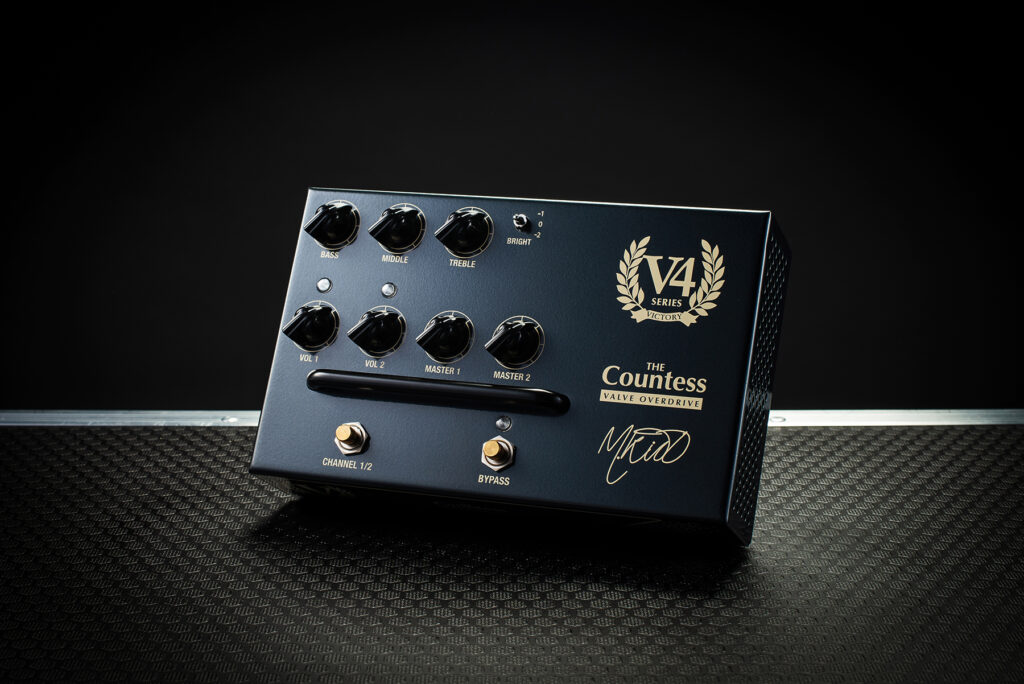 With the market awash with incredible overdrive and distortion units that all excel in front of a great guitar amp, trust Victory to change the game with the Victory V4 Series Pedal Preamps. Featuring four valves running at proper plate voltage in a pedal format; these all-valve preamps not only give you expanded versatility live, but they also fit right in with your recording setup. Here's Nick Jennison with the full review of the Victory V4 Countess Preamp.

Have you ever wanted more sounds from your amp? I think it's something we can all relate to. If you want a different sound from your pedals, you can swap them out easily enough. If you have a guitar you love, you can easily swap the pickups out to tweak the tone to your liking. But adding channels to your amp? Victory has the answer.

According to Victory lead designer Martin Kidd, the majority of an amp's tone is in its preamp, and Victory's V4 pedals are just that: the preamps from their Countess, Kraken and Sheriff amps in pedal form. Sporting no less than four preamp valves, these rather sizeable pedals are no pale digital imitations - they're the actual circuits found in the amps whose names they bear. The Sheriff offers two channels of Marshall-esque growl, while the Kraken sports both classic 90s British crunch and fire-breathing American gain. But perhaps the most interesting pedal in the range is the one we're looking at - the Countess.

The original Countess amp was designed as a do-it-all, go-anywhere lunchbox amp in collaboration with Guthrie Govan, and is probably the closest in tone and in spirit to the original handwired Victory V100 and V50 amps. It's a two-channel design with a high headroom, sparkling clean channel and a smooth and articulate high gain lead voice: both of which are faithfully recreated in the V4 Countess pedal. So convincing in fact, that when I compared the preamp to a good friend's V30 Countess head, he couldn't tell when the pedal was on or off!

The control set is very simple, with Volume (read: gain) and master controls for both channels, along with a shared three-band EQ and a very powerful master "bright" switch. This enables you to pair the V4 with the power amp of pretty much any amplifier, regardless of brand, design or topology. You read that right: power amp.

The V4's genius is in the way it connects to your amp. By using the "amp thru" method (similar to a conventional 4-cable method), the V4 is able to completely replace the preamp section of your amplifier while the pedal is engaged, while leaving your amp completely unchanged when the pedal is bypassed. It literally, not figuratively, adds two channels to your amp. None of this connection wizardry in any way impacts the way you hook up your pedals, and the remote switching means you don't even have to have the V4 on your pedalboard - it can sit atop your amp or in a rack drawer and be controlled with any conventional latching footswitch.

Of course, if you do want it on your pedalboard it is a fairly sizeable pedal, and the 12v 800mA power draw will tax your power supply (although combining two outputs on a Strymon Zuma works just fine), but that's a small price to pay for having a full, legit two-channel all-valve preamp in your board.

Of course, none of this is worth a jot if it doesn't sound good, and I'm pleased to report that the V4 Countess sounds (and feels) phenomenal. The clean channel is bright and sparkly with a blooming low end and a laid back midrange that's reminiscent of a great Fender or Mesa clean, but winding the volume up produces a loose, chiming grit that's perfect for Americana jangles or bluesy leads. The top end is a little too extended for most fuzz pedals, but it takes mid-heavy overdrives very nicely. The overdrive channel, by contrast, has a very smooth and rolled off high end that's fantastic for lead work, with great articulation and clarity. The low end is huge (a little too huge for my tastes) and a little too loose for tight riffing, but at lower gain settings the overdrive takes on a chiming quality that's great for articulate chord work, and it cleans up very well with the guitar's volume control.

To my mind, the V4 is very much a "cleans and leads" pedal, and the perfect compliment for an amp that lives somewhere between those extremes. A warm "pedal platform" amp like a Victory V40 will be benefit from the sparklier tones in the V4, and a crunch machine like a Marshall will pair perfectly with the V4's singing leads, and high headroom cleans - as will a hyper-aggressive metal monster like a 5150. Likewise, and you have a Dual Rectifier with monstrous gain and super clean cleans, the V4 Countess can add pushed "edge of breakup" tones and chiming mid-gain sounds that fill that amp's blind spots.

Whatever your amp of choice, the V4 Countess has two sounds to compliment it. The tones in this pedal are a delight to play and to listen to, it makes the perfect fly rig solution, and if you pair it with your favourite IRs it's a fantastic recording tool. Highly recommended!