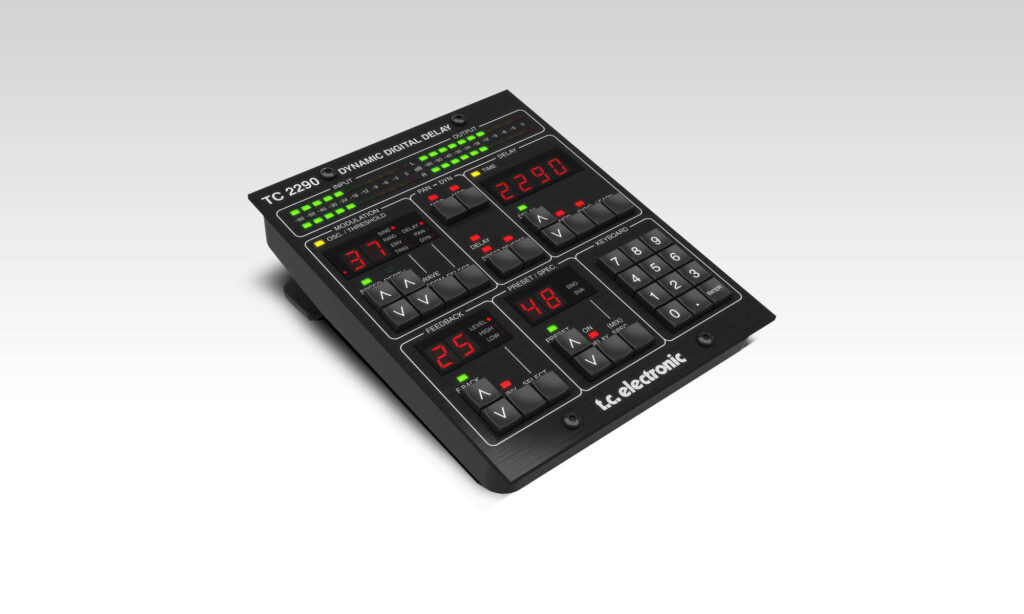 In use, the 2290 DT was everything that I had hoped it would be. Scrolling through the presets provided me with instant lush modulation, and pristine delays.

A 2290 that integrates with your favourite DAW.

The USB connection can be a little frustrating if you purchase all of the units in this line.

In 1985 TC Electronic released the TC2290 Dynamic Digital Delay + Effects Control Processor. This hardware multi-purpose rack unit featured stunning delay and modulation effects, plus panning. The unit included unique dynamic controls, which enabled a variety of parameters to be controlled in relationship to the signal source being processed. This was also referred to as “ducking”, meaning the delay level or the repeats would pull back during busier parts of a vocal melody or guitar solo, and becoming more apparent at the end of a phrase or held notes. This unique feature made this unit appealing to both producers and guitarists, with the TC2290 at home in both studio and guitar rack systems. The sound of the TC2290 can be heard all over U2’s “The Joshua Tree”, and was also David Gilmour’s main delay unit during “The Delicate Sound of Thunder” tour in the late ’80s. Longtime TC artist, Dream Theater’s John Petrucci also used the TC2290 in his rig during the ’90s.

The iconic status of the TC2290 made these units very sought after and collectable. Many leading brands have included 2290 style patches and models on their units and have also adopted the dynamic/ducking controls. TC Electronic have themselves included the TC2290 patches on their “Flashback“ pedal delays, “Nova” multi-effects and on their “G- System” series of rack and floor controllers.

TC has now released an updated hybrid plugin/hardware controller version of the classic hardware unit called the TC2290 DT.  The TC2290 DT is a faithful replication of the original hardware unit designed to integrate with modern recording DAW’s, and supports VST2, VST3, AU and AAX-native formats as well as 32 or 64 bit versions, making the 2290 DT compatible with all the leading recording platforms including Logic, Cubase, Nuendo and Pro Tools. The original unit combined both analogue and digital technology, with a large part of the unit being analogue, which was ultimately responsible for its warm organic voice. According to TC’s own launch video, one of the major challenges faced by TC’s technical team was to strip down the original unit and measure the components to be able to recreate how the analogue and digital circuits work, and recreate faithfully the original sound within a native plugin. There was no code that could be copied into a program from the original 2290.

TC really delivered with this project, producing not only a faithful sonic replica within a plugin that will integrate into your DAW workflow but with the USB hardware controller, a tactile experience that you would have achieved with the original rack unit. The goal was to have the sound of the original 2290, but with the benefits of modern DAW technology; multiple instance, automation, project and preset recall.

Although the processing is handled within the plugin, most of our focus will be on using the hardware controller, which connects to your Mac or PC using a micro USB cable. The hardware controller’s design is epic, giving you that instant retro familiarity of the original unit, and enabling you to recall pre-sets, monitor your levels and customize and program and sound you desire with your fingers.

The hardware controller features a steel housing, with non-slip rubber feet to enable comfortable operation. The controller connects to either Mac or PC using a micro USB cable. The controller features input and output meters, with the plugin being able to run in either mono or stereo configuration. Like its famous big brother, the controller panel is divided up into the various sections; modulation, oscillation and threshold, where speed, depth and waveforms are selected. We have the Pan/Dynamics section, these functions are engaged with the “mod” buttons. The pan function can be assigned to the delay signal, direct signal or both, which dramatically alters the effect, depending on which waveform is selected in the modulation section. If neither direct and delay are selected the delay signal will be inverted in the right channel, great for wide modulation effects. The dynamic section includes a reverse button that selects the effect in the opposite way. There is much sonic exploration to be had combining both sections discussed so far. Next is the delay section; The 2290 DT is capable of up to a 9999 ms delay. The delay times are selected either with the up and down delay arrows, or the numeric keypad. When the “sync” button is engaged, the delay will sync to the tempo of your DAW. The delay arrows will change the notes values of the delay. This can also be changed in the plugin, plus you can select if the value is straight, triplet or dotted. The final way of imputing your desired delay is by using the “learn” button, which is a tap tempo control. The final control is the “mod” button, which enables delay time modulation, such as chorus, flanger, pitch modulation and doubler, dynamic modulation, tremolo and dynamic/gated effects and pan modulation. As you can see, this isn’t just your run of the mill delay. The next section is feedback, which controls the number of repeats of the delay as well as effecting modulation parameters. The “Inv” button inverts the feedback, which is great when creating modulation effects. We also have a high and low cut control for controlling how bright or dark your effect is.

The Preset/Spec section enables you to scroll through pre-sets, which can also be achieved within the plugin surface. We have a button to turn on and off the delay. The “Spec” button allows you to access control of other parameters that are only available through the plugin itself.  The keyboard section is used to enter specific values or presets without having to use the scroll arrows.

Moving onto the plugin interface, we have a few additional controls, some of which can be accessed using the “spec” button, or by simply using the plugin itself. We have a series of level controls, including mix, which enables you to do mix the amount of dry and effect signal. This function should only be used if you are using the plugin on an insert; when running it on an auxiliary you should set the mix full and control the balance on your DAW. The lock symbol is a very useful feature as it will lock the levels so even when you open another instance of the plugin the values will remain 100%. We also have the DAW sync control for selecting the subdivision of the delay plus we can choose if the subdivision is straight, triplet or dotted. We have some additional delay modulation features including “Inv Delay Mod”, for inverting the modulation start and pitch shift direction, plus we have a “deep mod” setting for more extreme modulation and pitch shifting.

One of the most important sections of the plugin is the threshold controls where we control the dynamics of four items; Delay Mod, Pan Mod, Dynamic Delay volume, and Dynamic feedback. This is where the desired amount of ducking is controlled.

In use, the 2290 DT was everything that I had hoped it would be. Scrolling through the presets provided me with instant lush modulation, and pristine delays. Modulation ranged from thick wide analogue chorusing to psychedelic sounding flanger effects. I especially enjoyed such effects as chorus with panning adding width and character to mono guitar parts. I even found myself using the doubling effect on an electronic snare drum on my Def Leppard Tech Session, which really thickened up an old sample. The delay is incredible. I have long felt dissatisfied with my plugin delays, and I have many, some very good delays, but they seemed to lack clarity and separation. The delay provided by the 2290 DT provided so much space and separation from the played source, which such an incredibly hifi sound. Using the hardware control adds a whole new feel to the plugin experience; it's great to be pushing buttons as you listen to your audio and make adjustments, which out moving a mouse around on screen. Be sure to check out the demo video where I run through some setting and presets to hear some of the effects available.

To conclude this unit is brilliant. I have always desired a 2290 for live and studio, and with the 2290 DT I now have the best of both worlds. Are there any downsides to this unit? Sonics and operationally no, but one slight niggle for me is the USB, or should I say how many of them you need if you own the complete set. I have all four units in my studio and had to purchase USB hub for my Mac, plus, that’s a lot of cables to deal with, and trust me I’m the master of the cable tie! It would have been cool to see some kind of cable link option, to daisy chain multiple controllers together, ultimately having just one USB attaching to your computer. This is a tiny niggle on my part, but maybe something that TC could address. 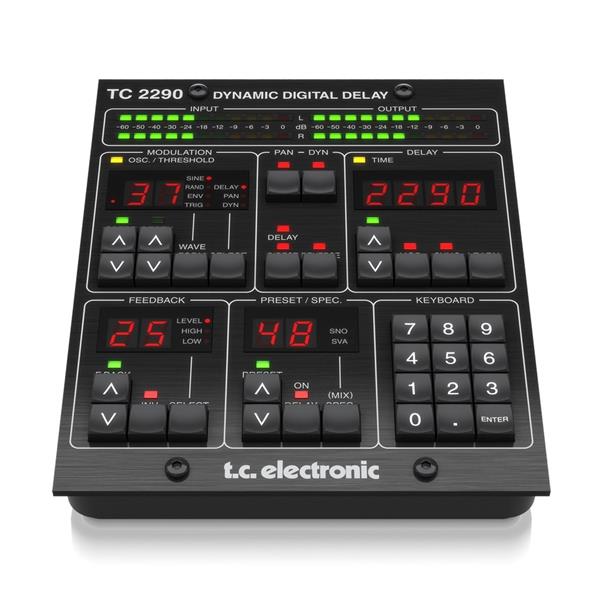 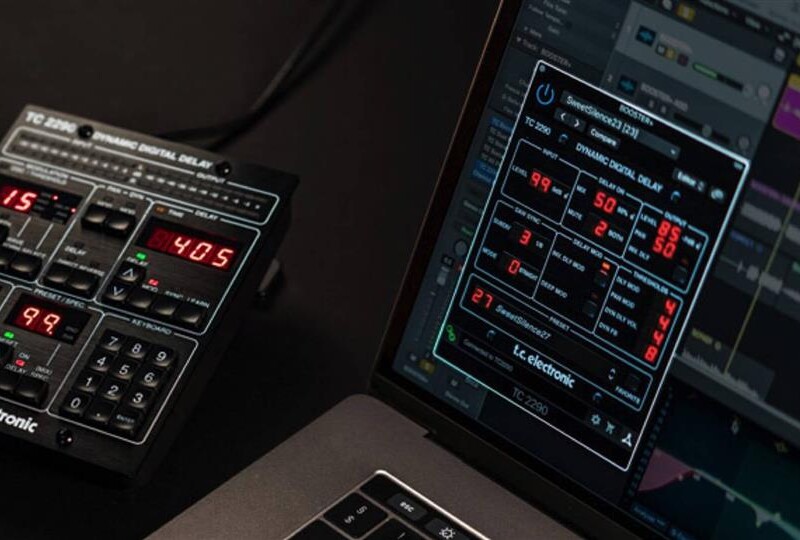 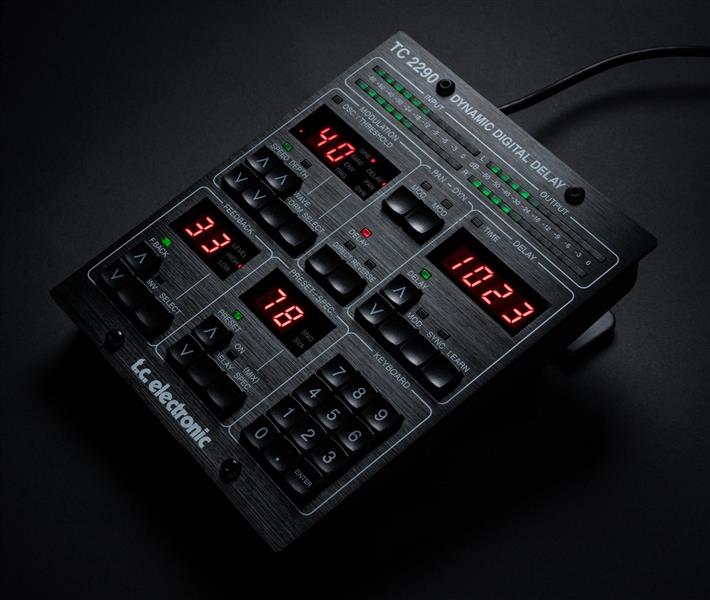 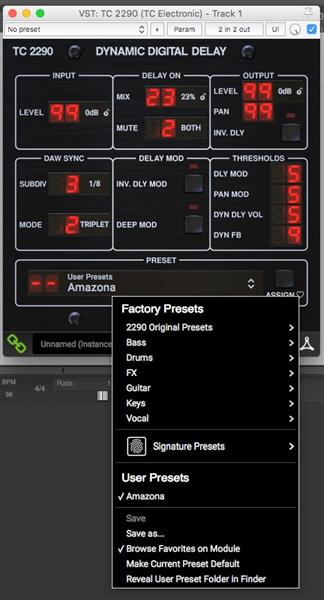 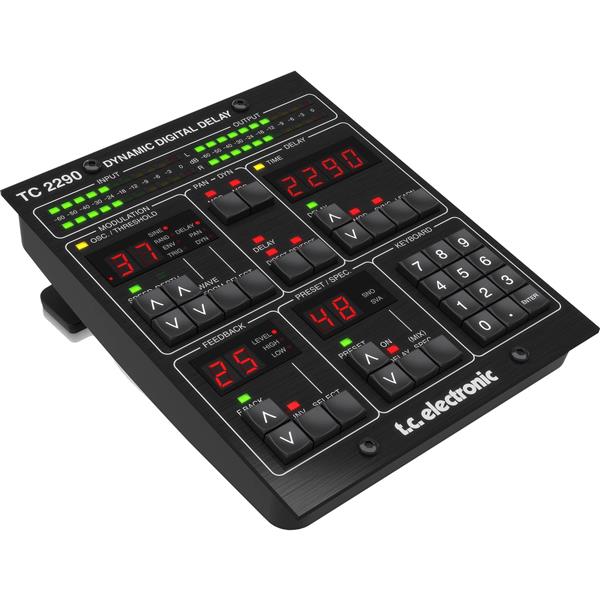