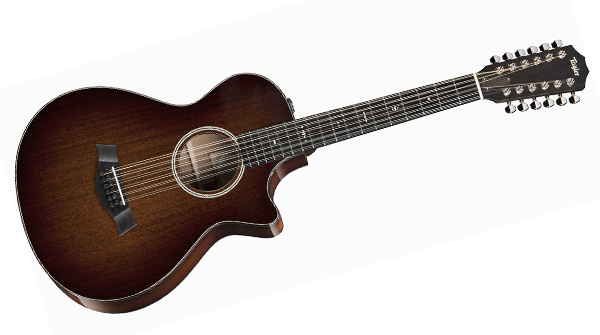 We all love a 12 string acoustic, but for the less experienced player, the dream of owning one can often be better than the reality. They take longer to tune, have fatter necks and a slightly heavier string tension and not every situation suits the sound of a 12 string acoustic, which means they often get overlooked as a 'must have' instrument. However, it is a glorious sound, that when not over used can really add a huge colour to the sound of a band or even a solo singer songwriter. I personally own a high-end 12 string Guild acoustic, just in case I need that sound, but it is a bruiser of a guitar to play compared to this Taylor 562ce 12 string guitar which came to us set up perfectly and is nearly effortless to play.

The reason why it's so easy to play compared to most 12 strings (even good ones) is because a while ago Taylor took the decision entirely re-think the instrument and at Winter NAMM this year launched several new 12 string models designed to offer that easy to play quality that has always set Taylors apart. The 562ce was just one of the new introductions and falls into the 'Grand Concert' designation, meaning it is a smaller bodied instrument - itself unusual in a 12 string. To make it even more different, Taylor has opted for a 12-fret design. In case this terminology confuses you it doesn't mean the 562ce has only 12 frets! What it means is that the neck joins the body at the 12th fret, which was once more or less the standard for all acoustic guitars. This was a good move for a 12 string as you aren't likely to be reaching to play fast runs on the high frets and the consequently lower string tension on a 24 7/8” scale length is a contributory factor in making the 562ce easy to play, as is that smaller body size.

Constructionally, we have solid tropical mahogany for the top wood, back and sides which is a great sounding tonewood on acoustic guitars (and guitars in general). With a mahogany top you get a bloom to the tone with a natural compression to the note, unlike a spruce top which will lend itself to more attack and quicker response. Because mahogany is a real dense wood, it will take longer to open up and get played in, but the more it gets used, the better it will sound because it will develop lovely overtones and become fuller and richer than spruce or maple. The back and sides on this model also being mahogany, help deliver lovely midrange warmth on an acoustic instrument. With the addition of an ebony fretboard on a mahogany neck, this guitar does have a full rich clear sound that is big, warm and very fine sounding indeed. And it will only get better as the years go by!

A common criticism of 12 string acoustics is that they can sound boomy and over dominant. Well, not this one! In fact the 562ce's sound is really well focussed which means it would be an excellent recording as well as performing guitar.

So far so good, but what of the amplified sound? Happily, Taylor has used its own Expression System which we reckon is one of the very best pickup/pre-amp combinations you can get.

This 562ce features the Expression 2, which uses a custom designed pre-amp that kicks out a 25% hotter signal than most other systems, and which features three individually calibrated sensors that sit behind the saddle. I have to say it really does sound incredible. A good onboard is so convenient both for the studio and live. In the studio the combination of a good mic on the guitar blended with the Expression  2 direct to the desk or your software would be as good as it gets. For live, the sound guys will thank you if it instantly sounds great as they bring it up on the board!

There are some nice tasteful appointments to add to the quality and look, such as imitation tortoise shell binding, ivoroid fretboard inlays, a shaded burst to the neck and body, a satin finish, an ebony headstock overlay and truss rod cover, a TUSQnut and Micarta saddle, all of which add up to real gem of a guitar.

This guitar does fall into the higher end of the market price wise, but I haven't played a nicer 12 string, both in ease of playability and sound. Price doesn't always equate to great guitars. I'm sure you could hunt around and pick something up for half the price, but it won't be as easy to play as this, be as detailed in tone as this, be a guitar you keep forever, or have the name 'Taylor' on the headstock. There's no doubting that this is a serious guitar that is one of the best there is, so if you are serious about your 12 string requirements, then this should tick all your boxes. As I say, it's not a cheap guitar but we still reckon it's great value as it has to be one of the best 12-string guitars on the market and for that sort of quality it doesn't seem at all expensive.