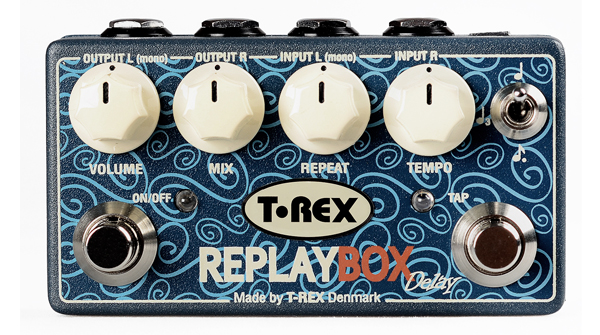 T-Rex pedals make a welcome return to GI's review pages with three of the Danish company's heavy duty stomp boxes. Are they the towering monsters, or headed for extinction? Doug Cartwright goes all Jurassic on us.

T-Rex is a small but growing name in the guitar world, arriving on the scene in 1996 and quickly making a mark internationally. We looked at a whole nest of T-Rex pedals, way, way back in GI issue three (that's prehistoric all right - Ed) so it was high time that we waded back into the primordial swamp to try some more!

The Quint Machine, Creamer Reverb and Replay Box all arrived in attractive packaging, with distinctive looks that nonetheless tied them all together with T-Rex’s overall retro-tinged image. Of the three pedals, the Quint Machine, which is an innovative octave pedal, is definitely my favorite in terms of appearance as the combination of purple and cream looks really classy, whilst the 1970's brown and cream of the Creamer was, for me, the least attractive of the three, aesthetically speaking.

In terms of build quality and reliability, T-Rex is easily up there with the best. The company's  website goes into eye-watering detail about the durability of the potentiometers they use (“the military standard is 40,000 circle-turns before wearing out, the T-Rex standard goes up to 100,000 circle-turns before showing signs of audio noise”) the metal toggle switches, jack connectors… even the research that’s gone into making sure the foot switches ‘click’ in a satisfying manner. Spending time with these pedals, it was obvious that they will hold up well to the claims made in the marketing blurb; I could find nothing to fault in the design, components or layout of any of the three.

Plugging in the Creamer Reverb first, I was impressed by the simple layout and versatility of the pedal. The Creamer features three reverb types (spring, room and hall) and is a digital reverb effect; however, it maintains an analogue dry signal throughout, blending the digital effect in without affecting the original tone in any way.  This is a great idea and a nice touch, which should reassure tone purists who may panic at the thought of a digital effect in their signal chain, and in practice I found it to work superbly. All three reverb effects were satisfying and definitely useable, whilst the simple Reverb and Decay knobs offered all the control you could wish for with a Reverb effect.

As an added bonus, the Tone control is an extremely effective third knob that is designed for adjusting/rolling off the high frequencies of the reverb (the wet signal only), which is ideal for taming the sound if it becomes too bright without altering the original tone. A welcome addition that really improves the applicability of the pedal.

The Replay Box was the next pedal I tested, a stereo delay effect with the same analogue dry/digital wet design as the Creamer. The first thing that struck me about the pedal was how absolutely tiny it is considering its functionality! If you need a stereo delay but have space limitation issues this pedal will pretty much win out on that point alone, but there was more good news once I plugged it in. The simple control layout of Volume, Wet/Dry Mix and Repeat (which controls the amount of repeats) offers all the control required for a delay effect, but the really knockout feature of the pedal is the tap tempo button, one of the great advantages of digital technology in an analog pedal. Combined with a subdivision switch allowing quarter notes, triplets and dotted eighth notes, this is a powerful feature that transforms the function, reliability and overall usability of the pedal. It’s absolutely outstanding to have this feature on such a small pedal, and combined with its size and the fact it’s also in stereo I can’t help but admit this is one of the most impressive delay pedals I’ve ever come across.

Finally, the Quint Machine is an example of T-Rex creating an exciting and innovative new take on a classic pedal. Octave doubling has always been a cool effect, great for everything from organ and 12-string emulation through to funky rhythms and powerful Rock tones. Typically these pedals allow the addition of an octave harmony both up and down one octave from the note being played, but the Quint Machine also adds in the option to play a 5th up and gives each modulated sound its own volume control. These volume controls allow for a vast array of sounds through blending each individual harmony, and the overall Mix control then allows the Wet/Dry mix of the effect to be set to the user’s preference.

The Quint Machine was everything a good pedal should be: fun, versatile and inspiring. It’s super easy to operate and could be used in so many applications, from subtle organ-y Jazz settings to rip-your-face-off classic Rock riffs and beyond. It’s difficult to imagine any guitar player who wouldn’t find something cool and enjoyable to use this pedal for, and although it’s not really an essential effect for anyone in terms of every song, every gig use, it's definitely well worth checking out for anybody who likes to have fun, experiment and be creative in their music and playing.