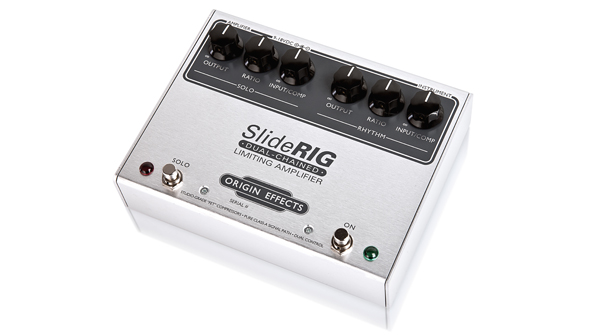 George apparently achieved this remarkable tone (and it really is remarkable - check it out! - Ed) by linking together a pair of Urei 1176 'FET' compressor channels from the studio mixing board, harnessing the 1176's clarity whilst adding extra 'oomph' via the daisy chained compression channels. Too much to expect from a pedal? Not so, thought Keats, who has sought to capture that style of compression (aka 'limiting') in a surprisingly affordable pedal.

Despite often being overlooked in the rush, compression has many benefits that Rock guitarists can use to boost their signals or to add extra dynamic range without overpowering the rest of the band. Country players, who tend to use fairly clean tones, sometimes rely on compression pedals to give their solos an extra kick or attack, without having to use an overdrive, while some Rock players use compression for an occasional clean solo boost, or for combining compression with a distortion pedal to generate dramatic feedback sustain, without having to crank their amplifier to pain threshold volume.

It may be subtle and it may need some working out, but compression is a very useful and underrated effect and the SlideRIG is aimed at slide guitarists or lap steel players who want to use compression to generate singing sustain with bags of clarity.

If you're more used to something like a Boss compressor pedal, the SlideRIG feels like a giant! The dual controls for the independent Rhythm and Solo modes demand that the SlideRIG is housed in a large brushed aluminum shell that measures approximately 200mm (W) x 155mm (D) x 52mm (H). It certainly takes up a reasonable amount of real estate on your pedalboard but this pedal nevertheless looks very handsome, with hefty old school control knobs and the attractive 'Vintage Railway Sign' font used on the screen printed control panel present a convincing retro image! The pedal runs from a standard 9v battery, or you can use mains power stepped down to between 9vDC and 18vDc, allowing plenty of flexibility for combining the SlideRIG with separate stomp boxes and power supplies.

Staying with the technical stuff for a little longer, the SlideRIG is a twin-channel compressor/preamp that uses high-end solid state FET circuitry to deliver its vintage-inspired warmth and sustain. It features two heavy-duty footswitches: the left switch toggles between Solo and Rhythm modes, whilst the right footswitch is an on/off switch that activates the global compression circuit. Rhythm & Solo modes both feature identical sets of rotary controls that independently adjust Output, compression Ratio (release) and Input Gain/Compression.

OK, so let's get down to the meaty stuff! The recommended way to use the SlideRIG is to keep the compression discretely on all the time in Rhythm mode, switching to Solo mode for a solo boost. Used thus, it's easier to achieve a smoother tone with a less jarring transition between rhythm and solo sounds. The compression is very transparent, indeed at lower levels you barely notice that it's there, at least until you switch it off! Whilst your guitar's natural tone doesn't change to any noticeable degree, it is still remarkable how quickly one becomes accustomed to the subtle little 'bump' or lift you get when the compression is on. There is no obvious clipping or distortion, thanks to the generous headroom, but when you finally do get to use it as a lead boost the SlideRIG sounds very powerful whilst retaining its all-important transparency.

Blues Rock players whose weapons of choice are a Les Paul or a PRS straight into the front end of a Marshall probably won't find much about the SlideRIG to excite them but Strat or Telecaster players, or those with P-90s- and particularly those that can use a bottleneck slide! - will certainly appreciate the compression circuit's huge dynamic range and impressive clean sustain. Check out the video!

There is one other, less obvious, reason why good quality compressor pedals are handy devices and that is that they can give solid state guitar amplifiers a more tube-like dynamic range. Transistor powered amps don't usually respond to playing dynamics with anything like the natural sensitively as their tube counterparts but whilst solid state combos like the Peavey Nashville and Roland JC series are still popular among slide and lap steel players, the SlideRIG injects a welcome bit of extra 'bounce' and liveliness back into the tone that might otherwise be absent from the amp's transistor driven circuitry.

The SlideRIG's price reflects the high level of research and build quality that has gone into its design. It definitely feels something of a niche product but its great sounds and rugged retro/modern design should appeal to serious rootsy Country Rock guitarists and slide purists who can really use this pedal to make their guitars sing.

Does it get close to Lowell George's Holy Grail sound? Don't just take our word on it. On the maker's website are testimonials from both Little Feat's Paul Barrere and Eric Roach, the band's guitar tech. This is a very accomplished product and we look forward to seeing more from Origin Effects in the future!

For the right player, this is a superb product at a very fair price for a handmade pedal of exceptional quality. If you want one, you will have to order it direct from the maker but the upside to that is that Simon Keats is happy to talk about the product with customers and potential customers, which keeps things nice and personal.