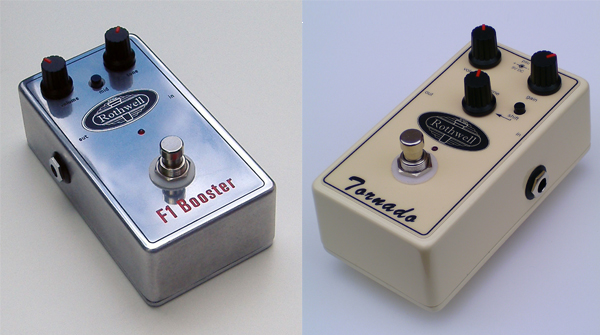 Former aviation electronics guru, Andrew Rothwell, has received great acclaim for his high quality, low noise pedals. But how do they perform on take-off? Jamie Humphries is our test pilot.

Andrew Rothwell has been making high-end guitar pedals since 2007, and has already created a stir in the industry. Rothwell has attracted such high profile uses as Mike Scott of Justin Timberlake's band and the late Gary Moore. The pedals are hand-crafted in the UK and are built to the highest spec, using low noise components and rugged, hard wearing switches and cases, meaning that Rothwell pedals will stand up to some serious punishment. For our video demo I checked out the F1 Booster and the Tornado Overdrive, and was pleasantly surprised with what I heard.

I've long been a fan of boosters against overdrive pedals, and was keen to hear how the F1 would perform. The F1 Booster is a clean boost that basically adds up to 20dB and can be used to either boost your signal, or send an amp that is slightly driven into a searing overdriven lead tone, or crunchy rhythm sound. The control layout is very simple, featuring just two knobs - volume and tone. The F1's tones circuit will enable you to craft the EQ of your sound and is something that sets this pedal part from many other boosters on the market. The pedal also features a mid switch. In the down position gives a scooped mid sound, while in the up position it gives a subtle mid-boost.

In use, the F1 is capable of producing vintage blues tones to high gain scooped modern tones and everything in between. Another interesting application for this pedal is that you can set it for the opposite of what a booster is often used for. If you have your amp set for a great full crunch tone, the F1 Booster can also be used for cutting the signal and cleaning up the amp. Try setting the level of the pedal lower, so that the signal drops when you kick in the pedal. You can also use the mid function to scoop out frequencies and help clean up your crunchy amp tone - great for using single channel traditional valve amps! I used the F1 Booster on our special Gary Moore tribute, running it into a four input Marshall Plexi head. As you can hear in this issue, the results were very authentic. The price is pretty good for a high quality boutique pedal, too!

The second Rothwell pedal we had to try was the very retro-looking Tornado Overdrive. As with the F1 Booster, the controls are very basic, yet very effective, with three knobs: volume, gain and tone. Like the F1 Booster, the Tornado also features a tone shift button. This pedal is a Class A, single-ended overdrive that uses JFET circuitry. JFETs work in similar ways to valves, which basically makes the Tornado not dissimilar to a traditional valve amp in both sound, and the way it reacts. Running the Tornado into a clean amp will produce a thick, authentic, valve like tone, with a rich bottom end. Wind up the gain to produce more saturation, and a natural compression and, again, it's very valve amp like. If you then press in the shift button, you can use the tone control to scoop the mids, and produce more modern high gain tones.

The Tornado can also be used as a clean boost to send a crunching amp into a full, rich, sustaining overdrive, by simply dropping the level of the gain and pushing the volume. One of the things that impressed me about this pedal is that even when it was set to a thick rich distortion, it would clean up when the volume of the guitar was backed off; again very akin to a valve amp.

Both of these pedals get my thumbs up, and I have even taken the F1 out on a gig to give it a real test. So if you're looking for a versatile clean boost, or a "stack in a box", both of these pedals should be at the top of your 'must try' list!