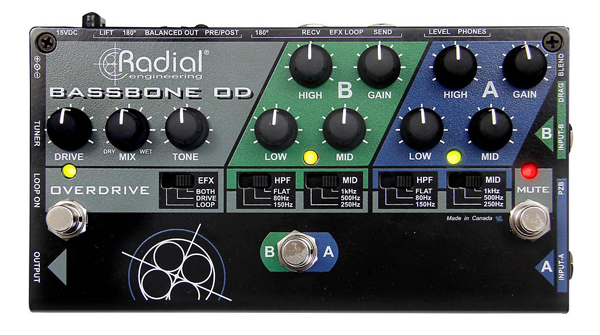 There are a few tools that absolutely should be in the gigging bassist's gig bag. Everything from the obvious spare strings, batteries, tuner, cables, good ole 'gaffa tape' and WD40. Then we turn our attention to how you handle your bass signal out to the PA system, recording or other receiving device. Naturally, in those circumstances some sort of DI from your bass or amplifier is required - but what if your gig requires zero back line or you have a number of basses to chop and change through? You're playing an acoustic gig with 'stand up' bass yet switch to electric for some numbers? Maybe you have a complicated signal path with a number of pedals that you'd like to punch in and out without 'doing the dance' every song?

On the face of it, the Bassbone OD looks like it has just a ton of controls that will confuse the technophobe - but please, bear with me. Despite the mind boggling array of controls that this 'central hub' provides to the musician, it's absolutely worth breaking each section down separately. When you've done that, you'll find that like most other products from Radial, this one is dead easy to use and you'll probably wonder how you managed without one.

First up in the metal cased Bassbone, there are two inputs for instruments. You have the option of setting up the pedal as two separate pre-amplifiers. One path and its EQ settings could be for a vintage passive bass, the other for a super glassy active 6-string. Indeed, even before you start knob twiddling, Radial know that you're likely to plug in a super wide range of sources and for those with passive pickups, you can tailor input B to match the impedance of a non-active instrument for the best tone and 'feel'. This is accessed by using the 'drag' control using a small screwdriver.

Channel A actually offers further functionality in that it also has secondary function. The PZB labelled control offers the ability to reconfigure that channel input so that it better receives the signal from a piezo pickup, in the case of a double-bass or other acoustic instrument. More sensitivity and a much high impedance helps to do away with common problems with piezo elements.

In normal circumstances, the middle foot switch marked A/B will switch between the two channels, muting one while sending the other direct to the outputs.

Once you have selected what instruments you are plugging in, you can move along to the next section of the pre-amp to tailor their sounds individually. “But wait!!!” I hear you say. What if I am using a double bass with both piezo and magnetic pickups. I have to use a mixer first? No siree! The Bassbone has a blend control that allows you to use both channels together at the same time and each set of channel controls will only affect the relevant input.

Staying with the front panel, let's have a closer look at the two identical channel EQ sections. I'll concentrate on the A channel. Four knobs and two slider switches offer up a super flexible EQ system. Top right hand knob of each channel offers level control for the channel. You'll be able to balance the volume of each instrument (or indeed pickup if you are taking two feeds from one instrument as mentioned above)

The equaliser is of a three band variety and is actually passive. It has a wide range of operation albeit slightly more subtle than that of a graphic. You will find that by winding all controls down together, the level will diminish which is what you'd expect from a passive circuit. But there's more! Not only are there shape knobs for bass, middle and treble but there is a frequency select for the mid range. Three centre frequencies cover from the lower midrange up to the very upper midrange frequencies. This is useful for accenting fingerstyle when boosted, or when cutting the mid control, brilliant for slap styles providing a 'top and bottom boost' type sound.

Moving on, a high pass filter is a method that allows tailoring of your low end by filtering off everything below a certain frequency - or you could look at it another way – allowing the audio above a certain frequency to pass unattenuated. The three position HPF on each channel allows you to filter out unwanted sub-frequencies that can muddy your bass sound, especially in the case of double-bass.

Of course, you don't have to use two basses - by connecting just to a single channel (A) you can toggle between the two pre-amplifier sections, giving you access to essentially a two channel amplifier. One channel for aggressive finger style, the other for scooped slap bass. Cool!

All that leads me smoothly in to the next section of the Bassbone OD. The 'OD' suffix refers to an Overdrive circuit. Three controls for drive, (the amount of distortion,) a wet and dry mix to allow for a balance between your clean bass signal and the added dirt portion and finally a tone control that allows for a toppy aggressive bite, or winding anti-clockwise, smoother low mids. I found a nice sweet spot using the drive section that added just enough 'dirt' to warm up the bass tone a bit but not to swamp the inherent bass tone. That's the sign of a good drive pedal for me. Don't get me wrong though, it will do aggressive if you want!

The overdrive section can be punched in and out using its own heavy duty footswitch. Oh, and even that has multiple configuration options! Underneath the OD section lies yet another slider, this time for selecting the operation of said footswitch. In its middle position, the button engages the OD separately from any other operation on the pedal. In the left hand position the overdrive function's toggle is sidelined and the button allows access to the onboard effects loop. Yes, you can switch it in and out here. So useful if you have five effects you'd like to turn on all at once. The final right hand position means that you can engage a big tone with your pedals and  the over drive section at all at once.

While we're still on the front panel, there's one other foot switch - it's marked 'mute' and does just that. Your signal will be silenced except for the connection to the tuner socket on the left hand side.

Connections galore, so let's walk round the outside of the case, starting from those inputs. I've talked about the right hand side options, so it is round to the top of the pedal. An earphone socket and level control - brilliant for in-ear monitor use or silent rehearsal. In the middle there's a mono effects loop that according to the website block diagram appears after the EQ section and drive section. The loop has a phase switch to correct the phase of pedals that 'invert' the audio signal in normal operation. That's a subject in itself!

Moving along for now though, what pre-amplifier would be complete without a pro D.I.Bass output for connecting to PA or recording devices? Radial has adopted its usual attitude of 'only the best will do' and thus you have also a ground lift, a phase switch and also a pre/post signal pick off selector for running the dry unaffected signal direct to 'the board' or to include all that lovely effects chain we have discussed in this review.

Top left hand corner: Radial has a 'cable lock' clip on the top corner for the power supply lead. This will stop the connector being yanked out inadvertently whilst in use in a gigging environment. That's what we call attention to detail!

On, at last, to the final straight and we're back round to the left hand side with the tuner output, the push in button that will allow the effects loops to be in an 'always on' state and most importantly your connection to your amplifier or next pedals in the chain.

PHEW! We made it!

It's hard to envisage the player who wouldn't be able to get everything he or she needed out of a Bassbone, it's so well thought out and specced. Being able to rely on the same sound settings and the recording equipment getting a super clean signal every time, it has got to be useful in the studio as well as the stage.

Radial has an impressive array of tools and effects for the amateur and professional musician alike and I have absolutely no qualms awarding this unit high marks for every feature on board. It's a brilliant piece of kit for so many reasons that it I'd say it's a must-have. It's a fabulous bass pre-amp with more facilities than most will ever need. It's also a great-sounding bass overdrive. All that combined with Radial's pro-class build quality and at a very fair price, too. There's just no option but to give this newcomer top marks.