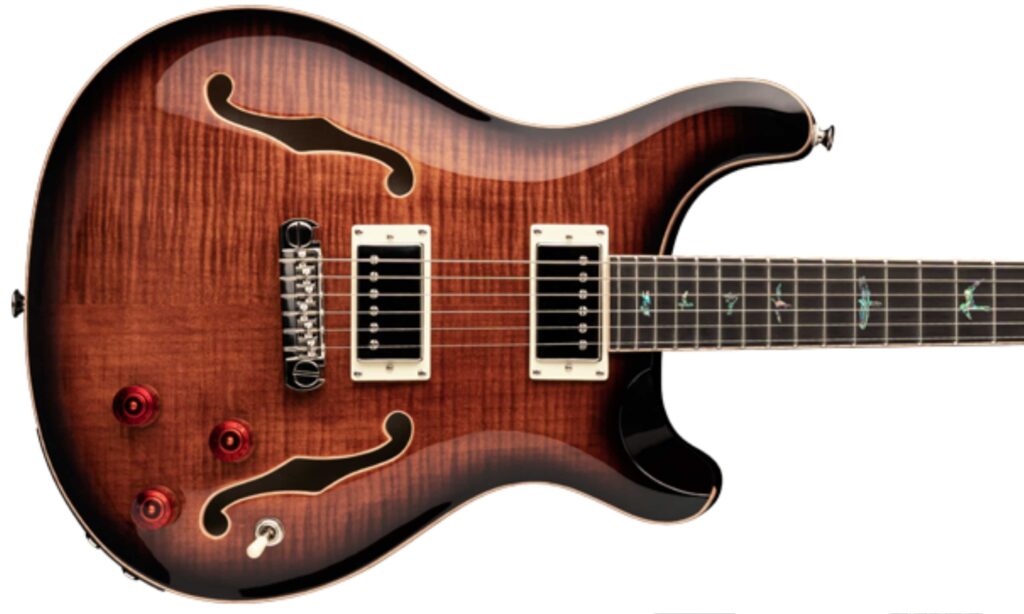 Tom Quayle Review the 2020 SE Hollowbody II Piezo from Paul Reed Smith Guitars. Billed as combining the power and stability of a solid-body electric guitar with the captivating resonance of a hollowbody instrument—the 58/15 “S” loaded hollowbody is designed to look as good as it sounds, with a figured maple top, back and sides as well as a mahogany neck (set-neck construction) with PRS trademark bird inlays. Tom tells us more.

PRS is well known for pushing the boundaries of performance and value with the SE range; retaining a surprising amount of the look, feel and quality from their high-end Core range of guitars into an affordable package that has become better and better over the years. One of the latest additions to the lineup is the SE Hollowbody II Piezo. Combining the tonal qualities of a Hollowbody with (as PRS say) ‘the power and stability of a solid body electric guitar’ and, for the first time on an SE, a newly designed piezo stoptail bridge for authentic acoustic tones.

The original PRS Hollowbody I featured a maple top with mahogany back and sides whilst the Hollowbody II sports both a carved maple top and back - the II in the name referring to the use of two pieces of maple. The SE equivalent utilises a five-piece laminate maple top and back in combination with mahogany sides and neck to closely match the Core version at a much more affordable price point. Flame maple veneers give this SE guitar a stunning, high-end look without the associated costs of the original and this effect is further enhanced with the use of flame maple binding on the body, neck and headstock.

The Hollowbody II is an entirely hollow construction except for a block of mahogany under the bridge to connect the top and back. This provides the woody, airy tone that hollow guitars are known for but without the stability and feedback issues that can be associated with such instruments. Featuring the traditional ‘f-holes’ you’d expect for a hollow guitar; this SE variant is aesthetically stunning thanks to the black gold burst finish, rosewood fretboard, genuine abalone bird inlays and chrome hardware. The SE Hollowbody II looks like a very expensive instrument even up close, with build quality to match.

It’s also a supremely comfortable guitar to play thanks to the 25” scale length, PRS ‘Wide Fat’ neck profile and beautiful fretwork. For anyone wanting an archtop style experience and tone without the large body shape, the smaller Hollowbody range is perfect, especially with the added versatility that a piezo bridge provides here.

Speaking of hardware, the SE Hollowbody II Piezo has a pair of 58/15 ‘S’ humbuckers delivering bags of clarity and dynamic range to the guitar for both clean and dirty tones. These are some of the best pickups in the more ‘affordable’ guitar world right now and deliver well above perceptions often associated with the price range of the SE lineup, rivalling the tones from the Core range at times.

Piezo tones are provided via a newly-designed LR Baggs/PRS adjustable stoptail bridge with discrete volume controls for the magnetic and piezo pickups. For the SE version, PRS has cleverly supplied a dedicated output for the magnetic pickups plus a ‘Mix’ output that combines both together or just the piezo signal if the magnetic output is used too. This allows players to send the piezo and magnetic signals to separate outputs or combine them as required and also ensures that you’ll always have magnetic pickup tones even if the piezo preamp battery runs out.

Combined with the 3-way pickup toggle switch and magnetic tone and volume controls, this piezo guitar is supremely versatile with the ability to blend in as much of the piezo signal as required for all manner of musical scenarios using the dedicated piezo volume control.

PRS also include a lovely hard case with the SE Hollowbody II Piezo, adding further value to an already exceptional package. If you’re after a Hollowbody guitar, this SE is well worth checking out regardless of your price point—it’s superb value of course, but it’s also a superb instrument in its own right that wouldn’t be out of place at a significantly higher cost. It seems PRS can do no wrong with their SE lineup!