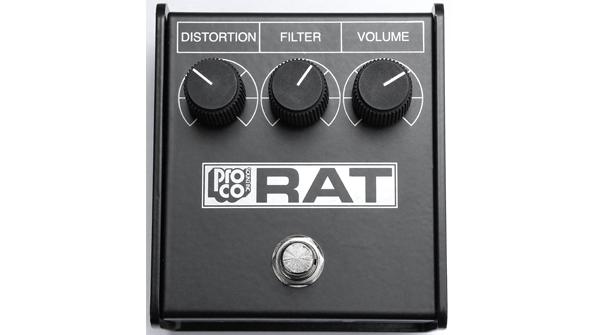 The Pro Co Rat pedal first burst on to the guitar scene in the mid '80s and swept through the guitar playing world like no other dirt pedal has. There was a good reason for this. It was really good. At lower settings it would act like a cool overdrive that would kick a good amp into some really musical high gain fun. At mid-way settings it would become a filthy animal that would turn the cleanest Fender amp into metal monster. And at its highest setting it would turn into the best retro fuzz like pedal, so good that Hendrix would probably have been using one, had he still been with us.

It found its way on many albums and was used by many of the biggest names of the time. I remember Jeff Beck being big on using one in the late '80s with his green Strat plus and a red knob Fender Twin. Since that first white logo version, Pro Co has put out various versions of the Rat, all sort of doing that 'Rat' thing, but apparently not in quite the same way as that original 1985 model.

Why? I think it's a lot to do with the LM308 chip that was in the first version, which if you know or are interested in such things, is the Corvette C7 of stomp box overdrive chips. These original issue white logo Rats are very sought after and collectable nowadays, and not ones to miss a trick, Pro Co has re issued it and called it the Rat 85 Whiteface reissue. We should be sceptical of re-issues, because there is usually a compromise somewhere in the manufacture, due to costs or parts no longer being made or available, but if we are going to believe Pro Co, which I guess we all are, this reissue is identical in every way to the original, which is very good news indeed.

This reissue has all the crucial features of the original. Which are, the white Rat logo, the same shape and size steel box, the same circuit board layout, the cool large CTS pots (labelled distortion, filter, volume), a true bypass switch (did the original have that?) and that crucial LM308 chip. It's not a huge list but it's a good one!

I was sent the whole range of Rat pedals to look at which consists of the regular Rat, the Dirty Rat, the Turbo Rat and this 85 whiteface reissue. Plus I own a Rat from around 1990, so it was like a Rat convention at my place! My first comparison was between the 85 and my second generation, early '90s version. I did a back to back comparison with same amp and same settings and couldn't really detect much, if any, difference, which made me happy because it meant my 1990 version held its own against this limited edition 85 reissue. I then spent the next hour comparing the other Rats.

The regular Rat sounded much like the 85 and my own one and did very similar things to the amp, which makes it very good value for money indeed! What the 'Dirty Rat' did was more noticeable in its differences in that it had silly amounts of squashy, fuzzy gain coupled with a bit more hiss. The one I really liked a lot was the Turbo Rat, however. It reacted more like a booster pedal with a fatter sounding overdrive, less hiss and generally nice tones all round. To me, the Turbo Rat was the winner at the Rat party.

Why didn't I review them all, I hear you say? Well mainly because to my ears they do all sound very similar, and the differences are very subtle so it wouldn't have made for good viewing. Safe to say, they all sound good and it just depends on your style and idea of tone, as to which pet Rat should belong to you. The 85 reissue is twice the price of the others and would be very nice to have but I am happy with my second generation pedal from 1990 or thereabouts. As I said earlier, the king Rat for me was the Turbo version. I thought it had something nicer in the tone that the others didn't. But if LM308 chips are your thing, then you probably need to go find yourself the 85 reissue.