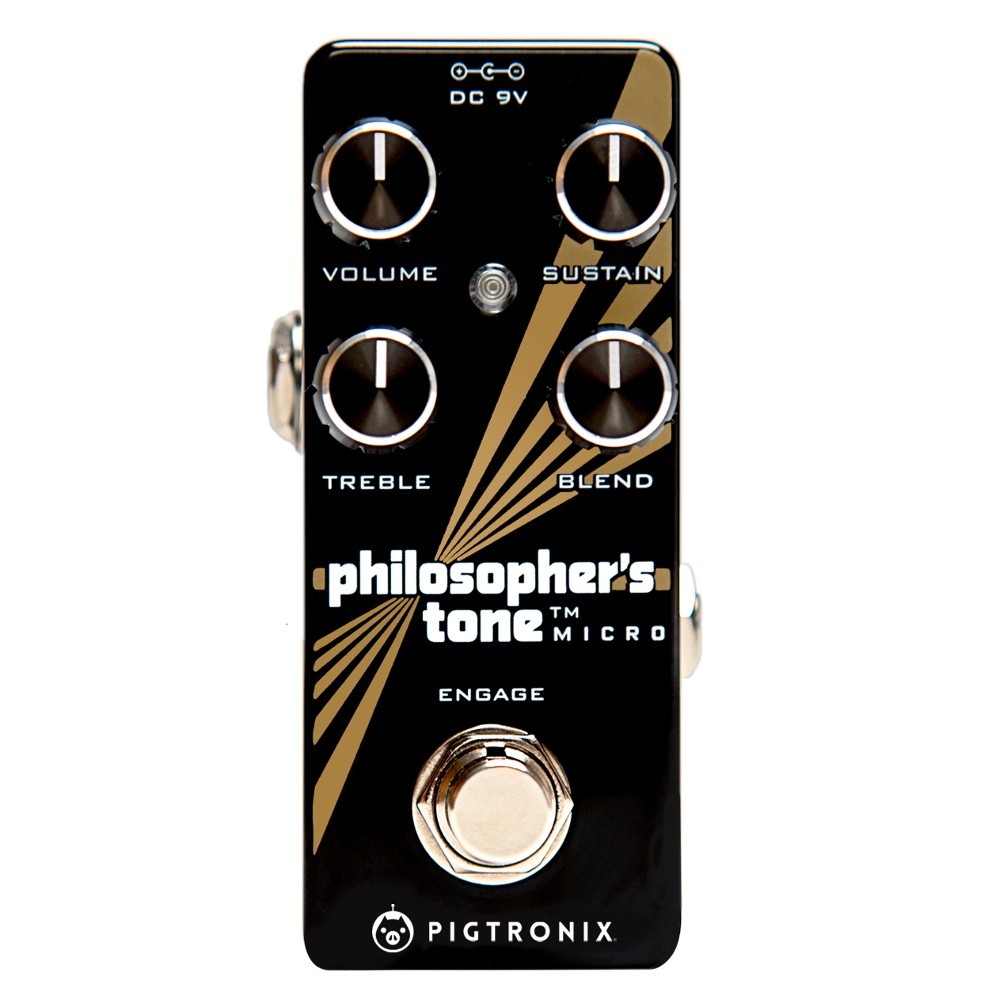 In use, the Philosopher’s Tone Micro delivers some excellent compression results for such a tiny pedal. Unlike a lot of micro form factor designs that can compromise on quality to bring the size of costs down, Pigtronix has produced a truly boutique level micro compressor that is very much worthy of the original’s name and reputation.

Gripped controls for ease of use

With an already growing reputation for its noiseless clean sustain, the Philosopher’s Tone stands out as a unique pedal in the already crowded world of compressor pedals. Tom Quayle puts the Pigtronix Micro pedal to the test.

The Pigtronix Philosopher’s Tone is a very popular compressor pedal, famous for its very low noise floor, even at higher compression ratios and lovely, musical grit circuit for adding some dirt to the compressed signal. As current trends in the pedal industry move towards miniaturisation of all things, it makes sense for Pigtronix to release mini versions of their most popular pedals. Thus, the Philosopher’s Tone Micro is born, sporting many of the features of its bigger brother but in a smaller 9volt package.

The original Philosopher’s Tone isn’t exactly a large pedal as compressors go, but features a slightly off landscape layout with the in and out on the same side. This makes it a little tricky to mount the correct way up on most pedal boards without taking up unnecessary room. The Micro version shaves around an inch off the length and width of the pedal and moves the jack sockets to the regular positions on the left and right sides, along with a standard centre negative 9v DC input on the top. The Micro retains the same Sustain, Blend, Treble and Volume knobs from the original but we lose the Grit part of the circuit, so this fifth knob is removed, saving space and making the small controls easier to adjust in the process. The controls are laid out in a 2x2 configuration as opposed to the in-line design of the original and Pigtronix have opted for gripped dials to make adjustments even easier on hot, sweaty stages.

The pedal is built to exceptionally high standards with a thick metal chassis and top-quality components throughout. Everything feels solid as a rock and built to last with reassuringly resistant dials and a latching footswitch that has all the satisfying clunk of shutting an expensive car door. It’s a surprisingly heavy pedal too, considering its diminutive appearance, but this just adds to the prestige and bomb proof feel in the hand.

Dialling in sounds is a simple affair thanks to intuitive controls. The Volume control allows for decent levels of clean, noiseless boost or to balance heavily compressed sounds to unity gain. The Sustain dials in the amount of compression from subtle to insane levels of peak reduction and sustain without adding any extra noise to your signal. Using the Blend control allows for parallel compression techniques where the original signal is blended back in with the compressed chain. This allows for more extreme compression ratios that make playing easier and give more sustain, but with a more nuanced and natural attack from the dry signal at the same time. Finally, the Treble control allows for up to 6dB of Cut or Boost at 2KHz to fine-tune the upper-frequency response of the pedal. Of course, all this tonal goodness is backed up by True Bypass operation, and 18v of internal headroom doubled inside the pedal from the 9v DC input to match the original Philosopher’s tone.

In use, the Philosopher’s Tone Micro delivers some excellent compression results for such a tiny pedal. Unlike a lot of micro form factor designs that can compromise on quality to bring the size of costs down, Pigtronix has produced a truly boutique level micro compressor that is very much worthy of the original’s name and reputation. Just like its bigger brother, the PT Micro has an exceptionally low noise level, even at higher sustain settings. This can be the bane of many compressor pedals lives, as they bring the noise floor up as compression settings become more extreme — not so here, where you get lovely, fast optical compression without degrading your original tone with excess noise.

The compression is delightfully musical and rewarding to play through, making things easier and more satisfying without being overly squashed, even at higher sustain settings. The Blend control, although found on quite a few compression pedals these days, is a lovely addition that allows for more natural sounding tones that are much easier to play through without killing your pick attack. Thanks to the low noise floor, the pedal excels at being placed in front of a drive pedal too, where other compressors may introduce too much noise in front of the gain circuit to be useful.

Pigtronix has done a masterful job at miniaturising their Philosopher’s Tone circuit design. For a very reasonable asking price, you are getting truly boutique level compression (with a blend knob) in a tiny package that won’t take up much room on your board at all. Fantastic stuff.

Treble EQ for Boost or Cut at 2kHz 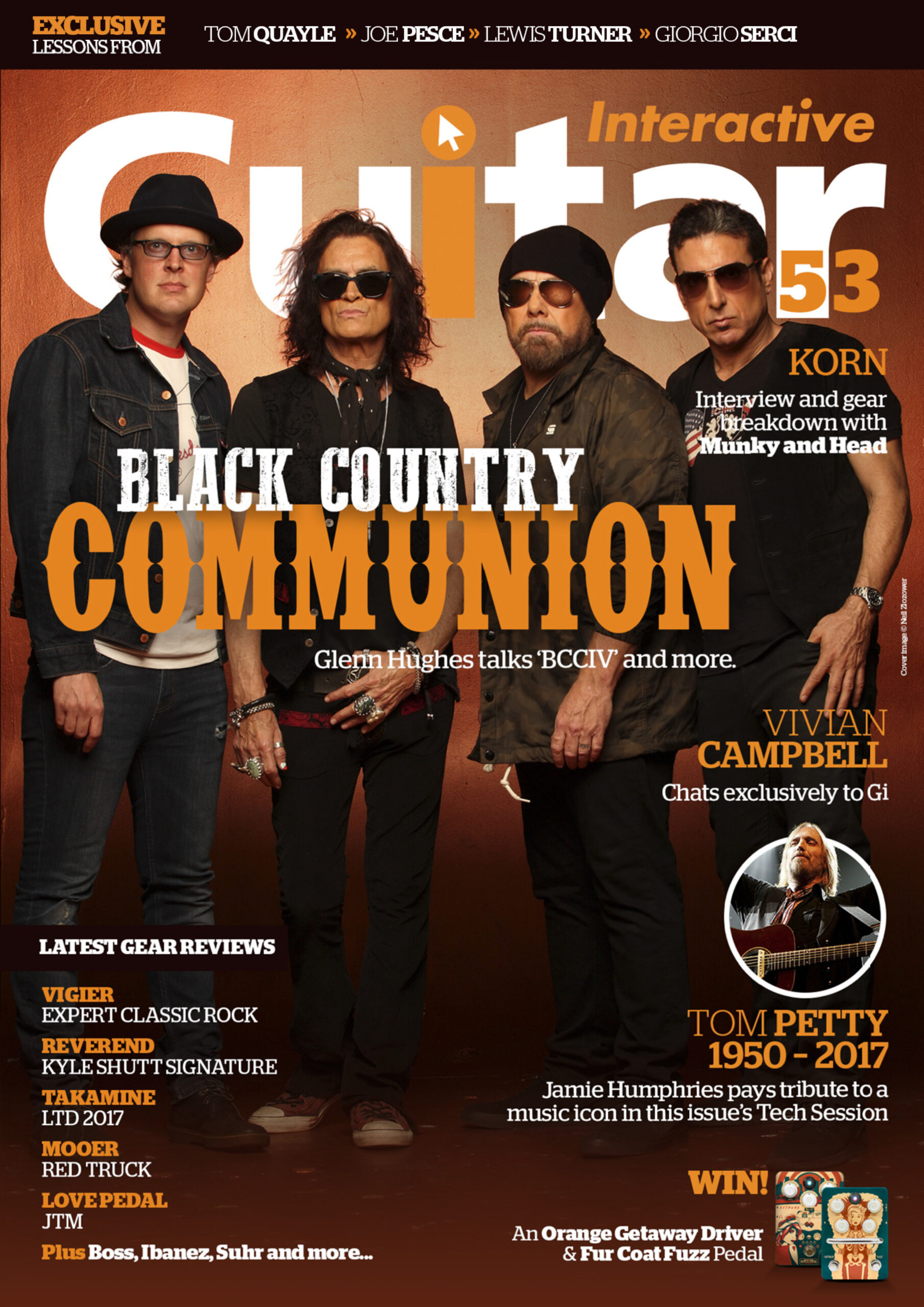