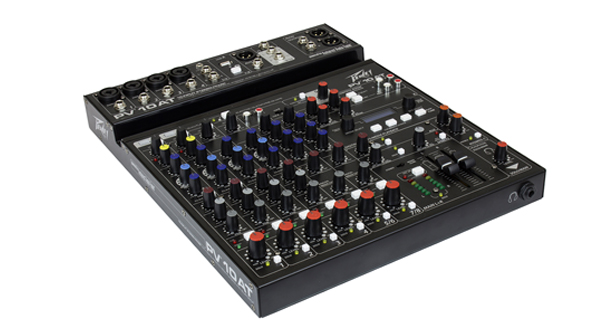 The Peavey Corporation - founded by Hartley Peavey in 1965 - has a long history, not only in guitar amplifiers, but also in PA equipment and mixing consoles. One of the newest additions to its product range is the attractively-priced and comprehensively-equipped PV10AT Compact Mixer, a combination of digital technology and traditional analogue audio engineering intended for use in both live and recording environments.

The analogue side of the PV10AT forms a fairly traditional 10/2 analogue console, whilst the digital dimension delivers on-board effects processing, Bluetooth stereo playback, USB stereo playback and recording and, unique at this price point, the famous (or infamous, depending on your point of view) Auto-Tune - an automatic pitch-correction technology developed by Antares that can be used on live and recorded vocal and instrumental performances to correct minor pitch variations, or to produce a semi-robotic vocal or instrumental effect..

When used subtly, autotune is virtually undetectable, and the technology is commonly used in commercial pop and R&B to “polish” vocal performances. Cher’s 1998 single 'Believe' was the first use of autotune as a vocal effect. Echoes from that track can be heard to this day in the work of many hip-hop and R&B artists and also, perhaps surprisingly, in 'rai' and other musical genres from North Africa.

Individual instances of autotune are available on the first two of the PV10AT’s four mic/line channels, each of which is also fitted with a 4:1 ratio compressor that can be used to tame an overly-dynamic vocal performance in order to avoid distortion further down the channel. The line input on Channel 4 is high-impedance to match acoustic and electric guitar pickups and an associated switch brings in a pre-shaped EQ curve specifically for a DI'd electric guitar.

Other than those added features, the first four channels are identically-equipped with a direct out, a high-pass filter, gain, bypassable 3-band EQ, aux send, EFX send (to the onboard FX), pan, mute switch, clip and signal present LEDs, a rotary level control and a solo switch and indicator LED.  The midrange EQ is Peavey’s proprietary “Mid-Morph” that cuts at 400Hz and 250Hz and boosts at 4kHz, to either clean up a muddy low midrange or boost definition when sound is a bit muffled.

Inputs 5&6 form the stereo “Analog Media” channel which gives you a choice of inputs - a 3.5mm stereo jack or L/R pairs of ¼” jacks and RCA phonos.  Inputs 7&8 make up the “Digital Media” channel whose input can be selected from either the front panel USB A socket (for playing mp3 tracks from a memory stick or drive), Bluetooth (for streaming audio from a Bluetooth device) or from the rear panel USB B which can connect to a computer or (via a camera kit) to an iPad or Android tablet for stereo audio playback and recording. These two channel pairs have a less-complex control set up than the first four channels – no direct output or high pass filter, a simple 3-band EQ, no EFX send a L/R balance control rather than a pan.

Finally, the ¼” jacks of inputs 9&10 are labelled “Stereo In”, have their own dedicated level control, and are sent direct to the main stereo output bus. This makes them the ideal place to return an external stereo FX unit that is being fed - via the aux master - by the PV10AT’s aux send.

The mixer’s Main L/R stereo outputs are fader controlled, can be summed to mono, are available on both XLR and ¼”jack and their levels can be monitored on twin, six-segment LED ladders. To allow you to leave the microphone channels set where they are during a break during a live gig while you are playing or streaming mp3 files (or to kill feedback instantly in an emergency) this control section is fitted with a microphone mute switch that removes channels 1-4 from the main mix.

The PV10AT has another two stereo outputs - labelled Control Room A & B - on RCA phonos that, as with the unit’s headphone output, normally carry the main mix but which switch to listen to the solo bus when any solo switch is engaged. Associated with these outputs are two switches, the first of which is A/B Select, which activates either A or B, thereby enabling you to connect two different pairs of loudspeakers so that you can check, for example, if your mix works on a small full-range speaker as well as it does on your main monitors. Alternatively, engaging the second switch, B/Rec, disables the A/B select switch so that A carries the control room main/solo mix whilst also routing the main mix to B to give you an independent analogue record output. Two rotary controls - Level A/B and Rec Level - control the volumes of those two outputs.

The digital section of the PV10AT, while having a far greater level of complexity than the mixer’s analogue portion, occupies quite a small part of the front panel real estate.  The USB section has only two controls, Record Level, which sets the volume leaving the USB B output for a connected computer or tablet and To Control Room, which manages the level of the USB B return going to the A/B control room outputs.

The status and parameters of the Digital Effects/Media Playback control section are displayed on a small, backlit screen. The Media Select control allows you to scroll through the contents of a USB drive, select a folder, navigate to tracks within it, and these tracks (provided that you’ve selected USB A on channels 7&8) can then be played back using the section’s transport controls.

Similarly, the EFX Select allows you to scroll through the available FX presets, choose and activate one, after which you can select an editable parameter and edit that if necessary. The EFX output can be soloed for monitoring purposes, returned, via individual level controls, to the Aux output to give some reverb on a headphone mix when recording and also to the main outputs when recording or playing live. A EFX mute function is also provided which can be activated wither by a front panel switch or by using one half of the optional twin footswitch that connects to FS jack on the front panel, the other half of which allows you to mute the autotune feature so that you can remove FX and autotune from your voice when you speak to the audience between numbers.

Auto-Tune itself is extremely easy to operate. Switching on autotune puts the PV10AT into Auto-Tune Edit mode where the EFX Select is used to navigate through the 25 Auto-Tune presets (12 each of major and minor scales in every key of the chromatic scale plus a single fully chromatic scale). You can also create a custom scale is each of the twelve possible keys – very handy if you’re into playing in a whole tone scale in D#! Once you’ve got your scale and key sorted, the display then changes to the Speed setting that determines just how quick and aggressive the pitch correction will be – 0 is the fastest (think Cher’s 'Believe' again) and 25 is the slowest (think early X-Factor before Simon Cowell banned its use). If you’re into some gentle autotuning and would like a little thickening, you can then add a little detuning and this same function can also be used to 'tune the autotune' in case you’re singing along to a badly-tuned piano in a pub.

The highest compliment that I can pay to the PV10AT is to say that it worked perfectly. The sound was clean and clear, the Auto-Tune and compressor functions worked perfectly, the Bluetooth pairing was simple, the USB memory stick playback couldn’t be faulted, connecting to a computer and an iPad was hassle-free, the FX sounded good and the whole package delivered exactly what it promised - and there’s even a slot to hold a tablet upright so that you can see your setlist.

If you’re a vocal solo or duo act that works with backing tracks on an iPad or memory stick and where an acoustic and/or or electric guitar is involved then you’re going to find it difficult to find a better all-in-one solution to your PA and recording needs. The mic/line channel direct outs could be used to feed an external multitrack recorder if you wanted to record rehearsals or (with a computer and a simple audio interface and DAW) record a CD for sale at your gigs, then you could quite easily accomplish those tasks with a PV10AT - especially given the autotune and compressor on channels 1 and 2.

The PV10AT is a really great little mixer that not only offers a lot of value at its price point but delivers a performance to match. I really liked it and you should take a look at it if it fits your needs. Highly Recommended.