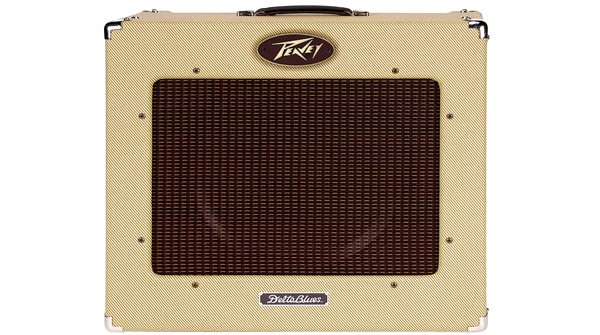 When I recently got close to the filming dates of the Learn to Play John Mayer DVD for Lick Library, I started wondering how I was going to replicate some of the great Mayer Strat tones. On the track listing, he uses three amps, made by Fender, Two Rock and the legend that is Dumble. Rock tones and high gain tones are relatively easy to get, but sweet, bluesy, dynamic singing tones are a whole different ball game, and that was exactly what was needed. After a lot of swearing, cups of tea, and pulling my hair out, I eventually stumbled upon a nice Mayer-ish tone using my 62 Strat, a Peavey Delta Blues, and a few pedals. The Peavey Delta Blues? Yes, this unassuming, vintage-styled combo not only saved the day for me, but seriously impressed with its amazing sound.

The Delta Blues basically shares much of it insides with the Peavey Classic 30. I own a Classic 30, and generally recommend people check one out when they are in the market for a good all-round, reliable, portable combo, for not too much money. The Delta Blues has some differences though - for example, a tremolo circuit, which is one of the nicest I have heard. It seems to be able to go slower, faster, and deeper than most I have tried. Again, I needed a nice tremolo effect for the John Mayer DVD on the song 'Gravity' and this amp nailed it.

Obviously we are talking all tube here, with three Electro Harmonix Sovtek 12ax7 pre amp, and four Sovtek EL84 power amp tubes in a two parallel pair, push pull output stage, giving class AB operation. That is the technical way of saying, "it sounds great!" It has two channels selectable by a footswitch which doesn't seem to be included with this one (shame!) and there is a little push boost switch for the crunch channel giving a 25dB gain boost. The onboard spring reverb is very musical if you don't overdo it. For reverbs, I tend to stick to digital verbs in the loop, but this spring reverb sounds usable. Talking of effects loops, I am glad to say the Delta Blues has one onboard, which again expands the sonic possibilities for use with any of those nice time-based effects you might have lying around! The styling is retro tweed Fender, and I have saved the best till last....... the knobs all go to 12..... which beats Nigel Tufnell's 11, any day!

I'm not going to say much about the amp's sound here as that;s what the video's for - and this really is an amp that needs to be heard rather than read about. The secret is in the name. If that Delta Blues sound is what you want then this is very likely to be the amp that delivers it.

I should say that the 15" version isn't the only one on offer, but I think the secret ingredient when it came to the Delta Blues saving the day for our recording, was the 15 inch Eminence speaker it's loaded with. You can get a 2x10 version, but for me, there is a little bit of magic when it comes to playing Blues with a 15 inch speaker. It also really liked pedals, and I got even closer to a JM tone when I put a Lazy J cruiser pedal in front of the clean channel of the amp. Thank you Peavey! Thank you Jesse Hoff of Lazy J amps! Once I had the sound, all I had to stress about then, was actually playing like John Mayer!

Fender has its own 15 inch beast with the Fender 65 re-issue Twin Custom 15, which is also a nice amp, but costs more money, and the Peavey delta Blues is certainly a very good comparison if you don't want to pay out that much. At really high volumes the Fender would have a little bit more articulation, whereas the Delta Blues will sound more like a smoking, on the edge, bluesy bar room brawler . It's 30 Watts, which means it is loud, but at band volumes, it doesn't have the clean headroom that obviously more power will give you. Still, for most sensible playing volumes, this will cover a lot of guitar styles easily. From Country to Jazz, from Funk to Blues Rock, the Peavey will handle it all. Two of these in stereo - especially with the right pedals -  would sound fantastic, by the way and I should mention that have also seen these amps used for Blues harp players and pedal steel players to great effect

Peavey gear is great. It's made in the USA, it is usually strong and reliable, reasonably priced, well made, and sounds as good as the player using it. I think you can be assured that the Delta Blues would be a reliable road and studio amp. Especially if you just happened to be filming a John Mayer tuitional DVD.