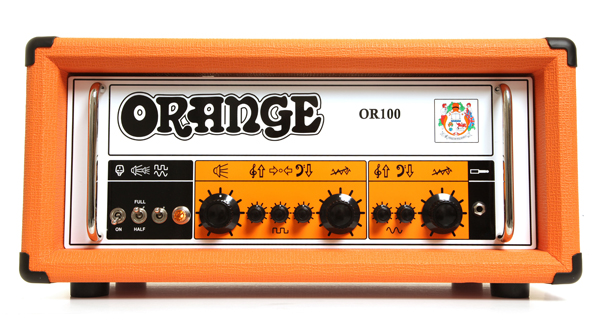 Launched at the 2013 NAMM show, the OR100H is a unique product in Orange's OR range, being the first to feature a twin channel design, tube-driven FX loop and foot switchable boost. The OR series has been established now as Orange's top line valve/tube amplifiers and the OR100H sits at the top, above the OR50 and OR15 models, making it a flagship amplifier in the company's range.  Orange describe the OR series as 'drawing on the heritage of the original and iconic 'Pics Only' launched in 1972' and visually it's easy to see the comparison as the OR100H sports the graphical logos of those classic amps and lacks any text references to each controls function. The similarity is not just aesthetic though, as some of the same construction techniques and tonal qualities remain from those original amps, though the features and versatility on offer have been brought right into the 21st century.

The OR100H is very solidly constructed in its bombproof orange chassis. Immediately recognizable, it is an aesthetically iconic design that retains the simplicity and ease of use associated with Orange products. Four 12ax7 preamp tubes, four EL34 output tubes and a single 12AT7 tube for the buffered FX loop, power the two-channel design. At 100 Watts this is a very loud amplifier that is designed to be played loud but Orange have added power switching options for half and full power modes on the front panel and a back panel switch giving access to all four power tubes or just two. This gives the user four output modes at 100W, 70W, 50W or 30W to suit any required scenario and allows for saturated power tube overdrive at lower volumes for the studio, rehearsals or smaller venues. Another benefit over the lower wattage OR's is the use of independent EQ's for each channel. The clean channel offers Volume, Bass and Treble controls whilst the Drive channel has Gain, Bass, Middle, Treble and Volume. A foot switchable gain boost allows for a pre-gain boost on the drive channel or a global boost for both channels.

Running the OR100H through our studio 4x12 cab fitted with V30s we immediately recognised we had a serious tone machine on our hands that was both stunning to play through and stunning in its versatility. Starting in 70W mode, with the clean channel you get a highly touch responsive and dynamic clean tone that sounds superb with both single coils and humbuckers. The tone is very inspirational and will bring out the best in your playing style with an EQ section that is versatile enough to produce all the classic clean tones guitarists love. In 30W mode we pushed the volume about ¾ of the way up and produced a beautiful crunch sound full of overtones and bite at a volume that won't kill your ears. Clean headroom in 100W mode was more than you would ever need, so if super clean is your requirement you'll find it here!

Channel 2 is capable of both modern and vintage drive tones, ranging from light Blues tones to raging modern Metal sounds, thanks to the very musical and versatile EQ controls. As with the clean channel, single coils and humbuckers sound great and with a delay or modulation effects in the tube buffered FX loop you can really dial in incredible tones for all manner of styles. Switched down to 30W mode the drives sound just as good as in the 100W mode, making this a superb choice for guitar players who need a single amp for the both stage and studio.

Orange has really hit the tone jackpot here with the OR100H. The OR series has always been respected since its launch but with the addition of a dedicated clean channel, foot-switchable channels and boost, FX loop and great EQ controls the OR100H really is in a league of its own - I want one! It's even well priced for a UK-made amplifier built with real care and equally as capable as some of the more costly 'boutique' equivalents. That's why we've awarded it the extra half star - it's not just great - it's a bargain, too! Highly recommended.