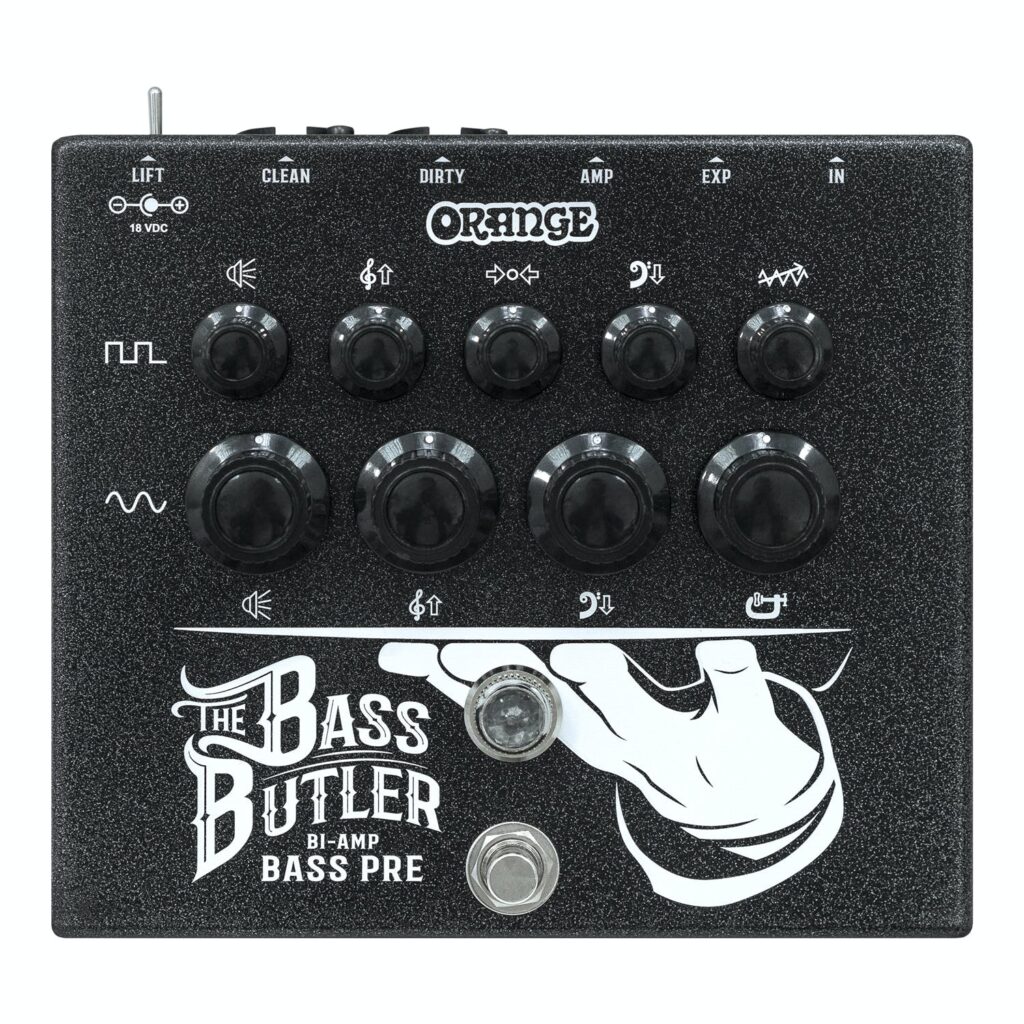 The Bass Butler from Orange is the ultimate fly rig, the perfect studio tool, and quite possibly the only pedal you'll ever need. Featuring a sturdy steel enclosure, 18V DC power for high headroom, and all-round road-ready ruggedness mean that the Bass Butler is willing and waiting for a lifetime in your service. Dan Veall tells us more.

It seems that almost every week a new drive pedal appears on the market, either on shop shelves or through the boutique online marketplace - pretty much every flavour of drive you can imagine is now catered for with us bassists in mind. We no longer have to rely on complex effect loop pedals to be able to dial in the lost low end that is encountered from plugging into a guitar distortion pedal.

Today, Orange has brought us the Bass Butler to get down to business with, and it was immediately obvious from the get-go we were in for a treat as I began effortlessly dialling in my first gritty sounds with the unit.

What makes this pedal of interest to me is that it really feels like you are running into both a bass amplifier and a guitar amplifier at the same time, rather than just a distortion pedal. (FYI, You won't actually damage a guitar amplifier running a bass into the drive channel. That's a video for another day! Just watch your volume and what the speaker comes are doing!)

This isn't a new technique by the way, some of my favourite bassists are well known for recording their bass through both to create a richer sound. In this scenario, the bass amp provides all the low end and depth, lower midrange frequencies and warm grit (should you need that too) - the guitar amplifier with its speakers suited to the upper midrange frequency range will complement nicely when blended. With more gain available to play with from a guitar set up, it's possible to run more drive on the top end than low end thus giving you more control over the resultant tone without the low frequencies becoming less coherent, something I hate!

The Bass Butler is exactly that - a bass amplifier circuit and a carefully tailored "guitar amp" style circuit - and what's more, both XLR outputs feature speaker simulations from paired configurations - an Orange OBC410 bass cabinet for the bass amp side and an Orange PPC412 guitar cabinet for the guitar side. It's almost too simple! The socket marked "Amp" is a blend of the two signal paths but doesn't include the cabinet emulations, which makes sense as you're going to be running the pedal in to an amp and cabinet anyway - which is what you are hearing in my review - my Bergantino reference rig was mic'd so you could hear what the pedal sounds like through a single amplifier.

As usual, I want you to check out the video review as I explain each control. Simply though, two rows: The top row is your guitar amp sound. The "square wave" icon on the left-hand side suggests a clipped waveform or "distorted" and underneath a sine wave suggesting a clean signal waveform. - the bass amp sound.

Distortion naturally compresses a signal, so it makes sense that there is a compressor on the clean channel too. But, nay, this is no ordinary compressor! If there's something that Orange has seemed to nail (on the Little Bass Thing as an example) is a compressor that changes the colour, character of the amplifier and this is also immediately noticeable in this pedal. Advancing the dial adds level as the make-up gain of the compressor is actually quite severe verses that of a studio compressor. The effect adds tons of midrange punch and an uncanny "tubey" feel and there's an assuring sweet spot to be found. Visual indication that you have hit the effect threshold is via a red LED that flashes within the pedal indicator above the footswitch. It's subtle and we found it difficult to see under the bright lights of the studio.

The clean channel is active all the time and the footswitch onboard brings in the drive channel - which I believe is probably the best way to have the pedal configured, unless of course you specifically wanted the whole device bypassed. I suspect that wasn't the plan from Orange though, seeing this as an "always on" clean signal that would be ran to front-of-house for live use.

Orange has had the foresight to include an external control of the drive channel gain: All you need is an expression pedal connected to this socket. You can throttle back for a mild grit or push the pedal forward to access face-melting saturation!

The pedal itself, as you can expect from Orange is pretty bullet-proof and designed to deal with the rigours of the road. It is much larger than that of other pedals available on the market that offer a similar configuration, but I think you'll forgive that when you hear what it can do. You may even decide to lose a pedal or two off of your existing board that would otherwise be required to offer what this can in one box.

Rounding up then, we have a versatile pedal that concentrates on one specific feature set, I.e. blending amplifier sounds for anything from a very mild "tone warmed up" bite to a full out gain assault.

It does sit in a higher price bracket, but then you are saving the cost of buying two amplifier rigs 🙂

It is, as I said above, surprisingly easy to use considering the range of sounds available from a well thought out design.