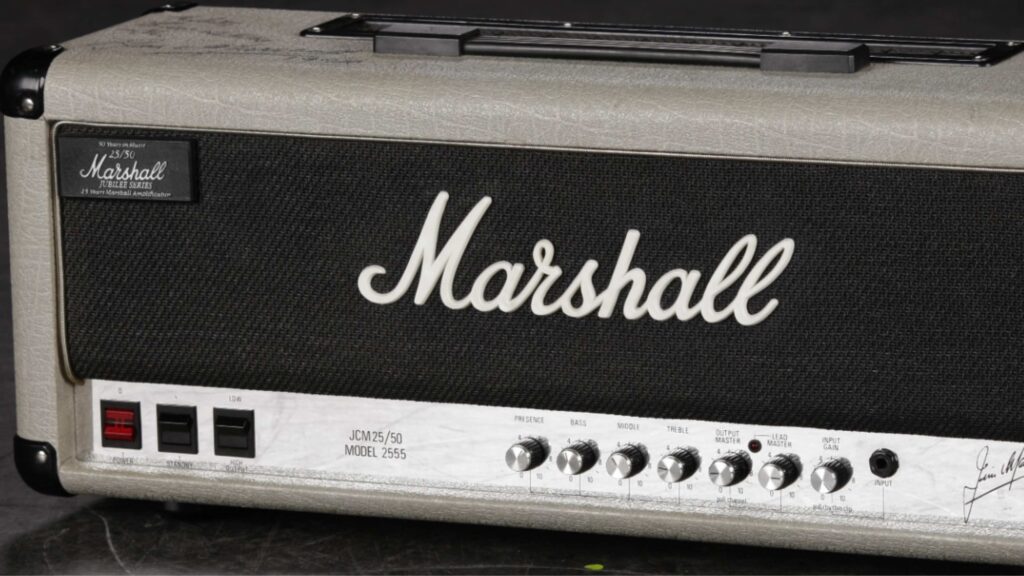 With 2020 being such a dire year for musicians and the gear industry all over the world, release schedules have been disrupted for new gear left, right and centre. Here at Gi, we're never inclined to rest on our laurels so, while we wait for more new releases, we thought we'd check out some modern and not so modern classics that have become staples of the guitar world for good reason – starting with the Marshall 100w 2555x Silver Jubilee Reissue head. Tom Quayle elaborates on this fantastic piece of Marshall history below.

I've wanted a Silver Jubilee for years now, having had a zen-like moment hearing Wayne Krantz blasting through one at the 55-bar in New York back in 2004, but I could never really justify the price of an original one. Over lockdown, I bit the bullet and stumped up for the 100w 2555x reissue head and matching 4x12 cab (my poor neighbours) at a frankly amazing price here in the UK. The wonderful and hugely missed Mike Casswell originally reviewed the reissue Silver Jubilee in issue 36 way back in 2015 and loved it, so it made sense that I would find great pleasure in this fantastic Amplifier too, given how great Mike sounded through it.

The original SJ was released in 1987 to celebrate 25 years of Marshall amplifiers and 50 years of Jim Marshall in the music business. Heavily based on the JCM800's output section but with a new preamp and EQ design, the 100w 2555 model quickly became a classic, used by Slash, John Frusciante and Alex Lifeson for its archetypal high gain 80's rock tones. Only produced in its silver livery for that anniversary year, the 2555X was released as a reissued version in 2015 featuring the same circuitry and design but with a slight redesign of the back panel and fixed voltage wiring for each country.

Sporting the same quartet of EL34 100w power amp valves as the original with a half-power 50w mode switch on the front panel, the 2555X reissue amp is a genuine all-tube 100w monster with enough volume to fill the biggest of venues, especially paired with the matching 4x12 cab. A trio of ECC83 preamp valves provide a ton of preamp gain that can be dialled in across two channels with a shared 3 band EQ and presence control. The EQ on the Silver Jubilee is interesting as it differs greatly from the JCM800 amplifier that inspired the output stage design. There is a lot more EQ power on tap here with a much wider sweep on each of the three bands, allowing for far more variety in the tones that the SJ can produce from both channels.

The preamp features an overall input gain control that dials in the amount of dirt across each channel and can be pulled out to engage a clipping diode circuit (Rhythm Clip) for an extra boost on either the clean or dirt channel. This clipping circuit has always been a love it or hate it feature for most people, but it's a great addition to the amp's array of tones and works superbly on the clean channel for edge of breakup and crunchy tones, especially with single coils.

Further versatility is achieved using the separate Output and Lead Master controls, allowing you to really shape the tonal characteristic of the drive channel. With the Output cranked and Lead Master pulled back, you gain more clarity and dynamic response from dirty tones. Crank both, and you achieve more gain and thickness and of course more overall volume. The Rhythm Clip mode allows you to achieve similar high gain tones at lower volumes, especially using the 50w half-power option.

As with many higher gain Marshalls, the 2555X can get a little woolly in the lower end at the highest gain settings, but the powerful EQ fixes the situation easily, and the amp sounds incredible at lower gain settings with a boost pedal pushing the front end hard. With high output pickups or kicked with a pedal, there is enough gain on tap to satisfy the most gain hungry of you out there, and it responds beautifully to backing the volume off on your guitar or a lighter pick attack. The clean channel works great as a pedal platform and is more dynamically responsive than you might imagine for a higher gain Marshall head, but of course most people buy this head for those killer crunch and lead tones.

It's amazing just how versatile this 100w beast is though, a fact that's borne out in how beloved it is across such a wide variety of players from Slash, to Bonamassa to Wayne Krantz and many more. These guys all sound so different from one another but have pulled incredible and unique tones out of this amp in hugely different musical settings. A quality series FX loop, DI Out and five speaker outs ensure you're good to go in any gigging situation and for those that want an amp like this at home or in the studio, the prevalence of fantastic sounding attenuators and speaker simulators (such as the OX and Torpedo Captor X) on the market make 100w and 50w amps perfectly plausible in these environments again.

Here in the UK, this reissue amp represents incredible value too – perhaps less so in the US and elsewhere given the inevitable import tax applied to the cost, but considering that these are built in the UK and sound so good with such a versatile tonal palette, it's no wonder they've become such a classic. Now if only I could find an original to go with my reissue at a bargain price!