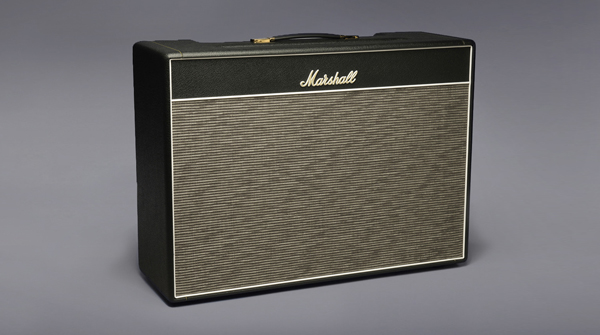 Certain guitar amps have taken on iconic status due to the music of the time and the players that used them. Undoubtedly one of the most iconic of all is the 'Bluesbreaker' 1962 Marshall combo, which was the nickname history gave the amp after it was used by a young Eric Clapton on John Mayall's eponymous Bluesbreakers album, released in 1966. This was the first combo Marshall made and the combination of a Les Paul, Eric's playing and the sound the amp made when cranked up, was enough to single-handedly launch the huge British Blues boom of the '60s. But you know all that right, because when Eric plugged into that original Marshall combo nearly 50 years ago, the combination rewrote the rule books (some say it more or less invented the sound of the modern electric guitar - Ed).

Now, Marshall has gone right back to its roots and attempted to recreate the original 1962 as closely as possible, as one of a series of handmade amps it's calling the HW (handwired) series.

When you listen back to that 'Beano' album today, it certainly is a great guitar sound. But we have to remember that a lot of factors went into it. How it was miked, the type of mikes used on the session, the room, the quality of components like the valves Marshall used at the time, the speakers in the amp, that particular Les Paul and, of course, Eric Clapton's touch - all these factors played a part in creating those tones on that album. Interestingly, nobody knows for sure which speakers were in the actual amp Eric used on that session, but on this modern re-make Marshall has gone for a pair of Celestion G12c Greenback drivers, which sound great but are nowadays made in China rather than Ipswich in Suffolk, so again will be different to Celestions of the past.

In fact there will be many differences between our modern re-make and those original '60s combos. Different quality of tubes, different tolerances, different transformers (although Marshall has tried to get as close as possible to the original specs). All the workers who handmade those originals are gone, as are even the companies that supplied Marshall with the other electronic components to make their amps. Back then, the same model of amp could sound very different to each other depending on who built it and which components were used. And to that you need to remember that Marshall was constantly refining and tweaking.

I'm saying this not to try and out you off but to point out that if you are in the market for the 1962HW, you have to realise that what you are buying can never be exactly same as the amp Eric used all those years ago - but it can be close. As long as you get that, you can then approach this superb amp with a more informed attitude.

Obviously, the look of this amp is totally iconic, especially if you are a Clapton fan, as I have always been. It certainly makes an impression and makes its presence known visually. It's loud too, especially for a combo rated at just 30 Watts. The sound is thrown backwards as well as forwards due to the open back cab design and I generally prefer open back cabs, which are less directional and fill a stage much more than closed back types. This amp could easily handle any band situation you threw at it.

It has the traditional bright and normal inputs and the sound gets closer and closer to what we associate as the Bluesbreaker tone, the more you wind it up - especially when using a Les Paul. This won't be an amp you could easily use at home because it loves to be driven, and the neighbours will not be thanking you if you take the volume pot much past 2! You could get the amp to break up at lower volumes with some kind of boost or overdrive pedal that pushes the front end, and like all tube Marshalls, this amp reacts with pedals brilliantly but, again, if authenticity is your goal, that isn't how the amp was originally used.

Output valves are KT66 which give a chime and depth to the tone when you roll back your guitar volume, whilst four ECC83 pre-amp valves give you the grit and breakup. As you turn the amp up to stage volumes you will then be getting breakup from both pre-amp and output valves together, which produces a fat bluesy roar, all very controllable from the volume pot on your guitar (which is how things were done before we had channel switching and pre-amp gain stages). There is a very generous length of cable for the footswitch which activates the valve driven tremolo circuit which is also a very musical sound with adjustment for speed and intensity, not easily reproduced by your average stomp box. Rather than me try to convey the fabulous sound it produces, just click on the video - it's worth a thousand words!

The Marshall 'Hand Wired' series amps are as close to those iconic originals as Marshall can get in 2014, and these modern day versions would probably be more efficient, more consistent and quieter than the originals would have been back in 1966. There will always be absolute purists out there that would prefer to handbuild their own versions of the originals, sourcing original military grade transformers and 'new old stock' parts, but Marshall built the originals and have faithfully recreated beautifully what these amps were about and they deserve our thanks and congratulations for doing so.

These are labour intensive amps to build, and that is reflected in the cost. But what you get won't break down and will be covered by Marshall's second to none after sales service. I am lucky enough to have played through one of the originals that's kept in the Marshall factory museum, and to be totally honest, this remake sounded noticeably better. I would also be embarrassed to tell you how many Marshall amps I own, and now I want another one.