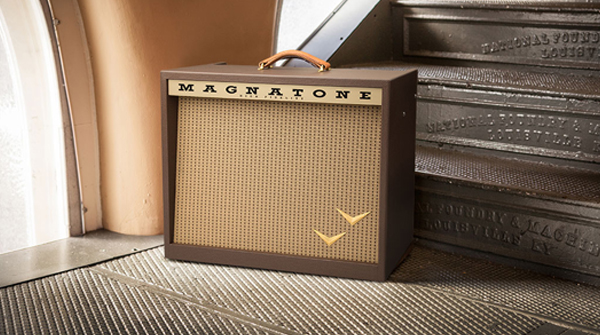 Magnatone's reincarnation exploded onto the amplifier scene. What could have been 'just another old name cynically revived' turns out to have been a major project not to trade on a half-forgotten memory but to lovingly recreate a great name – and then enhance it. Already being used by the likes of Neil Young, Billy Gibbons and Jeff Beck, Magnatone is out to shake up the amp market. Tom Quayle wasn't just shaken, he was stirred, too.

Magnatone began life as an amplifier company back in the 1930s and became renowned for amps with incredible tone, a patented pitch shifting vibrato circuit (as opposed to the more common tremolo circuit as found on Fender amplifiers) and a stunning art deco design aesthetic that even won the company awards from the Los Angeles Museum of Art! Despite some successes in the 1950s and use by artists such as Buddy Holly, the brand ceased production in 1969 and remained dormant until Ted Kornblum decided to revive it. Ted who? Ted Kornblum is a major player in the US music industry. His father started St Louis Music and his father founded not just Crate amps but also Alvarez guitars. The story goes that Ted found Magnatone in old catalogues and decided to investigate and then revive the company for the 21st century.

Reintroduced in 2013, the Magnatone range has grown rapidly and is now quite complex. You could spend a lot of time just drooling over the company's website! One of its latest models is the diminutive ‘Panoramic Stereo’ combo, a more compact alternative to the company’s ‘Twilighter Stereo’ amplifier, offering true stereo operation and Magnatone's real Pitch Shifting Vibrato circuit from a pair of 12 Watt, all tube power amps and two custom 10” speakers, all housed in the classic Magnatone Art Deco brown and gold cabinet design. The Panoramic Stereo is powered by a pair of 12AX7 (Ecc83’s) for the pre-amp with a single 12AU7 for the full length Accutronics spring reverb plus a quartet of EL84s in the power stage for a total of 24 Watts from the two power amps running in stereo. The amp is compact in size at 20” x 22.5” x 10” but with a reassuringly hefty weight and incredibly solid build quality.

The control layout is very user friendly with simple Volume, Treble, Bass and Reverb controls for tonal shaping plus the Stereo Pitch Shifting Vibrato section with Intensity and Speed controls and a switch for changing from FM Vibrato mode to AM Tremolo operation as required. There are two inputs for true stereo operation from the front end, matched with a pair of extension speaker outputs and a pair of line outs for recording, both labelled as left and right for easy cabling. Finally, you get a bomb proof footswitch that controls both the reverb and vibrato operation that feels every bit as luxurious as the amp itself.

The overall design is stunning and immediately recognisable as Magnatone with a large logo emblazoned on the front, brown Tolex and an angled speaker grill with gold ‘V’ shapes in the bottom corner to enhance that Art Deco, vintage vibe. This aesthetic is mirrored on the control panel, situated around the back of the amp and angled upwards for easier operation with its vintage styled knobs and monochrome palette. Everything feels superbly well put together with fluid controls and a satisfyingly solid click from the standby and power switch that can only be likened to feel of shutting a high quality executive car door - the Magnatone exuding a similar feeling of luxury throughout.

This luxurious feel extends effortlessly into the Panoramic Stereo’s sound and it’s very easy to see why luminaries such as Jeff Beck, David Gilmore and Billy Gibbons have been charmed by the tonal delights of these amplifiers. With the volume set conservatively (this is a very loud amplifier) the clean tone is one of the best I have ever heard and played through with a dynamic response and feel that puts most other amps to shame. It’s just so much fun and incredibly rewarding to play, eating up all manner of pedals for breakfast and giving you a tone that makes you feel like you are part of the Rock and Roll royalty that have used these amps throughout the years.

Running a stereo delay or chorus into the front is an almost religious experience but, if this isn’t an option for you, simply switching on the stereo vibrato effect gives you a tonal width that is hard to believe from such a small combo amplifier. The spring reverb has a huge amount of effect on offer and required subtle settings to not drown the original signal, but it’s a lovely, thick sound and every bit as good as the amplifier deserves.

Pushing the volume control as far as we could stand in the room offers up crunch tones that have an impressive amount of bottom end thanks to the semi- closed back design. You can hear the power tubes saturate and bring in a huge amount of warmth to your sound that will easily compete with even a loud a drummer.

This is an exceptional amplifier with some of the best clean, edge of breakup and crunchy tones you will ever hear, although it’s worth bearing in mind that there is no master volume, so crunchy tones are only available at maximum volume settings and there is no effects loop. Having said that, this is pure tonal bliss from start to finish and who needs effects loops and master volume controls when the sound is this good in the first place?!

Naturally tone this good costs a decent chunk of money and the Panoramic Stereo is an amplifier that could be described as existing in the aspirational category with a price tag that matches the quality of both tone and construction on offer. For me though, the amp is worth every penny and might just be one of, if not the best stereo amp on the market in this compact combo format. Amazing stuff.