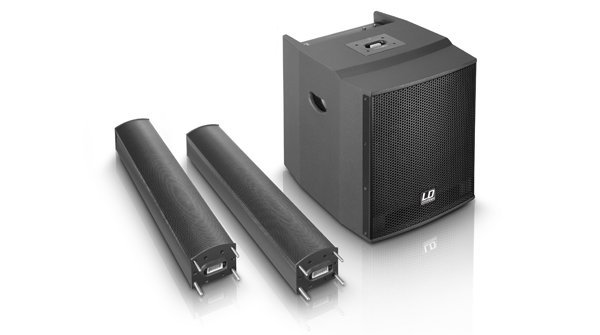 If you thought line array systems were solely for auditoriums or those with loaded wallets, think again! Tim Slater assesses LD System's MAUI 28.

Via an appealing combination of portability and plug-in-and-go simplicity, compact line arrays like LD Systems' user-friendly MAUI 28, aim to take the hassle out of setting up a PA for small venue gigs. There is an increasing amount of choice in this sector and in this, our first issue of LIVE SOUND! we've looked at three approaches to tackling smaller gigs, each slightly different. In the case of the LD MAUI 28 the German manufacturer has used the line array concept which, without going into the complex theories that have made line arrays the majority choice for most full-size touring rigs and installations these days, aim to give superior sound quality and coverage to that obtained from traditional 'point source' systems. OK, that's hotly contended - but line array remains the current big idea.

At first glance the MAUI 28 appears to take a stylistic cue from Bose’s L1S compact line array, at least insofar that it similarly features a vertical stack of midrange and treble speakers that simply ‘click’ into place directly onto the separate powered subwoofer via a cable-free modular system.

The Bose system was typically revolutionary when it first appeared but, sadly doesn’t come cheap. The LD system isn't cheap, either, but it is more affordable and while MAUI 28 might not offer quite the same level of refinement as the Bose product, the LD Maui 28’s tall thin speaker array and compact sub still requires only a relatively miniscule amount of floor space. Fully assembled the LD line array and sub adds up to maximum height of approximately 4’ tall (3.9 meters) and its tiny footprint suggests that besides serving a solo performer, duo or small band, it could  fit equally well into non-musical applications like exhibitions, places of worship or conferences.

The MAUI 28 (MAUI is an acronym of ‘Multiple Array User Intensive', by the way) delivers a total of 400 Watts peak that is divided equally into 200 Watts apiece for the vertical speaker array and the separate subwoofer. On paper this might not look particularly impressive, but even a single MAUI 28 should easily be powerful enough for small events with audiences of between 50-80 people.

A loud five-piece Rock or function band will definitely need to upgrade to a pair of MAUI 28s for greater headroom and projection necessary to overcome the sound-deadening effect of a large group of people standing (or hopefully dancing!) directly in front of the PA but that's a perfectly scalable solution for users.

Portability isn’t an issue thanks to the MAUI’s compact size and relatively light weight (36.8 kilos or 80lbs fully assembled), not forgetting that the vertical array also breaks down into two parts, reducing the whole system to three sections for easy transport.

The compact LD Systems sub is constructed from 15mm plywood finished in a tough scratch proof paint; with a steel speaker grill protecting the pair of 8" drivers from accidental damage. The vertical array’s aluminium casing is much lighter than the sub but the line array’s perforated speaker grills still contribute to the system’s convincing air of general roadworthiness.

The sub’s chassis is dominated by the enormous heat sink, which is located just below the control panel. The heat sink is a major contributor to the sub’s solid, planted feel but despite weighing-in at a fraction under 30 kilos the sub is still easy to pick up. However, if the thought of lugging 30 kilos over any distance doesn’t appeal, LD Systems helpfully offers a separate castor board among a range of accessories for the MAUI 28 that also includes a nylon bag for the line array speakers.

This PA system’s modular design negates any conventional cabling. Once assembled the vertical array’s four mounting pins slide into corresponding holes in the top of the sub. The left and right pins are sized differently and have corresponding holes in the sub, making it virtually impossible for even a total novice to mount the vertical line array back to front or upside down!

Powered-up, the MAUI 28 has two rotary controls; a master volume and a separate mix control that blends in the sub’s formidable low-end thump. A single MAUI 28 is capable of functioning as a stand-alone system thanks to a pair of stereo combi inputs that accept either XLR and standard ¼" jacks, complemented by a pair of stereo RCA inputs for connecting an MP3 player or an iPod. Dual XLR outputs link the line array to a second separate system when extra volume is needed.

A maximum of two microphones can still be connected directly into the sub via the combi inputs for a very basic setup, speeches for example, but a mixing desk is essential for situations requiring multiple vocals and separate instruments.

One distinctive feature about the Maui 28 is the clarity of its sound, which borders on hi-fi quality compared to most conventional powered enclosures. The vertical line array orients its 16 3" powered speakers over 120 degrees of dispersal, which is significantly wider than a conventional speaker stack. A performer or speaker can stand next to the MAUI 28 and still be able to hear everything clearly without need of a wedge monitor. With the sub handling the low end frequencies of 45hz the line array’s 16 speakers are divided into four groups of four: the lowest handle low-mid, the next group low-mid & midrange, the next midrange and high-mid, the final four are mid, high-mid & treble while a 1" tweeter located at the very top takes care of the high treble range around 20kHz.

This MAUI’s bright sound occasionally borders on the shrill but the sub’s mix control tunes the system by allowing the user to dial-in more low end, helping to calm down those piercing highs. The overall volume level is very good for such a small unit and the extra sound dispersal afforded by the radial speaker array feels noticeably less one-dimensional compared to a standard full range PA, where the sound begins to lose focus as soon as the listener has moved out of the direct line of fire, as it were - which, of course, is one of the key advantages of a line array system.

So, the LD Systems MAUI 28 represents a very reasonably priced and well-made alternative to the obvious alternative portable line array. We were pleasantly surprised by the high quality sound reproduction and the user-friendly setup/tear-down afforded by the neat modular design. A band will need more than one but the mobile solo performer or small band performer should find this system is more than adequate, provided they use a separate mixing desk.