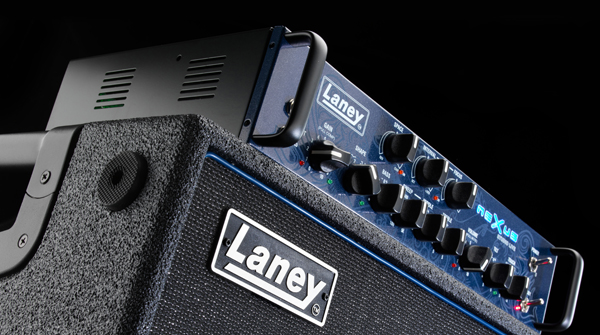 Laney has recently been creating some truly innovative products for guitarists in the shape of its IronHeart heads and studio guitar products such as the IronHeart Studio rack. The 'IRT Studio' is a superb recording system as well as a live performance tool. Naturally, it wasn't long before we bass players started shuffling our feet and asking if there were any chance of something similar for us too. Enter the Laney Nexus SL 'Studio Live' valve/tube pre-amped head and cabinets. 'Nexus' is part of Laney's bass range and I hope you'll have seen my previous reviews of the Nexus TUBE and Nexus FET heads to give what follows some context. (You can find earlier reviews via the search function on our news website at www.iguitarmag.com - Ed).

As I've said in my video review, the Laney's front panel is chock full of features that will keep you busy creating, that's for sure. Many of those features are accessible via a foot switch as well and you'll be happy to hear the Nexus SL includes a foot controller and even a very useful bag for carrying everything! Laney even includes a pair of 'rack ears' that can be fitted so that the SL will happily live in a rack system for added safety should you want it to.

Across the front panel, the controls for gain level, semi-parametric EQ and master level are pretty familiar on a standard bass head, though I have to say that these controls offer a wide range of adjustment even before we dive into the deeper functions of the SL. There is also a pre-set compressor that is accessible with a pull switch on the gain knob. There is no separate threshold knob for this.

Above the equaliser controls are three 'fast access' effects knobs giving you either a mix of chorus or reverb effects via the 'space' knob. Advancing said knob from a centre position in either direction will add intensity to each effect; chorus one way, reverb the other. Similarly a 'dual effect' control next to that marked 'interval' offers a cool octave below effect counter-clockwise and a fifth above effect clockwise. I have to point out that we managed to have a 'wobble free' octave note even down to my open E string! Finally, paired with this control is the focus parameter. This control adds top end clarity to the effect, best heard with the +5 setting, or reducing the level helps to get the wet effect to sit more smoothly with the direct bass tone.

Moving across, the SL has a master volume control with a pull mute switch - muting of the bass signal being available underfoot too. To the right, two featured controls are: “tilt” - a sort of see-saw EQ that when turned to the left boosts low end and cuts top end or advancing to the right boosts top end and cuts low end - a great way to tailor your sound to a room or mix without messing with your more subtle settings on the main EQ. Next, “touch” - a way of adjusting the way that the valve pre-amplifier reacts to touch sensitivity. Although subtle, and in our case actual hard to hear differences, the manual suggests turning the control clockwise makes the sound more open and anti-clockwise 'tighter and faster'.

Providing the muscle and volume in this surprisingly lightweight package are not one but two 500W D Class modules wired in dual mono - so this isn't a stereo amplifier as such - but it does mean that you can hook up more cabinets than you'd expect than with just a single output. For example, you could connect two 8 ohm cabinets to each output giving you four cabinets for trouser flapping bass behind you on stage. That's right, even a pair of Laney 8x10 cabinets powered from one head! Your guitarists will be taking cover!

From the stage to the studio, the Nexus SL really shows what it can do. You can run the SL without speakers connected and in that mode it becomes a recording interface providing you with input and output connections to your computer based recording system via a USB connection. But it doesn't end there!

All the connections you need, including a configurable D.I, serial effects loop, headphone output and auxiliary input are provided around the back but it's important to understand how flexible the SL really is as these connections do more than just provide simple in and outputs. The SL is capable of 're-amping', a method of recording that allows you to track both the sound of your dry bass and that of the 'wet' signal path output with all that lovely valve tone, EQ and effects on. Later, if it is decided that you delivered a flawless performance in your recording, but the EQ on the SL was set incorrectly, then the dry signal can be fed back through the SL from your DAW, tweaked and re-recorded in real time - even without you being present since your original instrument performance will have been preserved!

You can even use the SL not only as a recording interface but also as a sound card for your normal computer music player too - the stereo audio signal, fed from the headphone output in turn plugged in to your hi-fi, means you can hear your music loud and clear and also play bass along to songs too!

I think that it's fair to say that Laney has put a huge amount of thought into delivering a system that is feature rich but at the same time, it has attempted to make things as easy to understand as possible. There are no difficult menu systems to navigate on the front panel and the controls are adjustable without any horrible noises appearing unexpectedly. You can however treat this unit as a full on studio style processor and use it for complex mixing and recording techniques too. All that and the next day you can take it on stage with you. That's some package!

With the lightweight Nexus SL comes a range of new tuned cabinets to complement. We have a 2x10 and 1x15 cabinet stacked in the video and there is also a 4x10 version - all models feature a 1” compression driver for top end sparkle. Round the back of the cabinets are a pair of Speakon combo connectors and tweeter attenuation switches.

All of the SL cabinets are covered in a 'tuff-stuff' product - a painted on, hard-wearing coating that won’t tear like tolex and won't go fuzzy like carpet covering. I like this covering and am used to seeing it on high end PA gear. I also really like the two top handles on the short edges of the review cabinets. I found that this was a super comfortable way to lift them along with no grazed fingers! Incidentally the 4x10 version has side handles instead. At around 19Kg for each box we have, this was quite acceptable for a neodymium speaker loaded cabinet - the shells sounded rigid with no signs of ringing or vibration. In performance, the cabinets can be stacked vertically or horizontally and model dimensions have been considered so that stacking can be as easy and as neat as possible.

I think the choice of front grill and blue piping is a nice touch that really sets off the product range with just the right amount of (dare I use the word) 'bling' without looking at all cheap.

Together the whole system imparts a great sound through Lavoce branded speakers, which is a premium choice.

To round up, I think this is a super little rig with a big voice. The whole system felt very immediate and 'perky' with a nice punch to the lows. I'd like to hear multiples of the cabinets we had in to see what a difference that makes. All in all, it just goes to show that with a bit of thought a modular system can be put together to match your every need.

For flexibility this rig scores highly. In fact it's really unique in being able to perform so many roles. Even better, it certainly doesn't let you down tonally. It's great to see this innovative British amp maker applying some real thought to what modern bass players need. The icing on the cake is the pricing, which is why this pairing gets our coveted extra half a star!