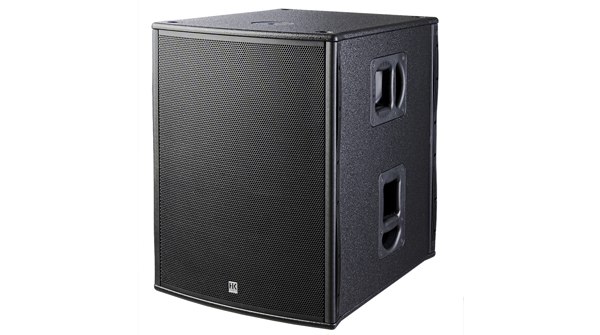 Over the course of the past twenty years HK Audio has become recognised as a high quality manufacturer of live sound reinforcement systems. Made in Germany, its systems are built to a high standard yet remain affordable to a broad range of customers. In the company's promotional literature it says it aspires to deliver perfect sound and claims that its products are a result of a lifelong passion and pursuit of this vision. We decided to put that to the test by taking a look at one of its flagship portable systems, the Pulsar range, to see if this vision is materialising.

First let’s look at the spec. The Pulsar range is made up of three different sizes of MID/ HIGH, or “top” boxes: the PL110, 112 and 115. Each speaker is self-powered, two-way and combines a woofer with a 1” tweeter. The number in the name of the model refers to the size of the woofer. Either 10, 12 or 15”. Here we are looking more closely at the PL112 FA combined with the PL118 self-powered sub. The tops are intended to be used in full range but are improved massively with the addition of the PL118 18” sub woofer, as might be expected.

The PL112FA has a Max SPL of 125 dB half space with a total power rating of 1,000 Watts. The frequency response is set between 70 – 16kHz +/-3 dB so you can see from the spec the addition of a sub is essential for full range playback music. A listening test confirmed that. I wouldn’t want to use the 112FA without a sub if I was working with a DJ or band.

The built in power amp is controlled by sophisticated DSP which offers a lot of protection for your system. There's a subsonic filter that should work your woofers more efficiently, a peak limiter, RMS limiter and Auto standby. During tests at high levels I was able to hear the protection kicking in which is reassuring as it ensures longevity of the system, however it may be set a little too cautiously. It sounds like moderate compression in the mid to high end so isn’t particularly noticeable or displeasing to the ear until you really push it to its limit.

The box comes fitted with two EQ switches, “stand alone or monitor config and EQ flat or EQ contour” (The contour is basically a mid range dip). These functions are fairly self-explanatory and useful. It’s great that the cabinet can be used as a floor monitor when set to that mode. The contour EQ is useful when setting up the system in a reflective room. The sub has a toggle switch that tells the sub what type of configuration it is in, e.g. is it in a stack or not? Again this optional function that assists in the tuning of the system is really useful and can help novices understand what is going on acoustically with the rig.

The amplifier itself has a simple built-in mixer that allows for multiple inputs. There are two XLR/jack combo inputs, one of which is switchable between line and mic level, and a stereo phono input, each with their own level control. So in theory you could use the system without a mixer if you only needed a couple of inputs. The multiple inputs make it ideal for “one person and a guitar” scenarios or perhaps simple “vocal to backing track” performances.

The XLR inputs have “thru” outputs so you can easily daisy chain multiple speakers together with XLR cable from the same sound source or alternatively you can use the “Mix output” which gives you the mixed signal when using multiple inputs.

I have to say, the build quality is rather good. As you would expect there are integrated handles and the cabinet features a duo tilt pole mount allowing for two different angles. The box is made from a hybrid MDF and is finished in attractive black acrylic enamel. There are tough plastic runners around the edges of the box to protect the finish and act as runners when the speaker is used as a floor wedge. The grill is 1mm metal backed with acoustic foam. The pattern of the box is 90 degrees by 55 and listening around the box I have to admit that sound coming off the rear is minimal. We like that!

The system sounds good and well balanced straight out of the box. At moderate volumes I would describe the sound as open in the high end and smooth in the mids. The lows are suitably rounded and boosted by the subs and I wouldn’t want to use the system as a left/right PA for anything other than a speech PA without the subs. When I pushed the system harder I found that the highs lost some detail and became a little ragged which isn’t that unusual. Some pumping from the protection circuit was noticeable but the mids seemed to hold up well. The lows and subs responded well.

I feel that in the Pulsar range we have a very versatile and useful system for a broad range of applications that can be specified up or down in size to suit the venues you are planning to use it in. It is a musical sounding system that clearly a lot of care and attention has gone into.  I like this system. It is neat and tidy, well built and functional. There are plenty of systems out there that fulfil the brief that this system sets out to fulfil but not all offer the value for money that this system offers.

HK Audio engineered this line of speaker cabinets specifically for musicians and DJs who want state-of-the-art acoustics and electronics packaged in a classic, portable format. With the abundance of simple yet useful features built into this powerful rugged system I feel that in the Pulsar range it has certainly achieved this aim.

For unknown reasons, the Pulsar range isn't offered for sale in the USA (probably due to pricing issues - Ed) so our apologies to American readers who would like to try one but can't.