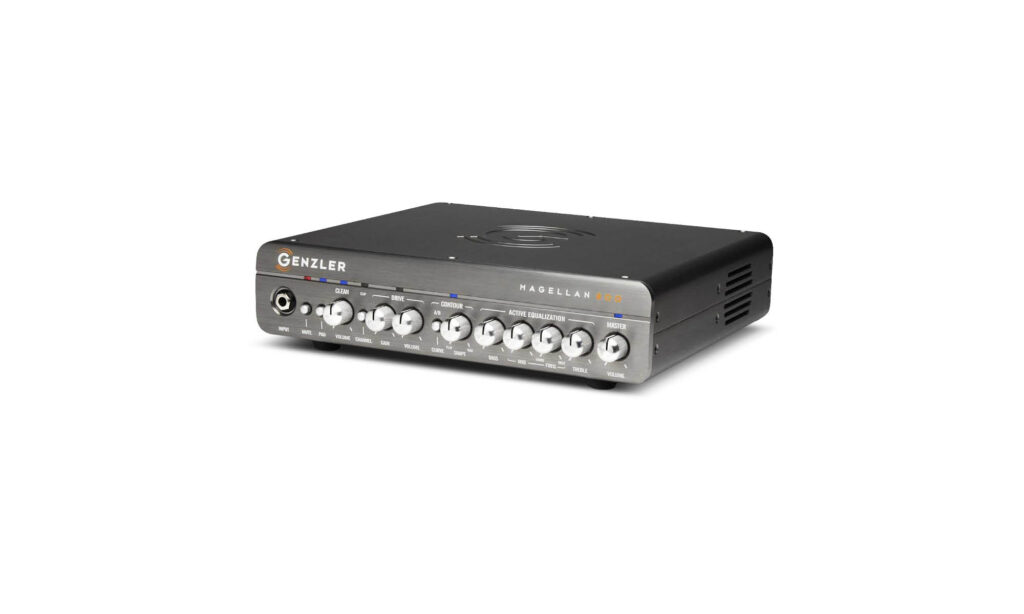 Three bands of active equalisation round up tonal adjustments and with 15dB of boost and cut available you’ll not be left wanting (especially given the volume available from this bad boy). The lows and treble EQ centres are shelving so you’ll have everything boosted or cut below 75Hz and for the top end, everything above 6Khz respectively.

Genzler has a huge amount of experience in amplification, and this shows in the ability, fit and finish of the Magellan amplifier

A reasonable price for such a capable machine.

There is a range of matching cabinets.

I wished for a little more from the drive section but not a deal breaker.

Billed as the pinnacle in the next generation in lightweight, high-output, versatile, bass amplification, Genzler has explicitly set out to raise the bar with the Magellan 800. Dan Veall gives us the rundown.

Another treat for us and one I’ve looked forward to over the last year or so; Jeff Genzler who you most certainly couldn’t call a stranger to professional amplification (also know for being the mastermind behind Genz Benz amplification) is back again with the Magellan 800 under the Genzler brand name. It certainly has been garnering attention and fans since its’ release in December 2015. Still, while it was winding its way here, it picked up the ‘best amp at NAMM 2016’ award.

If I had to use a few words to attempt to describe the ‘out of the box’ sound of the Magellan, I would say ‘crystal clear’, ‘having depth’ and loud.. oh, loud! I paired the Magellan with my Bergantino HD112 cabinets as you’ll see in the video and we were all very impressed with the delivery from this amplifier. Indeed, my incredibly talented camera team stood slightly surprised as I kept winding the volume dial up and up with no signs of the amp giving in.

The amplifier’s ‘out of the box’ tone reminds me a little of the EBS Reidmar 750 in the top end. The obvious clarity is superb and cuts through, but the low end really caught my attention. There’s a lot of boost available via the contour or bass control, but if you don’t overdo it, you won’t need to; there’s a really nice extension in the lows that aren’t ‘flabby’.

The overall appearance of the Magellan is rather posh actually! No signs of looking cheap here, it’s a very tidy front panel with a quality brushed aluminium outer jacket.

The controls are all self-explanatory for those familiar with bass amplification in general, but let's run through them with my thoughts:

Great to have a mute switch right where you need it, next to the input jack and to the right of that the not-unusual pad or attenuator button should you be throwing hefty signal levels in to the front of this amplifier (though as you’ll see in my video I didn’t need the pad engaged on my own instrument despite its high output level electronics.)

The volume knob marked ‘clean’ is indeed just that. In conjunction with the master volume you can set up a wonderfully clear tone all the way up the dial, and it just keeps delivering. How I would have loved to have doubled the speaker count and had the opportunity to really rattle the rafters!

Magellan isn’t just about the cleans though; we’re also treated to a drive section that can be engaged either by front panel button (with indication LEDs) or by an optional foot switch.

For my tastes, this particular drive I feel worked better just on the edge of break up. Maybe the ‘full on settings’ were a bit too ‘in your face’ or a tad unrefined. Certainly much better than some other offerings as it is useable even for adding a little warmth to your tone. I have to be reasonable though. This amp is incredibly clean sounding. I wouldn’t expect a Roland JC120 to deal up Bogner Ecstacy levels of controlled filth! 🙂

Let's dash on; the next knob more than makes up for any reticence over the maxed out drive settings. ‘Contour’ has two modes that progress from a fully counter clockwise ‘bypass’ setting to a manipulated frequency response as the knob is advanced. Setting A, indicated by a blue LED. will scoop out the midrange frequencies from your sound whilst boosting lows and highs as you sweep the dial around. Pushing the button and the LED turns amber, the Magellan takes on a new character. Curve B offers up a rounding off of the high middle frequencies and top end but bumps up the low mids, like the sound of vintage bass cabinets. I also noted that in the spec’, the very lowest frequencies are attenuated too, which could in someways give you a ‘sealed cabinet’ type sound. A very clever feature; there’s only one other amplifier I can think of which has a programmable EQ section that would give you such fast access to two very different amplifier characters.

Three bands of active equalisation round up tonal adjustments and with 15dB of boost and cut available you’ll not be left wanting (especially given the volume available from this bad boy). The lows and treble EQ centres are shelving so you’ll have everything boosted or cut below 75Hz and for the top end, everything above 6Khz respectively. The mids are of a semi-parametric type where the centre frequency is selectable from 150Hz up to 3Khz. So no excuses for not being able to home in on those ‘sweet spots.’

The master volume is mentioned on the far right-hand side with a power indicator situated above.

You’d be forgiven if you were happy leaving it there as the sound of this amplifier speaks for itself, but round the back is a whole host of connectivity that will ensure this amplifier will fit neatly in to every setting, on stage, in the studio, even, dare I say is (given the 800W available from the speaker outputs) a practice amplifier one using headphones instead.

Magellan is ready to travel the world with an auto-sensing power supply, so no need to check switches and internal fuses, it’s prepared to tour! Not only that, but this lightweight machine is able to deliver its output in to a number of speaker configurations. Magellan has two Speakon output sockets and a minimum impedance rating of 2.67 Ohms. Yes, that’s running three 8 ohm cabinets together as just one example! A slider switch on the back helps to configure the amplifier’s thermal management when the load on the amplifier is expected to be down to this impedance.

There’s an auxiliary input for a drum machine, or MP3 player which coupled with the headphone socket will allow you quiet practice along with your favourite beats or music. Magellan has an effects loops for adding ‘line level’ outboard devices but also serves as a patch point for taking the signal from the preamplifier output or sending a signal into Magellan’s power amplifier. Check the manual for more information there.

Finally, topping off the rear panel, the afore mentioned foot switch socket, a tuner / dry output socket and an XLR connector for sending a D.I. (Direct Injection) signal out to another device such as house P.A or a recording console.

Weighing just under 3Kg and having an optionally padded carry bag available, this is a powerful amplifier that is going to be so easy to just throw over the shoulder and be part of your ‘single journey from the car’ routine when it comes to gig time.

I’m very impressed with the Genzler Magellan 800. It really does feel like there’s weight in its sound when coupled with my ceramic speakers. I don’t mind admitting that there are some amplifiers I just like to (carefully) put back in the box after review; this one I wanted to get in the band room to see how it performed. Sadly, I can’t take this one home. 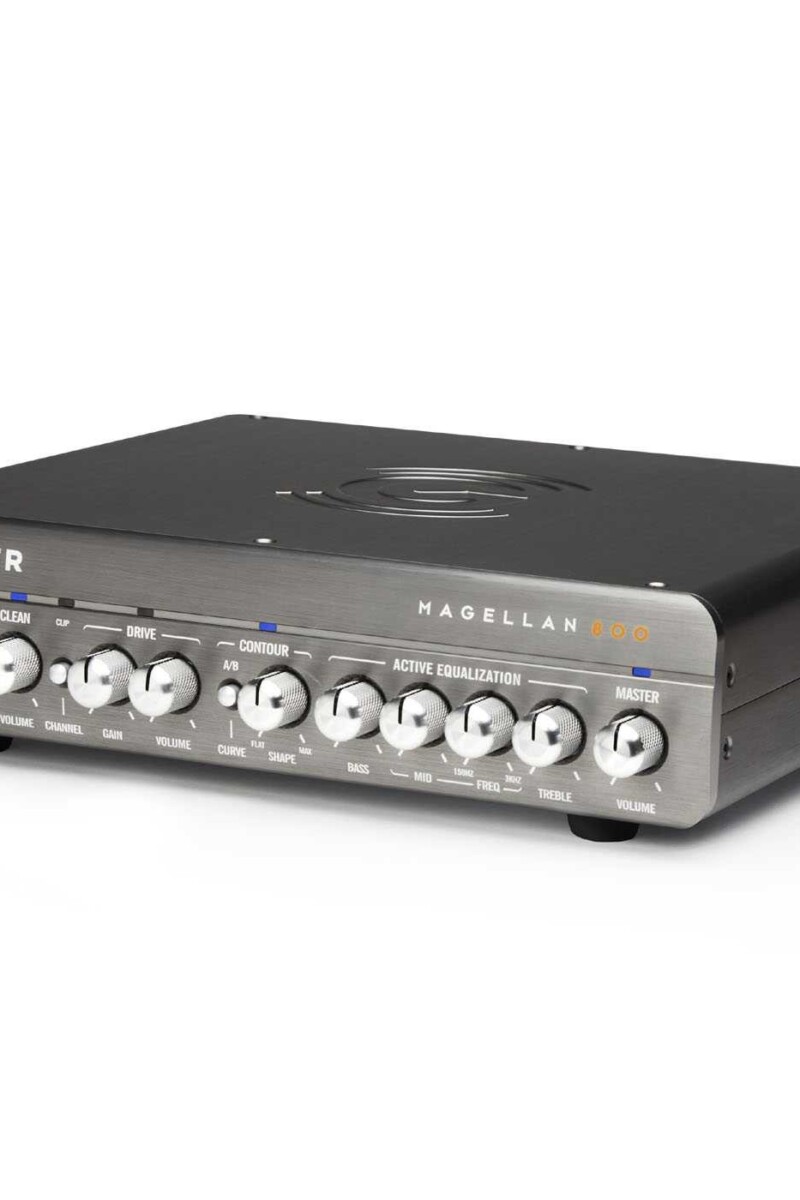 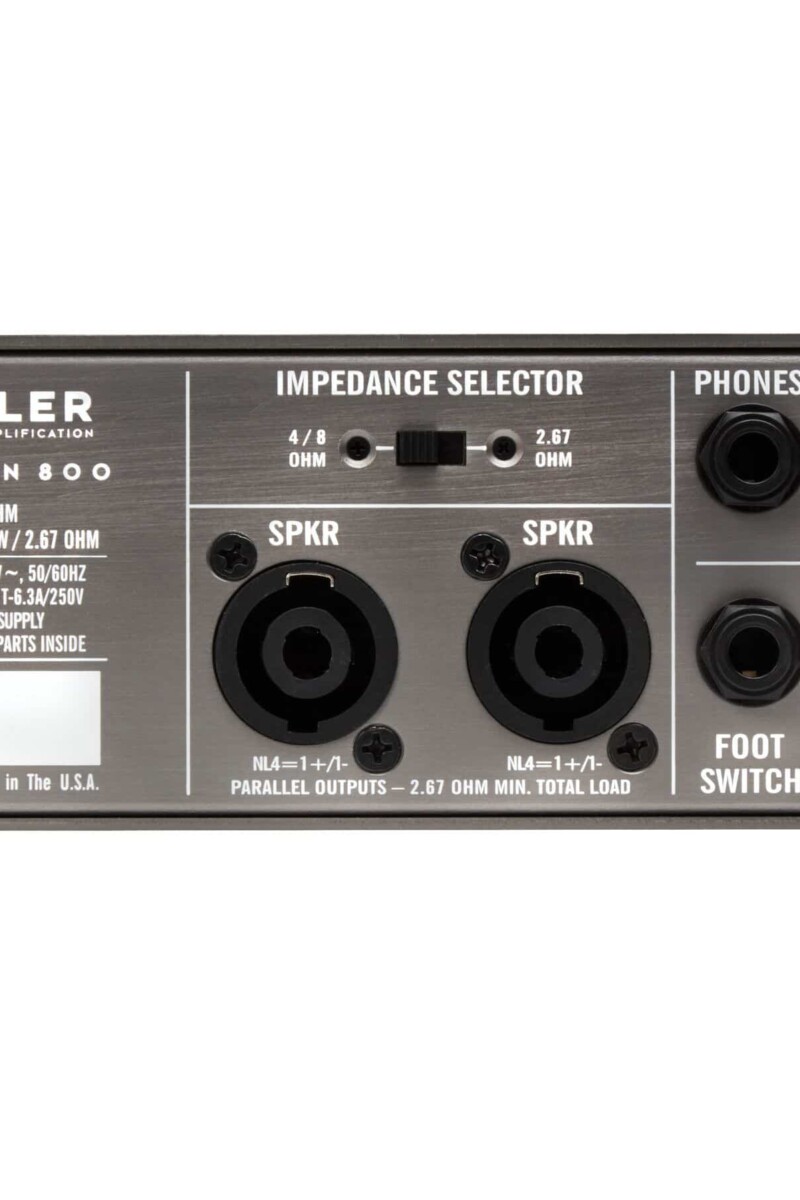