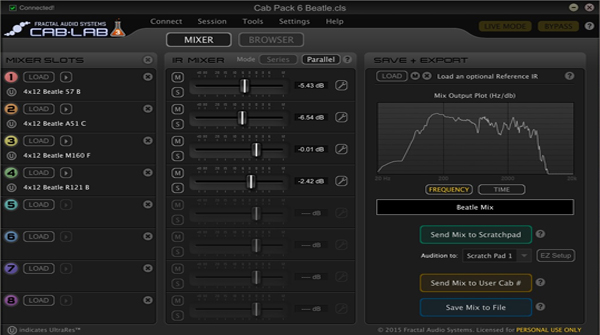 Fractal Audio has become one of the biggest players on the amp modelling and effects market scene since the release of the original Axe FX standard way back in 2006. Even in the early days, the company boasted an impressive range of artist endorsers and now it seems that the Axe FX II is the unit behind a huge array of tones from our favourite guitar players.

The company has always produced companion software in the background, such as Axe Edit and Fractal Bot, that allowed users to easily edit tones and upload/download firmware or presets to their unit and in fact many owners never use the front panel on their Axe FX units, preferring the user friendly and attractive graphical interfaces offered by these software alternatives. However, Fractal also produces software that is not exclusive to the Axe FX range (although also very relevant to it), the most interesting of these being CabLab, now in its third iteration.

CabLab 3 is an ‘IR’ mixer, ‘IR’ standing for Impulse Response, a form of simulation that can model a real speaker plus cabinet and microphone/pre-amp combination in software form. Impulse Response technology has been around for a long time now and represents the most accurate method for capturing and modelling the sound of speakers, this being the technology used in the Axe FX for exceptionally realistic results. Up to eight ‘IRs can be loaded into the mixer at once with the usual volume, mute and solo buttons that you’d expect in this kind of package for tailoring the balance of your combinations. But CabLab 3 goes well beyond that with controls for phase, low and high pass filters and trimming of the IR length. IRs can be mixed in series or parallel and the interface includes a frequency or time readout for those needing the most detailed information about their mix. This level of control allows incredibly in-depth tweaking for demanding users, but the basic interface is very simple to use with drag and drop compatibility allowing you to simply drag your IR files into the mixer and adjust the balance of each to taste or mess with the phase and filters for more precise mixing techniques.

CabLab is available in both a plug-in and standalone format with full compatibility with 32-bit and 64-bit VST and AU support for Windows and OSX digital audio workstations. The beauty of the plug-in version is that it offers the full power of the Axe FX II’s cab modelling section in your DAW but with up to eight IRs at a time, allowing you to drastically alter or improve your amp modelling plug-ins or record your amp directly to your soundcard and use CabLab to simulate your speaker.

Within the plug-in you can save sessions and even export IR mixes to a file or send them direct to your Axe FX for immediate auditioning. There are flexible options for where to export the mix on your Axe FX, either in its scratchpad location or to a specific user Cab slot for permanent use. Of course, an Axe FX is not required and you can save mixes and send them to other users for their sessions or download them from other users on Fractal’s AxeChange website for use in your own projects. The standalone version uses your existing audio interface, including the Axe FX II if that’s what you use, to allow users to audition their mixes in real time. It also has the massive benefit of including a full suite of tools allowing users to record their own Impulse Responses with full instructions on the processes involved in both microphone capture and using a DI box for flat response results.

For those without the technical expertise or equipment required to capture their own Impulse Responses, Fractal has produced a huge array of ‘Cab Packs’ that include a vast array of professionally captured IRs of all the classic and most desired cabinets, mics and pre-amps in every position imaginable. Each Cab Pack includes a full suite of CabLab compatible files that can be mixed in an unlimited number of combinations for use in your DAW or on an Axe FX II.

In tests on my own tones the Cab Packs undoubtedly contain some of the best IRs on the market and combine beautifully in CabLab for some stunning results. IR libraries can become unwieldy with hundreds of files in most of the Cab Packs, but CabLab includes a browser function that can alphabetise and sort your collection by speaker size with a useful search function for quickly finding what you need. CabLab is also fully compatible with any of the third party IR packs on the market of which there are many fantastic options available to suit all tonal needs.

The plug-in and standalone version sell separately but can be purchased as a bundle for a discount price. Both versions must be authorised using the iLok software licenser which can be a pain to use at times, but once authorised it runs perfectly and gives users an impressive amount of power, especially when combined with Fractal’s amazing Cab Pack library.

With an easy to use interface and extensive feature set, CabLab is undoubtedly the best IR mixer on the market right now and the integration with both DAWs and the AXE FX II makes it an essential purchase for those who use IRs in their recording or live sound shaping processes.