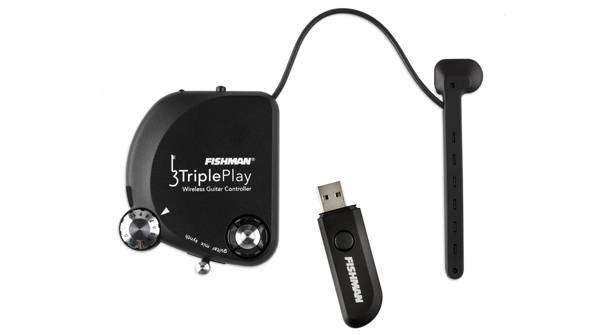 The world of MIDI guitar has always been a slightly disappointing one with very few, if any, products actually giving the guitarist a viable and glitch free solution for controlling synths and opening up the tonal and sound worlds available to keyboard players. A number of big name players have brought products to the market that have worked to a certain degree, but have struggled when it comes to tracking with external synths or computer based virtual instruments. Now Fishman has entered the market with its Triple Play pickup system and it breaks new MIDI guitar ground in more than a few ways.

The first innovation that Fishman brings to the table is that the Triple Play is a wireless system, comprising a transmitter/pickup section and a USB receiver dongle. Plugged into your computer the receiver requires no driver installation and is automatically recognized as a MIDI input device on Windows, Mac and iOS products. As with other pickup based systems on the market, the transmitter and pickup must be attached to your guitar and Fishman offers a wealth of options for the majority of common guitar shapes, allowing for permanent or temporary fixings as required. The good news is that it means you don't have to have your guitar carved-up to fit one of these!

The pickup is connected via a short 6” cable to the transmitter and is a hex-type design, offering a separate pickup for each string. The build quality is good, although I’d have liked to have seen metal at this price rather than the plastic that Fishman has opted for, as I’m not sure the transmitter would survive a drop if your strap failed during a gig. Another slight issue in terms of design is the size of the USB receiver, as it blocks off the other USB port on a MacBook Pro once inserted. If you use a USB based soundcard this will cause an issue and require a USB extension cable to free up the extra USB port.

Once plugged in and connected, I loaded up Logic Pro and picked a synth sound from Logic’s built in selection of sounds. The Triple Play was recognized immediately as a MIDI input device and no setup was required. The tracking of the Triple Play is far and away superior to any other pickup based solution I have tried, with very few glitches or ghost notes. Tracking on the low E string, usually a big problem for MIDI pickups, is superb with solid note detection and dynamic response and note detection is lightning fast across the whole range of the guitar. With modern in built audio hardware or external soundcards the latency can be dropped to below 4ms, which is around the same as standing across the stage from your cab and pretty much undetectable by most users.

Hammer-ons and pull-offs are recognised well, although pure legato players may be disappointed as fast legato runs seem to be a struggle for the unit, even if they are played very cleanly. This is a little surprising as a software MIDI convertor exists that does a great job of converting legato playing, however, it doesn’t have all of the advantages of individual string detection and the super low latency that the Triple Play offers. Pitch bends are also accurately detected, offering nice vibrato and standard bend effects without having to use external controllers.

The Triple Play also offers a large software suite that is aimed at users who are starting out on their recording journey. The software comprises IK Multimedia’s Sampletank 2, Native Instruments Kontakt Elements 2, including Kontakt 5, Reaktor 5 and Guitar Rig 5, Progression notation software, Studio One Artist edition and the Triple Play interface software. The suite is great news for anyone who is lacking existing synths and DAW software, although everything must be downloaded from Fishman’s website and adds up to pretty hefty download, causing problems for users with limited Internet access or slow connections. Each software package must be installed and authorised separately too, which is both annoying and time consuming but once installed and authorised the package offers a fully featured suite of synths, samples and recording software suitable for professional level work.

Kontakt is an industry standard sampler with some great sounds built in and whilst Sampletank is a bit long in the tooth now, with an awkward interface, it too has some great sounds built in that are much more useable than the average sounds included with other MIDI guitar systems. Progression is a nice addition, offering a well-featured notation program but, even with very clean playing, I could only get it to transcribe pretty basic playing with rhythmic errors and strange glitches occurring with more complex ideas. It works superbly with mouse-based input and for simpler lines and will be a nice feature for teachers wanting to produce scores or charts for their students.

The Triple Play software interface allows the user to load any of the factory presets created by Fishman with the included software or to create sounds of their own using up to four virtual instruments that can be mapped to individual strings and frets using the split function. Sounds can be organised into songs allowing the user to create a setlist of patches for live use, however, due to the size of some of the samples involved, patch changes can take up to a couple of seconds, making immediate patch changes impossible on stage. Creating splits is very easy using the colour co-ordinated drag boxes, simply drag the correct colour over the required strings and frets and the software maps the sound to that area.

On initial installation the software scans for all of the user’s virtual instruments allowing you to use your existing synths as well as the ones supplied by Fishman, with no performance problems when using third party synths. A small mixer allows for basic panning and level control of each synth and offers a guitar channel where the standard guitar output can be routed through Guitar Rig or any of the users existing VST effects. It’s worth noting that the guitar signal is not passed through the Triple Play but rather must be sent separately to a sound card and then re-routed to the mixer software. The software also offers individual string sensitivity control and a built in tuner that offers very accurate pitch detection.

Overall, the Fishman Triple Play is an impressive unit that offers the best tracking experience of any MIDI pickup on the market. The software package is well featured and generally works well with some above average sounds on board. The killer feature is definitely the ability to use your existing favourite synths with virtually no latency but be aware that, as with all pitch to MIDI convertors, the Triple Play works best with clean technique and will punish poor or sloppy playing. It’s an expensive accessory for your guitar but is the closest any company has come to realizing the guitarist’s MIDI aspirations.