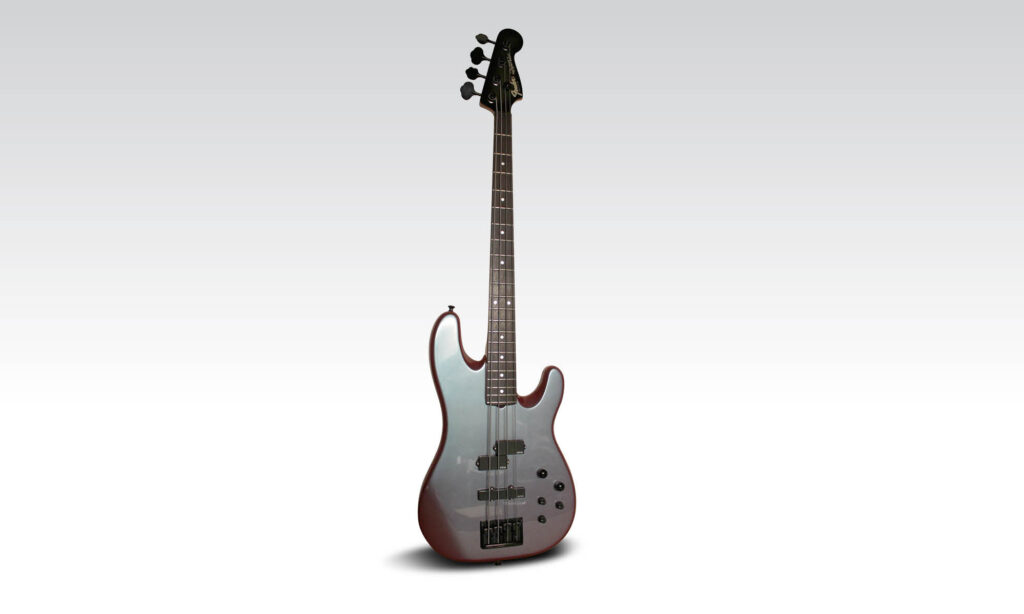 This bass is a very special instrument with a long story that means a great deal to me. I’d like to share it with you but I will go for the abridged version!

The best of both worlds, Precision meets Jazz bass

Styled in the 80’s, these basses seemed to go out of fashion, but the prices are creeping up now!

It’s a Guitar Interactive first! Dan Veall reviews his very own bass! You will have seen this bass cropping up in many of Dan's reviews over the years right from when he first joined the GI team. We’ve lost count of the times he's been asked about it, so we thought we would bring you something a little different in the basement this issue and get a closer look at this 30-year-old instrument.

I don’t mind admitting that it feels a bit strange reviewing my own instrument. I’ve never really found it that easy talking about myself though I have no problems at all talking about other people’s (manufacturers) bass guitars and equipment live to a camera! Hopefully, the review video doesn’t sound too awkward!

This bass is a very special instrument with a long story that means a great deal to me. I’d like to share it with you but I will go for the abridged version!

I will, however, need to take you back to my teens! I used to head out to town and collect whatever Guitar or Bass magazine that was on the shelf when I got there - usually it was a US edition. ‘Bass Player’ I believe! I was an impressionable young teen and I would pour over page after page of bass reviews and interviews sponging up every last detail. I could probably recite most of the specifications for that particular month’s reviews! What a twist of fate that I now find myself in the reviewing chair!

At the time, pretty much all of my favourite bassists had a Fender in some way or another, so it was natural that I wanted the same, but I did want something a little off the beaten track even at that age. Enter page 33 of the September or maybe November 1989 issue of ‘Guitar World’ - A Fender advert showing off the latest BXR range of bass amplification - and tacked on the end of the blurb an introduction to the Fender Power Jazz Bass Special pictured in Candy Apple Red, on a stand next to the speaker cabinets. Interestingly my very first bass was actually a clone of one of these models.

Somewhat strangely, it took me some 18 years to finally get a Power Jazz. picked mine up off an eBay seller for next to no money. I think at the time they weren’t that ‘cool’. When I received it, by coincidence, like the magazine advert I believe it is also dated 1989! Fate or what?

In the last few years, well, I have another Power Jazz, which I believe is a 1987 model and it is every bit as good as this example. Prices are rising though, so I didn’t manage to snag such a deal as the first time.

In detail, The bass itself has an Alder body and features a Rosewood Tri-Lam Maple Neck. A really dark example of Rosewood at that too. The neck itself I would describe as absolutely effortless to navigate. It is one of my favourite profiles. I remember reading somewhere that the carve is based on a ’62 Jazz, but I can't substantiate that claim. It is very skinny around the nut though!

In it’s “stock” form, this bass is a souped-up ‘Jazz Bass Special’ - Also a late 80’s Japanese Fender model. The ‘JBS’ I shall call for short is essentially a Jazz neck on a precision body with passive PJ pickups, a three-way selector switch and a passive tone control. No pickguard. Duff McKagan is a notable Jazz Bass Special player. His original models were late 80’s JBS models that had a more P bass neck. This is something that has been copied over to the Mexican signature model currently available.

The ‘Power’ part of the name adds features to the already splendid instrument. Firstly, the fretboard extends over the Maple neck to include another couple of frets. Those all-important high E & F notes! The body horns are scooped out for a more sporty look but to gain extra access to the higher frets too. One of the most intriguing but in some ways interesting features was that all ‘power’ models have a reversed P pickup, with the treble side closer to the fretboard. This seems to make sense to me. I guess we’re just used to it being the other way round. Speaking of electronics, well PJBS got the turbo treatment under the bonnet too in the form of an active preamplifier powered by a 9v battery. It is in two sections, firstly the TBX tone control (that offers the option of ‘boosting treble content’ as well as the more usual passive action of cutting top end which I believe was carried over from the electric guitar counterparts. PJBS also utilises a filter style equaliser. Essentially what I believe to be a notch filter. As you sweep the control around from 0 to maximum, you could cut away your low end or move a scoop through the midrange frequencies then all the way to the far extent of its travel, rounding off the top end instead. I liked this system as it didn’t seem to change the overall instrument level much, save for the settings that cut away too much of the guitar’s main character in those important low mid frequencies. A toggle switch then allowed adjustment to the width of the filter for a more or less defined change in sound.

A capable system but I think the pickups in my instrument were a little on the weak side. After owning the bass for several years, I felt it was time to give it some TLC. It has played literally everywhere! Pubs, Schools, Concerts.. even in Prison; on the right side of the law I should add!

I qualified in electronics many years ago, so I have no problem with getting into the control compartment: The original electronics were carefully lifted out and I have those stowed away carefully.  My bass, now heavily modified has an EMG Pickups Active PJ set dropped in which works so well with this bass and that is tied to an active 3 band EQ. Lots of output and a wonderfully clean pristine sound with a big bloom in the low end should it be needed.

Also part of the instrument’s makeover (not surprising for me if you have seen my other basses, is a Chameleon Flip-Paint finish that changes colour from Pink to Blue. I chose this scheme as a nod to a couple of my favourite bassists. Billy Sheehan’s ‘Rose Blue’ Yamaha BB3000S and Guy Pratt’s Jazz Bass ‘Betsy’ in Burgundy Mist. A good friend of mine carried out the refinish and at the same time, we resized the original holes in the bass to fit the new electronics.

Like any review, I will score this instrument out of the usual /5. Of course this is my personal feelings about a bass I love dearly, so naturally, this is my 5/5. That said, if you find one of the sought after Fender Japan basses, I would strongly advise that you have a chance to play to see how good a nice example can be. Very impressive. Super comfortable. Even this bass, that probably requires having the worn frets worked on still shows signs of an incredible level of workmanship. Not a lifted or sharp edge on the original fretwork. 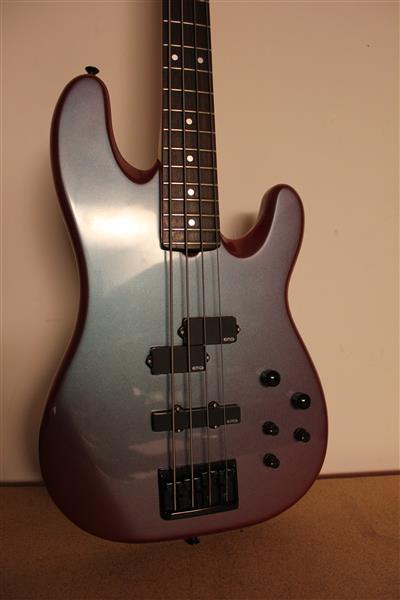 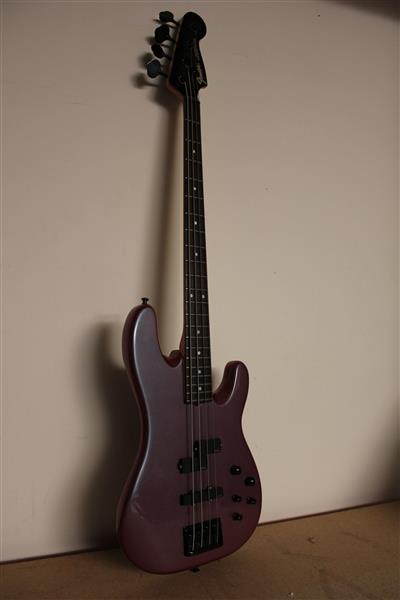 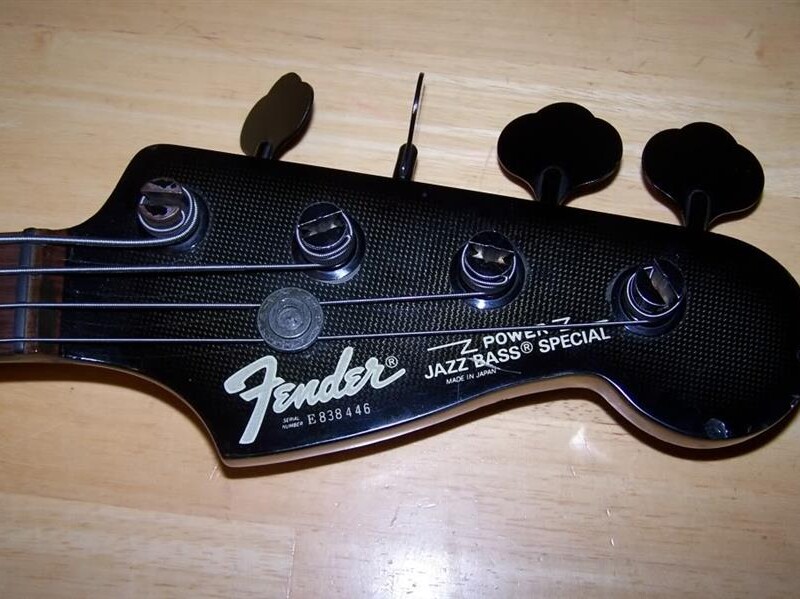 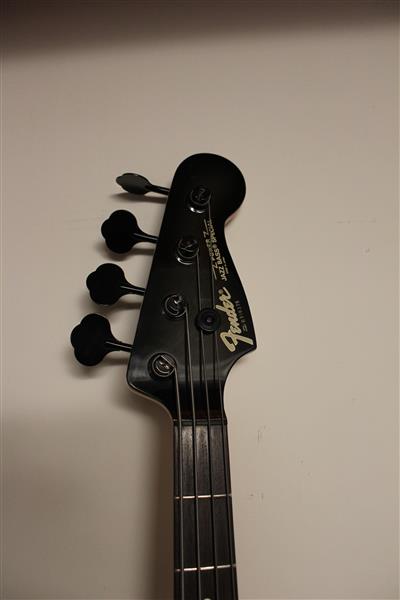