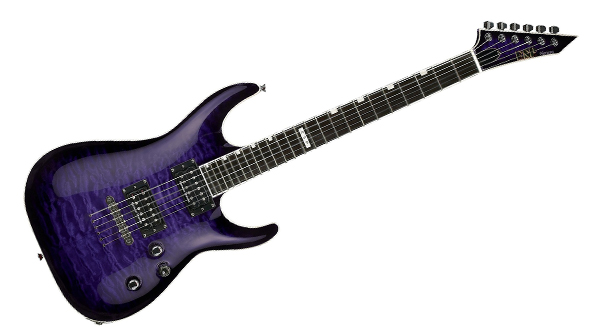 Looking for the ultimate metalhead fixed bridge guitar? Rick Graham has found it. But what if we told you that ESP's stunning Horizon NTII had a few other tricks up its sleeve as well?

ESP's Horizon range was first introduced by the company back in 1986 and has undergone various changes, reviews and additions over the years, although the core design has stood the test of time. As it stands, the latest Horizon model, the NTII, is the quintessential superstrat with the metalhead in mind. Well, that's what we were expecting and, in a sense, that's what we got. But - and it's a big but - don't be fooled into thinking that it is all that this exceptional guitar can do! Built with the kind of quality and attention to detail that we've come to expect from ESP, the Horizon is no one trick pony.

Let's take a closer look under the bonnet of this charged-up metal monster.

The Horizon NTII, which incidentally stands for Non-Trem, is certainly a very impressive looking instrument. With a top made of high grade flame maple, coupled with a stunning finish, which incidentally, in the case of our review model, is called Reindeer Blue (they have blue reindeer? Who knew? - Ed), this instrument presents an ultra aesthetic package that the majority of metalheads would be divebombing over one another to get their hands on.

Slightly unusually, the Horizon features a thru-neck design, which means that the main body consists of mahogany 'wings' either side of a piece of maple which makes up the neck. Turning the guitar over, you can actually see the tell-tale maple stripe and mahogany wings through the finish.

That maple neck with its thin U-shaped contour, bears a lovely ebony fretboard and 24 XJ frets. Offset block inlaid fretboard markers grace the fine ebony board as do the initials ESP at the 12th fret. There is some serious work in this guitar and it shows.

The Horizon features the distinctive ESP headstock loaded with Gotoh Magnum locking tuners. The pickups comprise a Seymour Duncan SH-4 in the bridge position and a Seymour Duncan SH-1 in the neck position. It also features a push/pull coil tap for those who want access to those unmistakable single coil tones.

Controlling the two Duncans are a master volume and master tone control with a three-way pickup selector toggle switch, the volume control giving access to those single coil tones via a push/pull. Finished off in black nickel, there's simply no escaping the conclusion that this is a very purposeful, fine-looking guitar that states its purpose on earth absolutely to perfection. One look tells you what the ESP is for - and then you get to pick it up and play it!

I always like to begin road testing electric guitars by playing them unplugged for a while before hooking them up. The Horizon NTII struck me as being remarkably loud when unamplified, with a remarkably resonant tone. Plugged in and things got even better. I was immediately struck with how thick the tone was whilst still retaining a ton of clarity. The clean sounds were superb and I was particularly impressed with the SH-1 neck pickup for its warm, vintage style tone which also sounded superb with the coil split function. With some gain dialled in, the Horizon was unstoppable, providing beautifully creamy lead tones with the SH-1 and lots of aggression and bite, perfectly articulated whether playing lead or rhythm when using the SH-4 bridge pickup. The sustain was particularly impressive thanks, no doubt, to the neck-thru construction. Playability was superb with great intonation throughout.