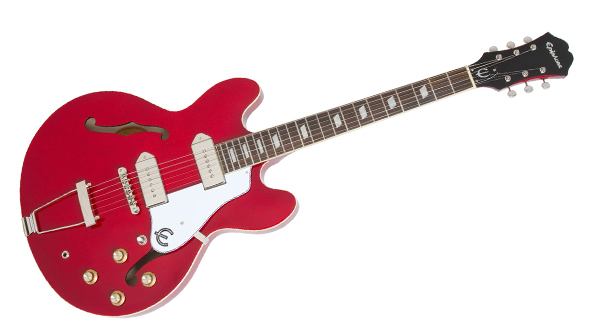 Epiphone is one of America's oldest instrument brands, technically having been around since 1873, but in practice having made a name for itself in the USA in the early years of the 20th Century. Epiphone has made instruments for every style of popular music but its golden era was when it was king of the Jazz guitar back before WWII. I think it’s fair to say that they are now known as the cheaper version of Gibson guitars, having been acquired by Brand G back in the late 1950s. For a while Epiphones were made side by side with Gibsons in Kalamazoo but these days they are made in China and are incredibly cheap compared with their US-produced Gibson equivalents.

In this review we're checking out the Casino semi-automatic electric. It's one of Epiphone's enduring models and was used extensively in the latter part of the Beatles' recording years - listen to the Revolver album or anything after that and you will hear the Casino. Since then it has kept reappearing so certainly deserves that overused word 'classic'. As always, be sure to check out the video to hear and see this guitar for yourself.

To start at the beginning, the Casino is certainly a cool looking guitar. Our sample, which we were kindly loaned by the retailer DV247, was finished in a lovely deep cherry. That finish plus the trapeze tailpiece and two F holes give it that real retro look. Fit and finish throughout was excellent and it will certainly turn heads. The body and top are both made from laminated maple and that coupled with the fact it's arguably not really a semi-acoustic at all, having no centre block (unlike, say, the Gibson 335 which it vaguely resembles) makes it very light in weight. The weight factor is not only good for saving your shoulders and back, it’s also great for resonance and increased sustain. Even unplugged the guitar resonates well, you can feel every note that is played, which is great.

The traditional style headstock is quite a large affair making it slightly top heavy but the tuners were good and stable. The set neck is mahogany with a rosewood fingerboard, 24.75” scale with 22 frets. I found the fretboard and shape of the neck very comfortable to play as was the action and spacing between frets, there were no buzzing or tuning issues anywhere on the guitar, and thanks to the set neck, upper fret access was fairly easy.

The two Alnico P90 pickups are part of the Casino look and sound. I've always thought they were quite good, and the ones on this guitar were no exception, offering warm mellow sounds in the neck position, with bright jangly tones from the bridge.  A three way selector switch makes things nice, simple and obvious when coupled with the standard two volume, two tone control configuration. You really can tailor a variety of sounds from this guitar not just the bell like cleans but also biting crunch, and quacky out of phase.

That said, it's never going to be a full-on Rock guitar, not least because of the feedback problem, exacerbated by the fact that it is completely hollow inside. With modern monitoring, this is less of a problem than it once was but it is still going to be an issue.

If I had any reservations about the Casino it would be that it felt a little flimsy to me. The trapeze tailpiece looks cool and goes with the whole vintage styling, but I'm not sure how sturdy it will be long term.

I've played a fair few Epiphone guitars over the years and have always quite liked them. They don't have the credibility they might once have had, but for the price and in terms of the sound quality and playability (very good on our sample) you really can't argue. This could make the Casino a useful second guitar for a serious user or a good guitar for a player working his way up towards more expensive professional instruments. That said, it isn't as stunningly cheap as some of the Epiphones you see on the market (the bargain basement Les Pauls, for example), so it would be sensible to try one alongside the competition to judge for yourself.