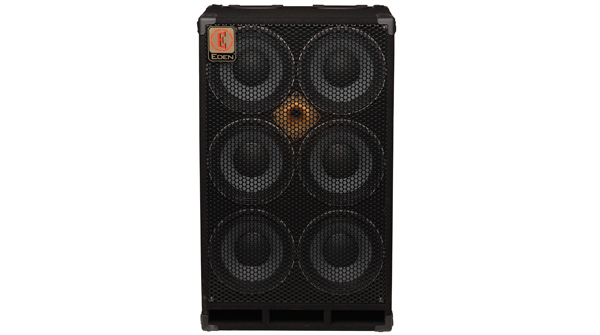 I'd guess that everyone who reads the 'Bassment' will already know that I love all gear from old vintage to new micro-heads. I love the progress we are making in terms of new technologies that can be greatly helpful to us as musicians, especially those of us on the move. I love the lightweight gear we have and I am a sucker for feature rich equipment that fulfils the need of musicians across all genres.

But what I love most as a bass player is shaking the very foundations of a venue with guttural, full, fat bass end. Understandably, there was a big grin on my face as we enjoyed unloading this mega-beast - our second Eden system in a row!

Eden Electronics has been crafting zombie apocalypse proof bass gear since 1976 and certainly prides itself on knowing that its kit is built road ready for years of service. You only have to check out Eden's 'Why Eden' page on their website to see pictures of a World Tour 800 amplifier that survived a building fire and, although looking untidy, passed all electrical tests! Underneath a photo of another head that was run over by a truck and also survived!

Let's take the Eden head in for review first. The World Tour WT550 is a real pro quality head in Eden's famous gold livery. It features a valve driven pre-amplifier, pristine signal path and mono power amplifier in a medium-small amplifier package. It boasts an all-metal frame construction, a clearly laid out front panel and is designed for the stage and studio alike.

Featuring an output of 550 Watts at 4 Ohms, that's more than enough for most of us, however, there's also the option of running the amplifier in to a 2 Ohm load safely, resulting in an output power of 750 Watts. The internal active cooling system and built-in thermal safety circuits keep an eye on things as you push the volume controls up!

The front and rear panels are rich with some great features - clever without going over the top, I feel. The gain control with its fetching blue coloured cap is on the immediate left next to the input jack socket - a standard 1/4" type.  Over on the right hand side of the front panel is the master volume, also with a matching blue cap. I'll turn our attention to the centre of the front first and save my favourite control on the panel for last.

Tone manipulation is looked after by a semi-parametric equaliser. Two stand alone bands control bass and treble but in the middle of these is a brilliant wide-ranging equaliser section. Not only can you boost and cut three more areas of the frequency range, but the semi-parametric EQ system allows you to select the individual frequency centres you wish to treat. The left hand control actually dips right down in to the low 5-string bass region of the spectrum at 30hz and sweeps all the way up to the low-mids region of 300hz. Plenty of scope for finding that sweet spot with 15dB of cut and boost available. The Mid control sweeps from 200Hz, all the way up through to 2Khz with the same amount of cut and boost for upper mid frequencies and treble bite. The same for the Hi EQ control knob, taking our boost and cut across a range of 1.2Khz up to an airy 12Khz region.

I'd be pretty chuffed with just these controls on an amp to be honest. That's a really useful EQ section that should be able to cover most tone sculpting needs. But no, Eden's designers aren't satisfied with just that! They've included a control they name the 'Magic Knob': The 'Enhance' function Eden describes as: a 'complex control that simultaneously boosts the very low bass, upper middle and high frequencies whilst putting a dip in the lower frequencies'. Effectively off when full counter-clockwise, as the knob is advanced clockwise it has the effect of making the bass tone sound progressively 'bigger' whilst removing the nasal 'boxy sound' effect of small cabinets'.

We were very impressed with the big difference that the control had on the WTX264 and EX112 we reviewed in issue 16. It delivered Lots of low-end from a small box. Speaking of EQ - if you start over-cooking things a bit, there's an EQ Clip LED that lets you know when you are starting to distort the equaliser section.

Also part and parcel of this control is the ability to bypass the built in compressor by pulling the knob outward. The compressor could be described as near-invisible as it doesn't really kick in until you seriously start pushing the input gain. It's more of a limiter rather than a full squishy effect that I like using sometimes. It will however keep control of your hard attacking notes without impinging too much on your dynamics. I didn't notice any artefacts or distortion when pushing the compressor either, which is a sign that Eden has chosen a quality circuit for the job.

Finally for the front panel, the illuminated power switch lets you know the amp is on and underneath that is a headphone socket for private practice.

Round the back you'll find a tidy array of inputs and outputs you need rather than lots of 'stuff' you don't. A fused IEC power input socket sits to the left of the speaker 'Speakon' socket and a pair of 1/4" sockets for connection to your speaker cabinets. (Don't forget to use speaker cables and not instrument cables for these connections!) An effects loop for external line level devices is available as well as a Direct Injection (Balanced Line Out) socket. The D.I output has a level control and a 'ground lift' switch, that, to over-simplify, can help with removing hum from the feed to your PA or recording console. So that just leaves us with three sockets, namely a tuner output for connecting your electronic tuning device and above that auxiliary line inputs for connecting a drum machine or music player input to jam along with.

We'll move on to the behemoth D610XST cabinet first and then talk a bit about how the pair sound.

First of all, if you are used to playing small club gigs with a single 10" speaker sized combo - you may want to have your chiropractor's number on hand before taking on this six 10" speaker beast single-handedly! Ironically, it's billed as being ideal for when you really don't need the full heft of an 8x10, but this is still a pretty mighty cabinet! It's not the physically largest 6x10 sized cabinet I have used, but it is certainly a substantial weight, owing to it's ultra strong, tour-ready, void free wood shell, braced to withstand a bomb drop. No Neodymium speakers here either, the cast chassis EC-1060XS bass speaker is a meaty beast, designed to deliver gut punching low-end. There's also a single cast bell tweeter in the top middle of the cabinet in a tasteful gold finish. It adds a sparkle to the top end of the bass signal but should you need more or less, you can adjust its level from a control panel knob on the back providing an off-setting progressively sweeping around to +3db output compared to the 10" speakers. Two Speakon connectors as well as a pair of 1/4" sockets are provided for connection to your amplifier. The cabinet has rear placed wheels built in as well as inset handles to help with manoeuvrability. The 'towel rail' style handles are always helpful when tipping the cabinet back - it's a one man wheel-out to the tour van!

I think that the 1,500W RMS power handling at a 6 Ohm impedance is going to be more than enough for absolutely any amplifier you place on top. The WT550 sounded huge, clean and pristine feeding in to the D610XST with plenty of volume to play with. As if we needed it, the Enhance control had to be abused just a little to see what it could do whilst the amp was plugged in to this big bass cabinet. There's some serious punch and low end to be enjoyed here! I was however also impressed with the clarity of the system too. No woolly tone to be endured here. Top marks for tone, though the cabinet weight may put some off. Look no further than the rest of the D series range from Eden as there are plenty of other modular options to be had instead! If you're looking for a stadium-capable rig and your road crew is up to it, this has to be high up your list.