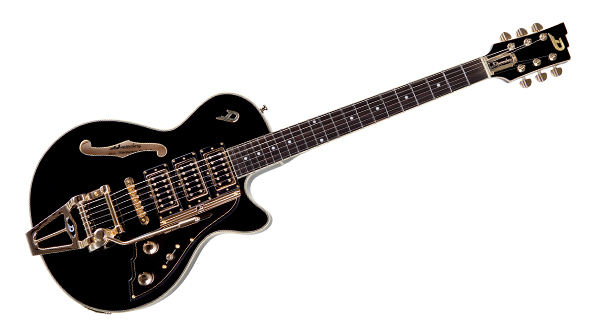 Duesenberg's stunning Art Deco designs almost overshadow the fact that these are highly playable guitars and make a great alternative to the 'obvious choices.' Michael Casswell gets ready to change....

Germany's Duesenberg is rapidly creating a unique place in the market. The Hanover-based company is making superb quality guitars that are very playable, have fabulous tone that is full of character and manages that difficult design trick of combining looks that catch the eye in a cool way, rather than a 'trying too hard' way. Duesenberg isn't the first guitar maker to chase the 'retro' image but it's probably the most successful and it has scored with professional players too, having won a list of big name users that some far longer established rivals must envy.

Back in GI 12, I reviewed a Duesenberg Fullerton and this time round I've been asked to look at a fine-looking Starplayer TV Custom in Black with gold hardware. Black and gold is always a good combo (think Les Paul!) and this guitar certainly gets noticed. It sounds very good too. The combination of the semi-hollow body and the D-Tron humbucking pickups delivers real character when amplified, and a character that isn't either Fender or Gibson-ish: it's something real different but very usable. I suppose would say slightly Gretsch-like, but it's all a matter of opinion and maybe that's suggested by the guitar's looks? Any guitar from any brand will only sound as good the player playing it, but there are certainly some nice tones to be had out of this one.

The Starplayer TV is apparently Duesenberg's best selling model and the Custom version shares the same cool body shape but adds an extra D-Tron humbucker with that black finish and gold hardware. In fine traditional style the Starplayer has a wood sustain block running down the centre with the F holes over the sound chambers either side, much like a 335. The block will aid playability at volume when using more gain and help stop the feedback that semi-hollow bodies can be prone to. The type of wood used for that centre block isn't specified anywhere, but the top is laminated spruce, and the back and sides are maple, all painted deep black then coated in poly lacquer. You also get cream binding, 10-50 gauge strings as standard, though the beautiful plush hardcase our sample came in is extra.

To start with the sound, the three humbuckers are great, and Duesenberg has opted for an unusual way of controlling their selection. Instead of the usual three-way selector, you have what the maker calls a Multi-Tone potentiometer, which allows you to blend the centre pickup with either the bridge or neck positions, enabling you to get tones that many other guitars can't. Even before you get into blending the centre pick up with the other two, the three pickups individually have a nice, fat warmth to them, but still with a little snap and twang. I would compare them to P90s but they are much quieter, being hum cancelling designs.

You could cover some great Blues, Country, Rockabilly or Jazz tones with this guitar. Bring into play the Deluxe 'Tremola' whammy system, and you add even more colours to what the Starplayer TV can do. Frankly, Duesenberg's trem system is everything a Bigsby tremolo system isn't. It stays in tune, is smooth in operation and is very usable and addictive, in a non-Jeff Beck sort of way (so no crazy flutters or tuned harmonics). You just need to get used to what the trem can do, and then it will be there for you, waiting for that little shimmer on your A69 chord!

The neck is comfortable. Not small, but not too big. I would call it substantial. Duesenberg necks are finished with the famous PLEK machine, which is a computerised device that eliminates human error when it comes to frets, intonation and general set-up. The result is that the guitar plays perfectly, with no dead spots or buzzing, giving a consistent, even feel, in all positions. I certainly would not let a PLEK machine loose on any of my vintage guitars, but for the manufacture of a modern Duesenberg, the result is superb.

Duesenbergs are undoubtedly cool guitars with a who's who of name players using them. They have a feel and sound of their own and would be a welcome addition for any professional live musician, or studio session guy. They are not cheap, so are a serious investment for any player, but they certainly have something that your average Strat or Les Paul doesn't. And, anyway, I'm not sure that a list price of around £1,600/$3,300 is so much for such a special guitar, though it wouldn't be an everyday purchase! Though you can get them in most countries, you may need to find a high quality dealer to try one, but it will be worth the trip, I promise you! I'm lucky enough to have a Strat and a Les Paul, so now I am allowed to really want a Duesenberg. And I do. Watch the video.