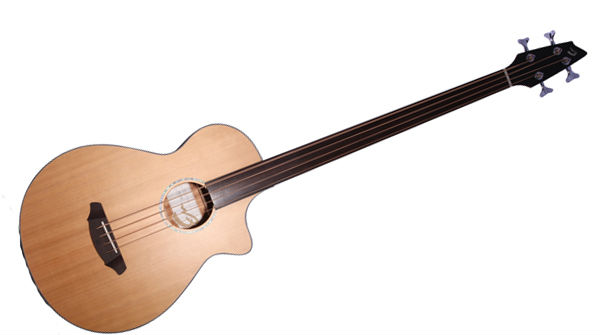 Just as Dan Veall's Doug Wimbish interview arrived, word reached us that the great man (that's Doug, not Dan!) was just about to take delivery of a Breedlove acoustic bass. How could we resist...?

This issue we're enjoying a bit of an 'unplugged' session, with the arrival of a pair of wonderful acoustic basses from Kim Breedlove and his team based in Bend, Oregon. The two fine examples come to us from the UK distributor GoTo Guitars supplied in fitted Breedlove hardcases - a very nice start, even before I got to grips with the instruments themselves!

Breedlove began in 1990, started by Larry Breedlove and his friend Steve Henderson, but today Kim Breedlove, brother of Larry, takes the helm. However, master luthier Kim is no new comer to luthiery and has been building guitars, mandolins and ukuleles and other fine instruments himself since 1974.

Although the two instruments we have in for review look very similar (other than the obvious absence of frets on one of them!) There are subtle differences, as they are two different models from the BJ350 'Atlas' range. Their names, Studio and Solo, imply the purpose of each design as do the others in the range. The Atlas range also includes a 'Stage' model and a 'Retro' model. Breedlove describe the Retro model as 'designed to have balance and power' where the other three models in the range are 'braced for balance but focus on sustain and dynamics'. Also within the range along with the four string fretted and fretless options is a five string model.

First up the BJ350/SMe4 Atlas studio - a snappy little title for a cracking instrument. The technical specifications are in the usual place so let's delve closer at the build quality. Given the price point we are looking at a flawless construction.  Generally speaking, it's easy to pick up on flaws as the camera pans over the work under our bright studio lights, but not this time! What a great pair of review instruments!

The Jumbo body shape was immediately comfortable and well balanced on my lap, with that lovely Sitka spruce top looking great under the aforementioned lights. I've recently become a bit of a fan of mahogany in basses, so it was lovely to see the neck and headstock of this instrument in nato mahogany and the back and sides similarly matched in sapele mahogany.

Construction-wise, both basses in the review feature Breedlove's JLD Bridge Truss system. This is a method of bracing that relieves the strain usually associated with string tension being exerted on the bridge, by moving such tension toward the bottom of the guitar. The guitar features less bracing across the width of the top of the body which allows it to resonate in a more pleasing way. 'Less boom', Breedlove says. Amongst the bi-products of this construction technique is a more even string to string volume. That's a very worthy note for an acoustic bass. All semi-acoustic basses are locked in a battle of tone vs. physical size. To get the most out of an acoustic bass, the body should be more like the size of a double bass to be able to hold its own in a full acoustic band setting! Whatever technique is available to improve the chances of being heard, yet keeping the body size down to a more manageable stature is welcomed with open arms by players 'on the move'!

The neck I would say is of a medium sized carve. It isn't like a clubby slab P-bass neck, nor is it a skinny Jazz neck. It's in the middle somewhere, with a nice D shaped taper making it feel like it has some substance but not being overbearing or fatiguing. The Indian rosewood fretboard is expertly finished and  seamlessly attached as if the neck is a single slab of wood. Great stuff!

Tonally the instrument is resonant with a lovely woody tone unplugged. The mahogany lends depth to the tone and I feel sure that the proven construction techniques that Breedlove uses certainly adds low end girth to the bass.

Moving over to the electronics, Breedlove has employed the talents of L.R.Baggs for both the piezo bridge pickup and pre-amp that is mounted on the top of the instrument in easy reach and view for the player. Both acoustics basses have similar units. The Sme4 features a three band EQ, Presence, reverse phase switch (to help alleviate feedback through monitoring/amps etc) and a tuner. The settings allow for a wide range of tones that accentuate and never stifle the actual timbre of the instrument. This is a really nice touch and I have certainly played many basses where a stock preamp appears to have been thrown in with little thought for enhancing the inherent character or voice of the instrument.