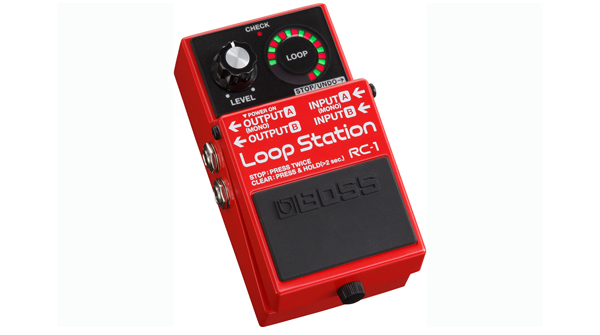 Loop pedals are mighty popular at the moment, with artists such as Ed Sheeran bringing them into the mainstream limelight. There are now many on the market, ranging from massive floor boards to tiny pop in your pocket units. If you're a solo artist who wishes to add some self-accompaniment and beef up your sound, or to create your own practice backing tracks quickly and easily to develop you soloing over, or maybe if you are just in the market for a new Loop Pedal, then read on! Also check out the accompanying video where you can see and hear the pedal in use as I demo it.

The RC-1 is a compact standard sized Boss pedal, and claims to be a “Straightforward looper that is easy to operate”. Back in the day loopers used to be fiendishly complicated bits of kit with multiple buttons and sequences to go through to get them working. Thankfully, over time this process has been made far simpler and more user friendly. This particular model, for example, has just one knob for the level, an LED indicator, and a pedal. It also has a stereo in and out option, plus another out for an additional pedal if you wish to take your looping to the next level. Like the other Boss pedals you'll no doubt be familiar with, it's powered by a 9v battery or the standard Boss power supply, and as you would expect, it's built like a tank.

The RC-1's 12 minutes stereo recording time should be plenty for even the most enthusiastic looper. One cool feature is that a recorded phrase is retained in the pedal's memory even after it's turned off, which is great news if you have just put down a perfect loop and there is a power cut, or the battery runs out.

So how easy is it to use? Well I didn’t need to break out the instruction manual, which is always a great sign! Start playing, press the pedal once and it will start recording, press it again to finish that loop and start an overdub, press it twice to stop. Simple! To start all over again, press and hold the pedal down for two seconds. The 24 segment LED loop indicator is laid out in a circular pattern, and traces around to show you where you are in the loop. Red = recording, Red + Green = overdubbing, Green = playback. Even by Boss's own admission this is a bit of a gimmick, but it’s also quite handy to see where you are in the loop, especially if it’s a long one, and it helps getting your next one in time.

I certainly can't fault the RC-1's simplicity and ease of use. It may be because I have used various loopers in the past that I find it so easy to drive, but I'm quite sure a virgin looper would have no problems getting to grips with this one, quite quickly. The level knob is great for controlling how much you have coming through, and you only have to press the pedal lightly to get it working, it's very intuitive. My only gripe (and it's not confined to this looper) is that you have to press the pedal twice to get a loop to stop, which can be quite awkward; and why when you hold down to delete what you have done does it have to play the loop back at you until its cleared? Would it not be possible to have it offer a silent delete? Yes, you could turn the volume down but again it's something to think about. These are only small issues, and the pedal as it’s intended works great.

Another looper on the market then, and although the RC-1 doesn’t do anything fancy or very different to most of the others out there, what it does do is something very important - it works, reliably and easily, making it very much a plug in and play pedal, causing no faffing around with different settings, which should be applauded, especially for live use on stage.