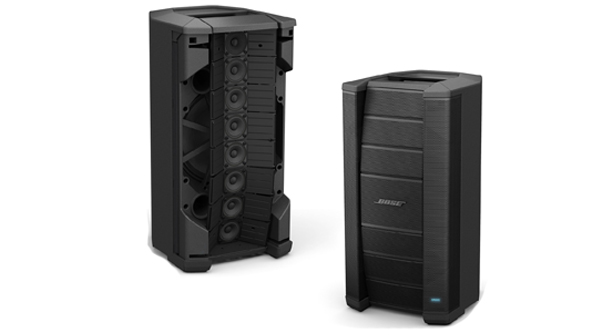 Although the Bose Corporation, founded in Massachusetts in 1964 by the late Dr Amar G Bose, is perhaps best known for its consumer audio products, its innovative approach to professional audio has gained the company acclaim and fierce loyalty in that field.

Debuting in 1972, the Bose 801 was the loudspeaker that built the company’s reputation in live sound. It was superseded in the early 1980s by the 802, one of the first professional loudspeakers to feature a moulded cabinet, and one which is still in production today as the 802 Series IV. So successful was the 802, that it wasn’t until 2003 that Bose introduced another major live sound innovation in the form of the L1 System - a 7-foot, 5-inch wide, 24 driver, line-array tower with a separate bass unit - that redefined portable PA systems and which has been the inspiration for a whole new class of similarly-dimensioned loudspeakers from competing manufacturers.

Now, with the release of the F1 Model 812 Flexible Array loudspeaker and the matching F1 subwoofer, Bose have taken the concept pioneered in the L1 and applied it in a unique fashion. The 812 is the first portable powered loudspeaker in which you can change its vertical coverage pattern so, whether you’re on the same level as your audience, above them on a stage, sitting above you on raked seating, or all of the above, you can adjust the 812 to ensure that everyone can hear your performance.

The 812 features 1,000 Watts of system power that drives not only the eight mid-high drivers mounted in individual waveguides on a flexible front baffle, but also a 12” woofer that sits behind the array and backs them up in the bass. Both the top and bottom sections of the baffle (each containing three drivers) can be positioned to create one of four vertical coverage patterns – “Straight”, “J”, “Reverse J” and “C”. Once set, the on-board DSP changes the EQ to maintain the tonal balance for each coverage pattern. The 812 specifications give coverage of 100° horizontal and 40° vertical in the “C” position - so it looks as though the “J” position covers 20° below horizontal and “Reverse J” covers 20° above. Having this amount of flexibility is certainly useful as I can think of several venues where I have had to angle my own L1 MKII system in order to cover audiences both below and above stage level - though fortunately (so far) not at the same time.

Physically, the Model 812 is quite compact, being approximately 26” high, 13” wide and 15” deep and weighs I at a mere 20kg. Integral handles in the top and on either side ease the task of moving it around and the moulded in mounting points allow for secure and simple permanent installation. A standard pole-mount socket is provided in the base of the 812 for those using it standalone, without the F1 subwoofer.

The Model 812 also features a simple onboard 2-into-1 mixer. The two inputs each have individual level controls and signal/clip indicators. Input 1’s combination XLR/Jack input can be switched between microphone and line level, while Input 2 features a single jack input plus RCA phono inputs designed to accept the output of, for example, a CD, mp3 player or computer-based set-up. The mixer has a mono line level extension output on XLR that parallels the on-board mix between channels 1 and 2. A section marked “System” carries the combined blue/red Power/Fault indicator, the orange Limit indicator and a switch that sets the operation of the front LED indicator to display Power, Limit or Fault modes. The final control allows the user to high-passes the signal being fed to the internal amplifiers if the 812 is being fed a full-range signal when being used with the F1 subwoofer.

Two 10” high-excursion bass drivers deliver fast, solid bass courtesy of the F1’s 1000 watts of system power and a simple rear panel carries the two XLR inputs from which the subwoofer input signal is derived. The two parallel XLRs can be switched between full-range or a 100Hz high-passed output. An overall volume control allows you to balance the F1 to the 812, a Polarity Reverse switch lets you reverse the phase if there’s a problem in that area and, finally, the F1 carries the same indicator switching as the 812.

Because I use a pair of Bose L1 MKII as my FOH system, I was really interested to listen to this new F1 System. With four times the power, the F1 delivers considerably more volume than my L1 and it also has a bit more extension in the high-end. Although the F1 doesn’t go any lower than my L1, its twin 10” bass speakers, driven by 1,000 Watts can shift a lot more air than the four 5.25” units in my twin B1 bass modules can with only 250 Watts behind them.

Bose's designers have had their thinking hats on and, rather than relying on a pole to hoist the 812 above the F1, have stored a moulded system stand in its cabinet - which should avoid the embarrassing arrival at a gig only to discover that the pole is missing in action. Fitting the stand in position and mounting the 812 is the work of a moment. A moulding on the 812 fits into a matching recess in the stand and the whole locks very solidly together.

Unfortunately, there wasn’t time to take the system out on a gig, but playing back a wide variety of music through it - from EDM to acoustic folk - at volumes showed the high level of performance that the Bose F1 system is capable of. The Model 812 on its own performs superbly with any genre of music that doesn’t require a lot of deep bass at high volume, and the F1 sub soon sorts that out when that is what’s wanted.