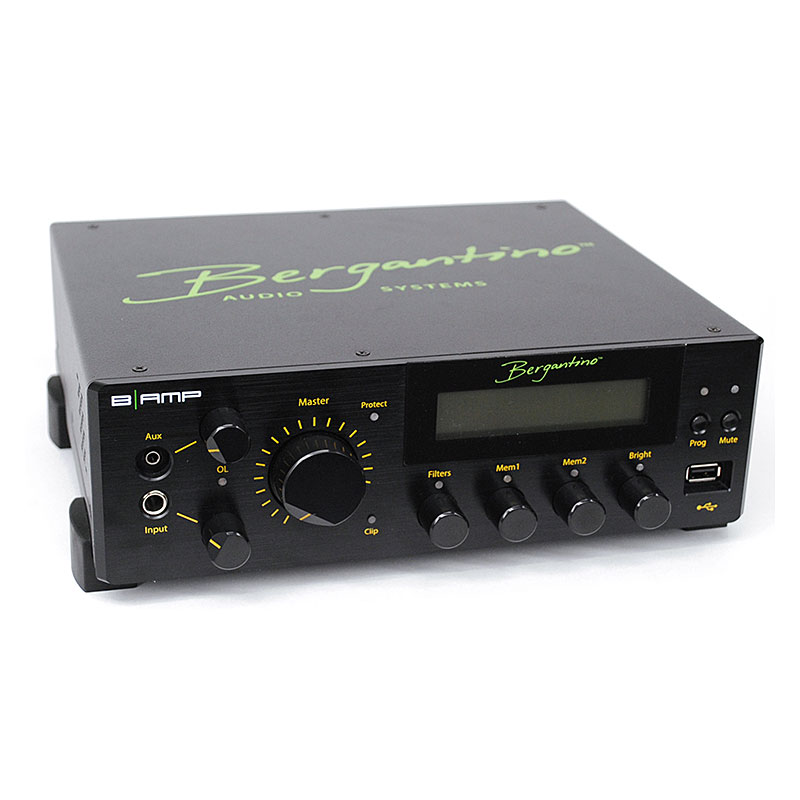 Innovative technology, A noise-free signal path and a ton for features

Dan Veall takes a look at a total game changer in the bass amplification world.Bergantino’s B|Amp is a state-of-the-art bass amplifier that is not only incredibly versatile, but also delivers maximum performance in a lightweight, compact, yet simple to use package.

OK, let's start by working out the pronunciation, shall we? The curiously written B|Amp from US audio specialist Bergantino Audio is pronounced 'bee-amp', so that's that one question out of the way! There's a lot that's different about the B|Amp, starting most fundamentally with the concept. Bergantino seems to be the first company to have specifically matched its amplifiers to the speakers they are going to be used with. When you stop to think about it, it's a fairly obvious idea – but like so many obvious ideas, no one has done it before!

To do this, Bergantino has made a sophisticated amp with a lot of features. Despite that, it is actually simple to operate from the front panel and has a digital display so that you can see exactly what is going on per knob twist. What makes this amplifier so different is that its feature set is accessible via a display menu system. At the press of a function button we are under the bonnet for some powerful additional features. I will do my best to cram as much of those control features into the space here!

Design wise, the Bergantino looks very hi-fi in its presentation but there's no reason to assume it's going to be anything other than fully roadworthy, so on we go. The input socket and instrument level controls are on the left hand side and are paired with an auxiliary input for MP3 device or another audio source, which also has a level control.

In-between the two, an overload LED lets you know you are pushing the input a little too hard. I particularly liked the big volume control in the middle, next to which are another two LEDs to give you more status indication: ‘Protect’ and ‘Clip’ indicators that form part of the safety features in-built.

Underneath the LCD display are four multi function controls. In their default setting they adjust the Bass, Low Mid and High Mid and Treble equalisation level settings. There’s +/- 9db boost and cut from each. The huge selling point for me is that the EQ section allows for adjustment of the frequency centres for each band too. I always feel a little limited with an amplifier that only offers one single (usually mid) band of semi-parametric EQ or less (though there are many that sound great without, I should add). Here, all four are accessible by pushing in one of the knobs for a few seconds. See the specifications attached to this review as I’ve added the adjustable frequency range for each.

Under the bonnet is where it starts to get really interesting. The secondary function on the first knob allows you to access an adjustable high-pass filter and feedback filter. Both of these are ideal for those playing double-bass, but I love the idea of having the HPF there when I am throwing a gauge .190 low E at my backline from my custom Shuker 7 string or Dingwall fan-fret basses. Filtering out frequencies that a cabinet can’t physically reproduce by means of an ‘HPF’ will tighten up the sound as well stopping speaker cones from flapping around pointlessly wasting energy (even low tunings are very rich with overtones and harmonics giving plenty of ‘bottom’ even if the fundamental frequency of the lowest notes are filtered out).

The feedback filter requires a bit of explanation, but if you are an acoustic guitarist or bass player and are being amplified on stage then you’ll probably have suffered from booming or howling feedback problems. The feedback filter is exactly that, an adjustable filter to target those troublesome frequencies and attenuate them without affecting the actual instrument tone too much. There’s more to it than just that, but that would be going too far off topic here.

The far right hand knob engages a bright boost at a single push. The bright function is also adjustable for frequency and gain too. There are two controls in-between are marked ‘Mem’ offering EQ settings that can be saved and quickly recalled, which makes the Bergantino ideal for using, say, two different basses with widely varying tones.

A mute button on the far right hand side of the display is very welcome with a red LED indicating that you are being silenced. The same button also engages a chromatic tuner that will take you down to the B of a five string. Yes, I tested that, too. It doesn't seem quite as reactive as my stand alone tuner, but it appears to do the job.

Things get even more interesting with access to the advanced menu and yes that is a USB port on the front, which is where the speaker matching comes in. Jim Bergantino has, I think, finally cracked an age old problem for bassists. In the company's own words, 'The B|Amp takes a completely new approach to bass amplification by considering and including the speaker cabinet’s response as part of the amplification signal path.'

What this essentially means is that Bergantino has profiled the response of its own bass cabinets and with the use of exacting DSP, makes the amplifier and cabinet work in harmony. In essence, it's a bit like the way sound engineers set up a system at a venue, using RTA analysis measuring devices. Bergantino believes that this then frees up the onboard EQ on the amplifier for tone shaping or making up for shortfalls in room acoustics.

In the option menu, you can scroll through a number of Bergantino cabinets ‘profiles’ that have been loaded during manufacture – of course, you can bypass the profiles altogether if you choose. Applying a profile to the Bergantino cabinet you are using is an additional layer of clever tone shaping.  In our video I switched between bypass and the setting for the included HDN112 we are reviewing. The cabinet sounds great without, but with the DSP functionality switched in it is actually brilliant!

It's very hard to describe in words the effect this has and whether it will translate when you listen to the video is impossible to say (a lot will depend on what you're listening with, of course) but take my word for it, in the flesh it does make a tremendous difference and I'd seriously suggest you try to get to hear one of these systems for yourself.

Round the back, the B|Amp offers a pair of Speakon sockets, an effects loop and a configurable line out that can set as a pre-amplifier send, or a tuner output, depending on menu setting. A headphone socket round there too means practising, silent recording or IEM use is catered for too. DI output means that you’ll be hooked up to your PA or recording system with pristine studio quality audio.

The B|Amp is a hefty beast on the output side, too, delivering 700W in to a 4 ohm load, but being stable down to 2 Ohms as well. Once again, a menu feature configures the amplifier for the additional, load kicking in the fan to help keep the ‘engine’ cool. It weights a mere 4kg, by the way.

Out and about the B-Amp is portable and fits nicely in to a case when off on tour. Given that the B-Amp also features an auto sensing power supply too, well, that could easily be overseas without worrying about flicking switches to make it work.

We chose to match the Bergantino with one of the company's own speakers, an HDN112. This is exemplary in its quality of manufacture. Premium hardware including neodymium magnet woofers and phase coherent tweeters come as standard and, of course, there are Speakon connectors on the back, plus a tweeter attenuator should you wish to tweak the top end response of the cabinet. I found that leaving the control at the flat setting with the HDN112 profile engaged needed very little tweaking. I mean, no tweaking! I’ve heard my ole Fender through studio monitors for countless hours and frankly this was a familiar experience tonally, even if my strings were a little off bright having, indeed, been recording with the bass recently.

The ported HDN112 is a punchy cabinet in the lows - more than capable when used with any cabinet I am sure, but I have to say it again - the profile binds the amp and cabinet together tonally. It’s hard to describe sound, other than to say it’s just what I wanted to hear. The HDN112 design uses a Baltic birch baffle, but weight savings are made elsewhere by using lightweight Italian poplar resulting in a very respectable weight of just under 13Kg if my calculations are correct.

Rounding up then: if you are looking for a system that has little colouring in the signal path, provides a PA-like (or studio monitor for that matter) response, then you are certainly looking at the new place to start. No exaggeration, this is premium kit and that weak link in the way that an amplifier and cabinet have never before been exactly matched has finally found a solution.

In terms of our rating, we wrangled a bit over this one as it is by no means cheap but then again look at what you're being offered here! We reckon it's actually very good value considering how advanced this product is compared with anything else we can think of - hence the extra half star!

We are grateful to Bass Direct for the loan of this amplifier and cabinet – www.bassdirect.co.uk

Variable Feedback Filter: Adjustable from to -6db to -12db in 1db increments Frequency range from E1(41hz) to G3 (196Hz) in half step increments off

Programmable Chromatic Tuner stable down to low B fundamental