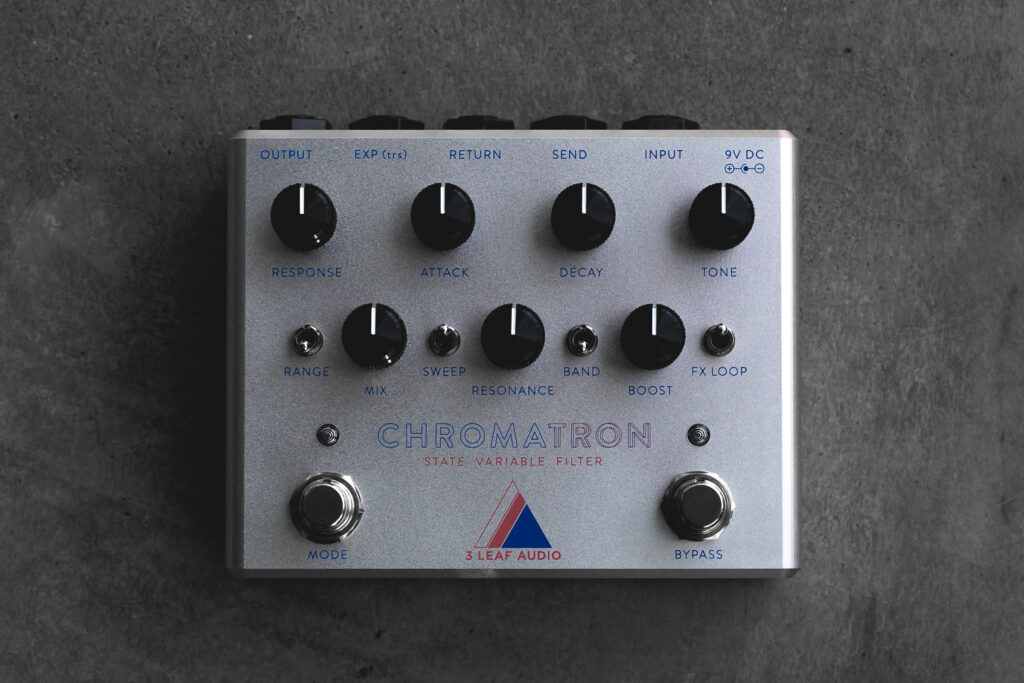 A surprising amount of facilities in one box.

Boutique prices and import duties to affect prices here in the UK.

Spencer Doren, the mastermind behind 3Leaf brings us yet another finely tuned device to wet our creative whistle in the shape of the 3leaf Audio Chromatron Envelope Filter. Dan Veall delves deep with the optically-controlled analogue filter, that can switch between envelope control and manual control via expression pedal with the push of a button.

Today’s little container of joy is named “Chromatron”. It”s a “state variable filter”, which to the layman is essentially an Envelope Filter, but not entirely as this clever little unit offers access to manual control via an expression pedal input - yes, you can relinquish control from your own instrument dynamics and manipulate the filters in the same way that you might with a wah-wah pedal as an example.

3Leaf, or rather Spencer, a one-man operation, has been tweaking this particular circuit for ten years, his website describes and goes on to explain that the Chromatron is an optically controlled analogue circuit whose envelope detector blocks have been tweaked to deliver those sharp vintage accents but also the synthy tones that I really enjoy too.

It is with no surprise that I suggest you check out the review video as I tackle the pedal in solo with no other effects added. Here’s another example of a unit that despite having a handful of tweakable knobs, offers up a huge array of tones. I easily ran out of time and in reviewing, stuck to just a few demonstrations. I would whole-heartedly suggest getting out and spending some time with the Chromatron to uncover what else it has to offer. (Especially as I was unable on this occasion to demonstrate the manual mode)

Let’s do the usual then. It’s off to the front panel for a brief description of the various areas of the signal path.

As per my review video, I started in the top left-hand corner by setting the response of the filter depending on the instrument I plugged in as each will differ in output levels, this, in turn, affects how the pedal reacts. Once I’ve set up the Response knob, it’s across the top line to the Attack control which sets the speed that the filter opens up. Similarly, the Decay knob next door sets the speed that the filter then closes. Both of these react differently in “reverse sweep” mode. The Attack knob becoming a “minimum cut-off frequency”. With the filter having a huge sweep, it’s nice to be able to decide ‘how far’ it goes and the addition of the Tone knob does indeed set the max cut-off. It’s worth noting that before setting this, the Range toggle switch moves the broad frequency range depending on your application.

I mentioned the Sweep toggle earlier which selects the direction of filter, either upward or downward and understandably, if you are changing modes then it’s necessary to adjust at least the Attack and Decay knobs to taste as well as it’s not a universal setting you can leave. To get close to those really strong filter effects heard on cool bass songs, I dialled in more Resonance which internally sets the amount of feedback resulting in a resonant peak making the effect more pronounced.

I personally treated the Mix control and the Band toggle switch as a pair of functions I would set together. Low Pass and Band Pass responses are available on the toggle, and I found that even though Band Pass had a more aggressive impact, the low frequencies were more likely to be lost and thus I used the Mix knob to dial some of my clean bass sound back in to get more depth. The Low Pass setting has more natural low end in the filter’s output. Two very different sounds that you’ll want to decide which is bet for your own use.

If like me you want to punch through the mix and be heard, the Boost dial is simply a clean gain stage after the filter adding extra level should you need it.

Aside from the Bypass foot switch on the bottom right-hand side to engage the effect, we have an FX Loop switch and a Mode foot switch. The latter used in conjunction with the EXP socket on the back of the pedal bypasses the “envelope detector” in the pedal diverting manual control to an attached expression device - which could, of course, be a foot controlled pedal.

Across the back panel, the Input and Output sockets flank a pair of jacks for an FX Loop. Interestingly Spencer has already thought of the limitation that caught my mind when planning my review that an internal loop might offer and has the solution included: One of the problems with putting effects that eat dynamics before an Envelope Filter in you signal chain is that the detector circuit will not necessarily operate to its full potential. By adding effects within a loop in this pedal, it is possible to move the detector circuit alone to the start of the chain, thus you can have your distortion or compression, whatever, before the Envelope effects. Great! But what happens when you turn the effect off altogether? Being in a loop will they not be turned off too? 3Leaf’s FX Loop toggle decides if you want the external effects to be left in the chain when the Chromatron is bypassed, or you can have everything bypassed when Chromatron is. Neat! On the subject of the FX Loop, referring to the manual, you can have external instruments trigger the envelope effect on your bass!

Power should be delivered to the pedal with the usual 9VDC “pedal power” adaptor (refer to current consumption etc) via the jack on the back of the pedal.

Throughout the review, I really enjoyed dialling tones and found that it was easier to locate the sound I was after verses some filters I have tried previously away from the studio. I have no complaints about sound quality and know that 3Leaf use the best components to ensure low noise and tonal quality. 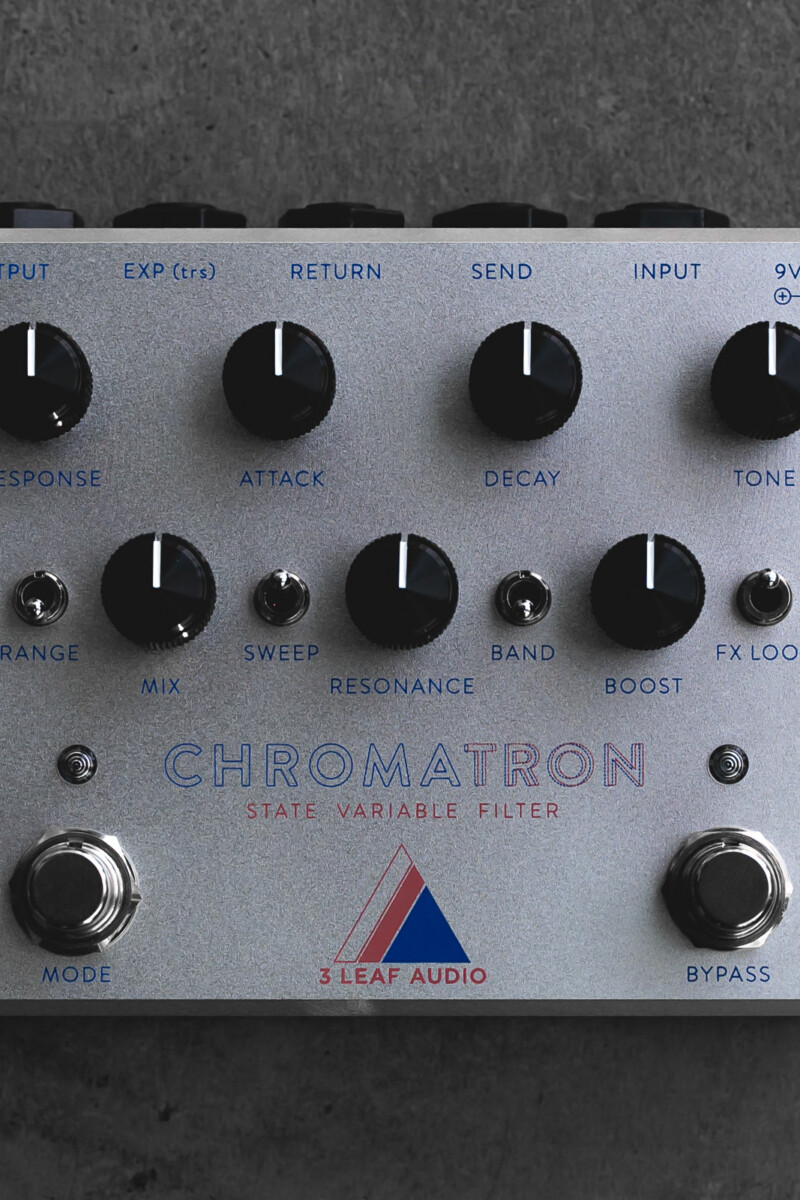 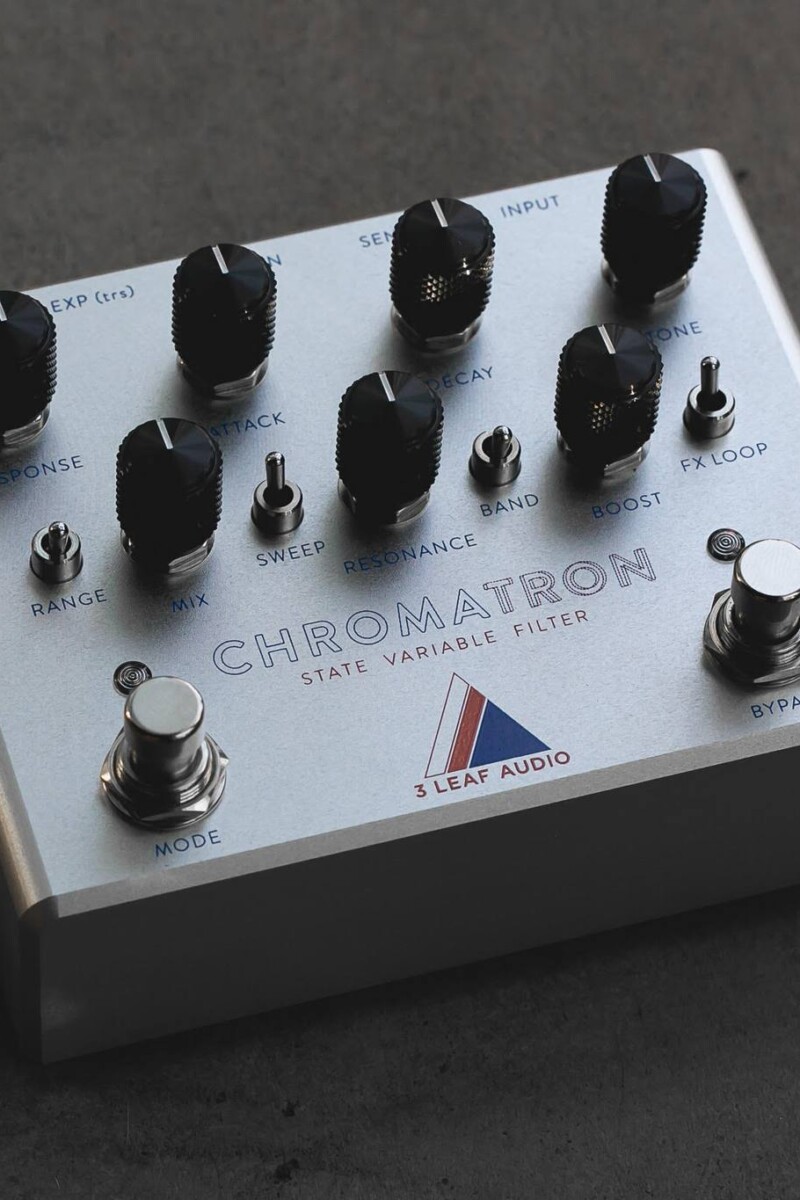