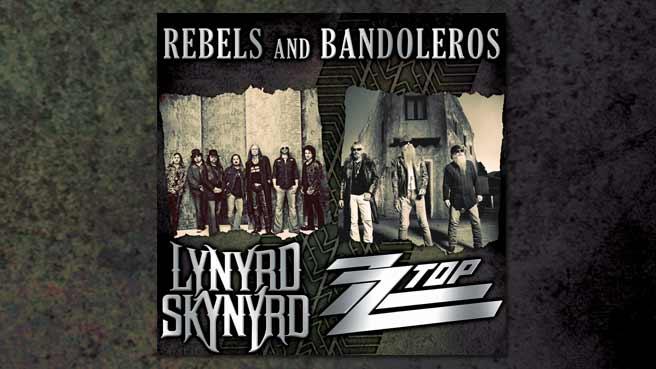 ZZ Top and Lynyrd Skynyrd are teaming up for a tour this spring.Dubbed the Rebels & Bandoleros Tour, the shows will kick off onMay 12 in Wichita, Kansas, and finish three weeks later in OrangeBeach, Alabama.

The two bands have been on the road together before. 11 yearsago they joined forces for a tour that lasted almost a year andthey also played alongside each other back in 1974, when ZZ Topinvited a then up-and-coming Lynyrd Skynyrd to be part ofThe

In a prepared statement, Skynyrd's Johnny Van Zant said, "Welove the guys in ZZ Top, and their music, and can't wait to getback out on the road with them. This show is an event that the fansare going to love." Billy Gibbons was similarly enthusiastic,saying, "Rebels & Bandoleros is more of a coming together offriends than a mere tour. We're delighted to be hitting the roadwith our Skynyrd brethren once more. It's going to be a greatride."

Both bands will be touring in support of new material. Earlierthis month, ZZ Top released Texicali. The four trackdigital collection marks the band's first studio recordings in nineyears. The collection serves as a preview of the band's forthcomingalbum. No release date has been announced for the full-lengthstudio album, which remains untitled, but a late summer or earlyfall release is expected. The four tracks thatcomprise Texicali, like the forthcoming album, wereproduced by Rick Rubin and the band's Billy F Gibbons and include"I Gotsta Get Paid", "Chartreuse", "Over You" and"Consumption".

Lynyrd Skynyrd will tour in support of their forthcomingalbum, Last Of A Dying Breed. The band's thirteenthstudio effort is scheduled to hit stores on August 21. The newalbum marks a reunion with producer Bob Marlette, who produced theband's last release, 2009′s Gods & Guns.

"We had a lot of fun and the music really flowed for us, sothat's when you know you are onto something good," said guitaristGary Rossington in a press release. "We can't wait to let the fanshear these songs and play 'em live."