Yes to Share the Stage with The Musical Box, Renaissance, Carl Palmer and Volto! 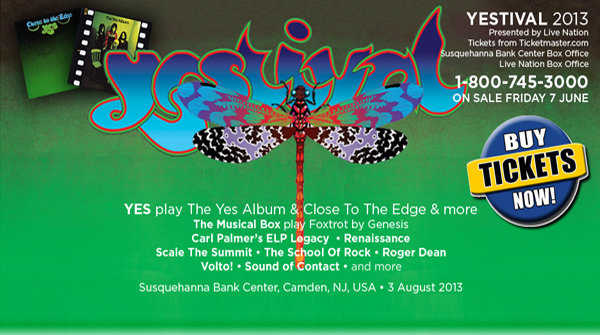 Yes to Share the Stage with The Musical Box, Renaissance, Carl Palmer and Volto! -

The iconic and Grammy-winning rock band Yes have announced the set times for their first-ever Yestival, taking place this Saturday, August 3 at the Susquehanna Bank Center in Camden, NJ.  A day-into-night musical adventure in full quadraphonic sound, Yestival will feature a full Yes set as well as performances by The Musical Box, Renaissance featuring Anne Haslam, Carl Palmer's ELP Legacy, up-and-coming progressive rock band Scale The Summit, and Volta!, a new band featuring Tool drummer Danny Carey plus a second stage of all-day entertainment with performances and a special appearance by The School Of Rock.

Also, iconic cover album artist Roger Dean has revealed new artwork created just for the festival (above).  The British artist--who has created many of the memorable Yes album covers since 1971, as well as his work with other like-minded artists--will be at Yestival where there will be a showing of his art; it's a rare opportunity to view and purchase original paintings, sketches, limited edition prints and collective memorabilia. There will also be a vendor village featuring the artwork of both Carl Palmer and Annie Haslam.

In addition, there will be the CRSA/Classic Rock Society of America multi-media booth, where concertgoers: can take photos in front of the official Yestival backdrop, watch rare interviews and performance on video screens, view Prog Rock album art and signed lithographs, live tweet their friends, receive a collectible Yestival guitar pick and much more.

Yes-bassist Chirs Squire, guitarist Steve Howe, drummer Alan White, keyboardist Geoff Downes and singer Jon Davidson--has been enjoying a successful 2013, with a world tour marking the first time since 1973 that the band has performed any album onstage in their entirety. At Yestival, the multi-platinum progressive rock titans will perform their classic albums--1971's The Yes Album and 1972's Close to the Edge--in their entirety and more.

Go to www.yesworld.com for the latest tour dates and ticket links. For tickets to Yestival go to www.ticketmaster.com.  Travel Packages, provided by CID Entertainment have sold out. The lucky fans who purchased them will receive hotel accommodations, shuttle transportation, VIP tickets with premium seating and more!