Wolfgang Van Halen Talks About Carrying On With The Band Aft 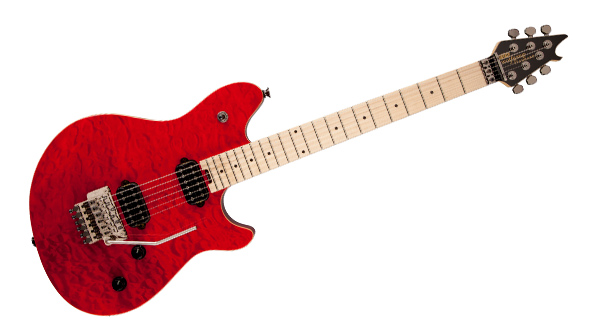 Eddie Van Halen and his Bandmate/Bandleader/Son Wolfgangrecently sat down with Esquire magazine to talk all things VanHalen and the prospect of twenty-one-year-old 'Wolfie' continuingthe band after his father retires. An excerpt ofthe interview follows:

ESQUIRE: Did you actually have to decide at onemoment that I'm going to be in this band? Or did you just feel likeyou were - I mean, there had to be a point where you're like, Holyshit, they're really planning this thing around me.

WOLFGANG VAN HALEN: I guess it really didn'thit me until, like, the first night of the tour, in 2007. It justfelt so normal, because we had already been rehearsing for twoyears. It just kind of fell into place, you know? I didn't reallyhave anything that I felt like I needed to do other than music.It's the only thing I had, I think.

ESQ: So you joined when you were fifteen?

WVH: We started rehearsing when I was almostsixteen, like four months before I was sixteen. But then werehearsed for, like, a year and a half, two years - it takes areally long time to get shit done - but by the end, we were allpracticed up. It's just so crazy. We're playing while rehearsing.We started rehearsing and recording ourselves for the record rightbefore I turned eighteen. So for about two and a half years, we'vepretty much been rehearsing every single day - excluding Sundays,maybe, just the three of us, and it's funny, it doesn't feel likework at all. It just feels like something that we do.

EDDIE VAN HALEN: Not even close to work - wejust kind of meet each other every day. "See you in the studiotomorrow!" "Okay!" "You wanna play?" "Yeah, okay, let's play."

EVH: No, but half the time it was because I wasso tired of setting up mics and engineering.

ESQ: You don't have some guy that does that foryou?

EVH: No, because I know what I want. The shit Irecord sounds way better than the record.

WVH: The early demos of just the three of ussound fantastic. We had severe cases of demo-itis.

WVH: The band has never sounded this good.

WVH: It's kind of just a ritual, almost. We'vebeen doing this new thing to mix it up - every single show we'veplayed has been different - I want to keep it interesting. Sincewe're on the second tour, I think we've earned the ability to playolder songs, like "Hear About It Later." Last night I was so happywe played that.

ESQ: Have you written an entire song for VanHalen?

ESQ: A lot of people who are famous forsomething, their kids turn out to be assholes.

WV: Yeah. You kind of inherit the lifestylewithout any of the skill that got them to where they were.

ESQ: Seems like you're the new face of VanHalen. I saw this real kind of leadership quality in what you weredoing, not only onstage, but when you're backstage, you're the guysaying, "We're going to play this," "Let's rehearse this," "Can welearn how to play this?"

WVH: I mean, I kind of come up with the setlists. When we've got a song that we haven't done, it's like, weshould probably run through this before the show and figure outlike the count of it. Because dad, for some reason, counts in odds.He'll land on three instead of four.

WVH: Yeah, I have to look at him sometimes andgo -

EVH: You making fun of me?

WVH: He still, to this day, does not know thelyrics to "Beautiful Girls." You know how we go, "top of the world,beautiful girls"? He has it written down on his pedal board. On thelast tour I used to have to go [mouths lyrics]. You were at soundcheck yesterday when we were practicing "Full Bug" and he was like,"I don't know when to stop!" So I had to go over there and was justlike, "Now!"

ESQ: This music was written well before youwere even born. And you enjoy it?

ESQ: The whole sound sounds much meaner. Imean, it is just thunderous. To hear all those old Van Halen songswith your bass, it's like, bass-plus. It's like turbocharged VanHalen.

EVH: The bass sounded a lot meaner at home whenwe recorded it ourselves.

ESQ: Well shit, man. How the heck are we goingto hear that stuff?

EVH: Eh, we'll leak it out. The demos of thedemos.

ESQ: Are you writing music on the road?

WVH: Not much. I mean, we have a lot of ideasthat we wrote that never made it to the record that were so awesomeI wish they had made it. But we kind of held it off to anotherrecord, possibly.

ESQ: Because there's just so much material?

ESQ: But when your father is retired, okay-

WVH: That's going to be a while.

WVH: Yeah, it kind of falls on my shoulders. Ithought it would be really fun if dad and I just sat down andstarted jamming and see if we came up with something together,instead of him writing something and me putting my spin on it.