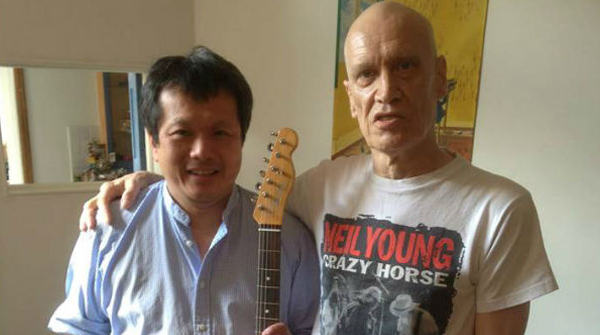 A music fan who helped diagnose the true nature of Wilko Johnson's cancer has spoke of how he introduced the pub-rock guitar icon to the doctor who saved him.

Chan tells the Gloucestershire Echo how he contacted the former Dr Feelgood man which led to the pair meeting in July last year to discuss many things, and ultimately his health.

He said (via Classic Rock) : "Lo and behold, last October Wilko was playing at the KoKo club in Camden and he was looking much better than he had done in July and he’d released an album with Roger Daltrey and I thought, ‘What’s going on’. I thought that he couldn’t have what he thought he did.”

Chan firmly believed that Wilko's diagnosis of the common form of pancreatic cancer could be wrong.

He adds: "I spoke to some pancreatic experts I know, including Emmanuel Huguet who works at Addenbrooke’s hospital in Cambridge. I went back to see Wilko at his home and examined him for three hours and read the background and I just couldn’t believe that the diagnosis was right. I asked him if he’d go and see Emmanuel."

He was correct, and Dr Huguet operated successfully on Wilko in May of this year.

Chan adds: “Now Wilko is saying he’s cancer-free and that’s wonderful. He’s planning to get back to recording another album and playing with his band again. And I think he’s quite likely to be looking at a normal life expectancy.

“It’s a great bonus that tens and hundreds of thousands of music fans will be able to enjoy more of his music, but the important thing is that he’ll be around for his family, he has two sons and a three-year-old grandson.

“I’m just pleased I could help him, as a doctor it’s important to do the right thing.”