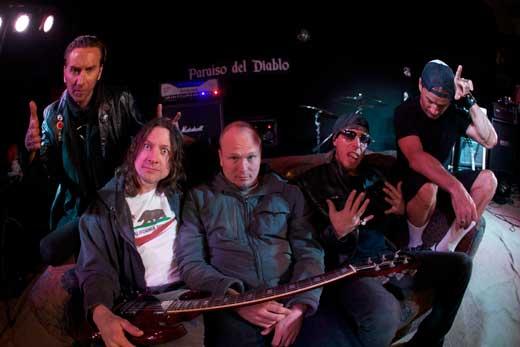 Ugly Kid Joe are back after a 15 year absence with a brand new video and news of a 6-song EP due to be released digitally on June 5th and on Cd July 9th. Watch the offical video for the single and the band's mini-documentary below.

Paradise', taken from the upcoming 'Stairway To Hell' EP.

'Stairway To Hell' heralds Ugly Kid Joe's return, containing songs spanning the full repertoire of influences which made Ugly Kid Joe one of the prime soundtracks for young snowboarders, surfers, keggers and characters worldwide. Whether it's 'Devil's Paradise', with it's hypnotic riffery and hook line, grooving and grinding it's hips seductively, the melodic power-fueled darkness of 'No One Survives' or the irrepressibly memorable chug-n-chorus of 'I'm Alright' it's clear that Ugly Kid Joe have everything they started with plus fatter chops and a (frankly) superior curve on songwriting.

Ugly Kid Joe released three full-length albums and toured extensively throughout the 1990s before disbanding in 1997.