Tom Morello Is Inviting You To Join His Band 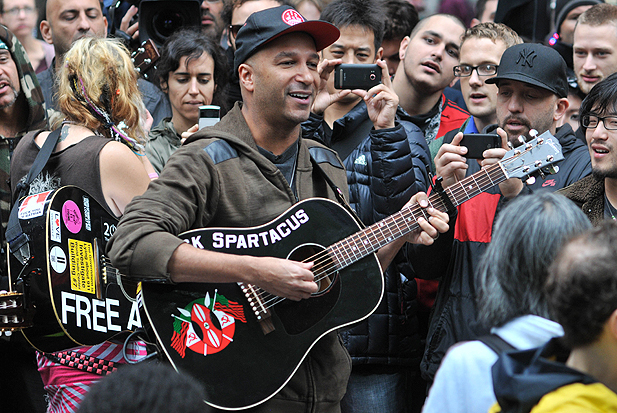 Rage Against The Machine guitarist Tom Morello is calling out for 10,000 guitar players to join him at Occupy Wall Street's May Day protest today.

The guitarist and singer, who performs as The Nightwatchman, wrote on his twitter feed:

I'm putting a new band together and ur in it. Our 1st rehearsal is tomm noon @ Bryant Park in NYC. Looking for about 10,000 guitar players

He added: "Join my new band! Don't have a guitar? Bring a drum. No drum? Bring a kazoo. No kazoo? Just come. Bryant Park/noon tomm. #MayDayThrowdown"

Tom Morello - who has recently joined Bruce Springsteen on a number of US tour dates - has been linked to the Occupy movement since it formed last year. In 2011, he played shows at Occupy camps across the world, including those in London, Los Angeles and New York.

The army of guitarists will gather in Manhattan's Bryant Park and march down to Union Square at 12 noon to draw attention to the need for greater social equality.

Morello previously joined protesters in London and treated them to a brief performance, while he also played for Occupy demonstrators in Austin, Texas during the South By Southwest music and arts festival in March (12).