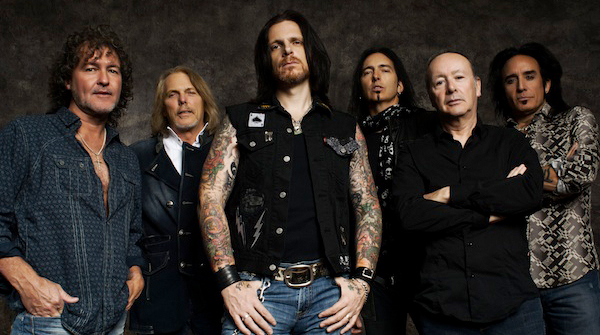 The latest incarnation of Thin Lizzy willreveal their new name along with details of their upcoming albumover the Christmas period, reports Classic RockMagazine.

On the subject of the band's name change guitarist Ricky Warwicksaid via Facebook:

"A massive thanks to all fans who have supported Thin Lizzyfor the last two years. It's been the biggest honour and privilegeof my life to be part of this.

"Stay tuned for big announcements on Christmas on the albumand new band name. 2013 is gonna be a very busy year!"

Guitarist Damon Johnson hinted in a recentinterview with MetalExpress Radio at some of the reasons of the name change, hesaid:

"There's other bands out there that are established with newlead singers and different members of the band. They've made newmusic without their most famous lineup.

"We thought for a while that's exactly what we were going todo, and the songs were written under that umbrella - 'We've got tomake a Thin Lizzy record.' That raised the bar incrediblyhigh.

"It was a question for Brian and Scott all along. We'regrateful for the massive support we've got from Phil's family, hiswidow and his daughters. They've been very supportive of everythingthat Thin Lizzy has done, particular since Ricky joined. But I knowthey expressed some concern about the concept of brand-new originalmaterial. I get it, man, I totally get it.

The Bournemouth show on the 29.11.2012 and London show on the17.12.2012 will be recorded live on the night and available to pickup immediately after the last note of each gig.