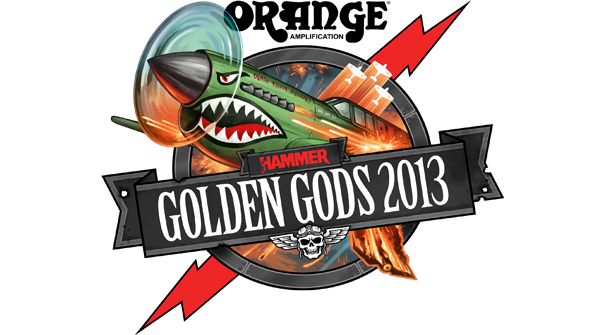 Orange Amplification is delighted to be theheadline sponsor of the Metal Hammer Golden Gods Awards for the second consecutiveyear. The 2013 awards promise to be even bigger & better, withmore explosive live performances and heavy metal mayhem.

The Orange Amplification Metal Hammer Golden GodsAwards 2013 takes place on the 17th June 2013 at theIndigO2 with Motörhead, one of the world's mostseminal rock bands headlining what will be their most intimate showin years.

"It's awesome to be headlining our first ever award show. It'san honour to play some kick ass rock'n'roll at the Golden GodAwards.'

Orange Amp endorsees are set to dominate this year's annualhomage to metal with twelve of them nominated for awards.Bleed From Within and BuryTomorrow are up for the Best New Band award,While She Sleeps, AskingAlexandria and Kvelertak compete for theBreakthrough award and Bring Me TheHorizon look for votes as the Best UK Band.Defttones, Stone Sour andDown are challenging each other for the BestInternational Band award, Clutch andLimpbizkit are rivals for the Best LiveAct award and Jason Newsted'sReturn are going for the Metal As F**kaward. With Orange amps, the amp of choice for metal guitaristseverywhere, these awards could be an orange 'whitewash'. Vote foryour favourite bands and be in with a chance of winning a pair oftickets that money cannot buy.

"Orange Amps are an integral part of the new hard rock andheavy metal scene" commented Damon Waller, ManagingDirector, "being here championing the Metal Hammer Golden GodsAwards, which are designed to celebrate metal's real successstories, shows that Orange Amps care and will be setting the tonefor years to come."

To find out more about the Orange gear and their artistsnominated for this year's awards visit www.orangeamps.com.

For more about the Golden God Awards, vote foryour favourite bands and be in with a chance to win free tickets goto goldengods.metalhammer.co.uk