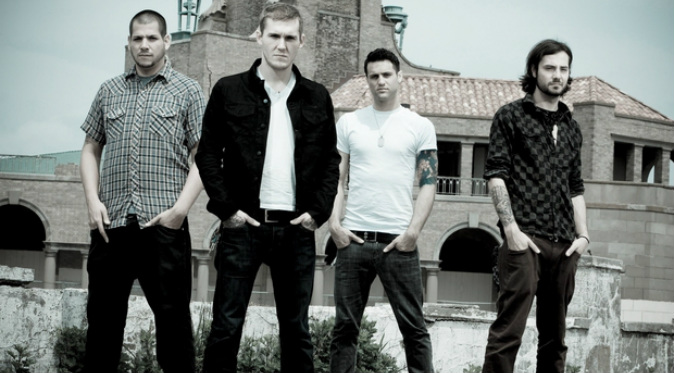 The video (watch below), features footage taken on location at ashow in the band's homestate of New Jersey.

Produced by Brendan O'Brien and recorded and recorded inNashville.  The band have described the songs from'Handwritten' as "pretty personal and pretty aggressive".

The Gaslight Anthem spoke to Gigwise earlier this week about theband's dreams of playing at Wembley Stadium and the recording oftheir new album. An excerpt from the interview follows

Having debuted your new track, '45', on Radio 1, whatkind of feedback have you had?

It's been crazy. I knew it was premiering on the BBC but Ididn't know exactly when and the way I found out was through myTwitter which went insane. There was post after post - it was greatto see that reaction because it's the first thing people have heardfrom the album and they're saying it's their favourite song. It'snice for me to feel validated.

Did you always think this would be the first single forthose reasons?

I was like, 'this is gonna be the first single,' but I didn'tknow how it was gonna work because it's my first time on a majorlabel, but I had a gut feeling. That's the thing you look for whenyou write a song and release it, for people to like it. You feellike it's all worth it.

You've described new album 'Handwritten' as being prettyaggressive. Is '45' a good indication of what the rest of the albumis like?

There are really fast songs and then there's one song that'sfaster than anything we've done since 'Sink or Swim'. Even themid-tempo songs are intense and guitar heavy. It's definitely not alaid-back record, it's explosive and it bursts out at you. That'sthe kind of thing we were feeling.

What put you in that frame of mind? Did changing labelslast year have an effect on that?

My friends have said that if you get a new member or a newguitar it injects a certain energy, so when you're around newpeople, and especially people who are excited, it makes you feelgood. The cool thing is, Side One Dummy [the band's previous label]are really excited and supportive of us. They didn't look it as abad thing.

You can sense an ambition about the band, so it makessense you'd make this move at some point.

Yeah, it's no secret that we wanna play big shows and sell a lotof records and be a big band. At the same time, there's a certainresponsibilty we all feel. We don't just want to drive around inAston Martins. If we're a big band it means we get to have a bigvoice and take out bands that might not have otherwise had achance. If we're making tons of money that means we can give moneyto all the charities we want to; it helps you have more of animpact on your community. Plus, it's awesome to play - I'd love toplay Wembley Stadium. There is a responsibilty, though. We'd benothing without our fans.

Given your plans to tour through to the winter, whatdoes this record sound like live and are you confident playing itlive yet?

It sounds big! We were playing a lot of shows with the FooFighters last year and that got us jazzed up to do some big rocksongs, but I wouldn't say it doesn't sit with the other records. Itsounds brighter! I mean artists like Pearl Jam and Springsteen -big sounding rock records.

Did you feel like side-project The Horrible Crowes wassomething you had to get out of your system before you got back toGaslight?

Definitely. I wasn't tired of it, I just ran out of ideas. Yoursteam can run out a little. The last thing anyone wants to hear isa half-arsed rock record.

Did you have a greater appreciation of that big guitarsound going back into the studio for this album?

I was on fire by the time I got back in there.

You recorded in Nashville. How did the atmosphere of theplace influence your album?

The vibe of the studio was very encouraging. We're one of thosebands that hangs out with the interns. At the end of the recording,two of the guys pulled us over and said, 'You're the coolest band,noone ever acknowledges us.' We bought them dinner and gifts 'costhey're important. You can't run a studio without them.

What is it about Nashville that so many American artistsare drawn to?

Nashville's just got this cool history. It's country music,which we didn't know and is out of our league which is cool. Wedidn't know anybody down there, so it was like a virgin experiencebeing in a town where you dont know anything. That was the thingwith the album - we wanted to record like it was our first record.What would Gaslight Anthem sound like if we started in our 30s? Wedidn't want those outside influences.