The Future of Hammersmith Apollo Under Threat 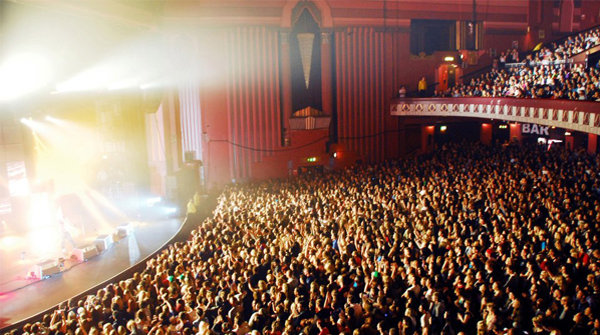 The Future of Hammersmith Apollo Under Threat-

The Hammersmith Apollo is under threat from property developerslooking to turn the West Londonlive music venue into a furniturewarehouse.

Dubai based Sheik Farhi Erl Pitts has reportedly tabled a £75million bid for the iconic venue, which is currently owned jointlyby AEG Live and Eventim.

"I have great affection for the Hammersmith Apollo - orOdeon, as I prefer to call it. As a rock fan myself I have seenmany great gigs there, including Kiss in 1976. But with the livemusic scene in the doldrums, I believe the Apollo's days in itscurrent guise are numbered."

Whilst talking about his plans to convert the Apollo into agiant furniture warehouse, Farhi Erl Pitts unfavourably said:

"This part ofWest Londonis currently undergoing massiveredevelopment and regeneration, with many new houses and apartmentsbeing built. I feel there will be great future demand inHammersmith and its environs for furniture of all shapes andsizes.

"But I will do my best to preserve some of this greatbuilding's rock'n'roll identity," he vowed. "Our bed department,for example, will be called No Sleep Til Hammersmith. I will alsosub-let part of our floorspace to World Of Leather, and get my goodfriend Rob Halford to attend the grand opening. Plus any band whorecorded a live album there will be able to claim a freethree-piece suite."

A campaign is being launched to try to prevent Sheik Farhi ErlPitts' proposed plans.

Hammersmith resident Frank Dobbs, a former roadie foroutre psych-rockers the PinkFairies,  has taken up the baton.

"The Apollo is steeped in rock'n'roll history and we cannotallow it to be sold to a shyster like Farhi Erl Pitts. In thecoming weeks I shall unveil the full details of my plans. However,I have already enlisted the help of Larry Wallis [PinkFairies/early Motörhead guitarist], who will be busking outside thevenue while it stages Wallace And Gromit's Musical Marvels over theEaster weekend. Any money deposited in Larry's flat cap will beused to fund the anti-Sheik campaign."