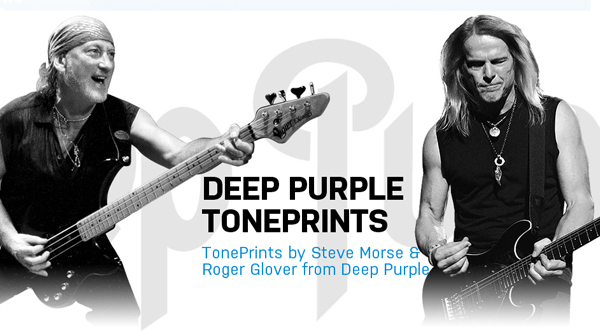 TC Electronic announces a TonePrint campaign featuring Deep Purple. With two TonePrints from Roger Glover and three from Steve Morse, there is something to love for guitarists and bassists alike!

The Roger Glover and Steve Morse TonePrints are available immediately and free of charge at www.tcelectronic.com/deep-purple-toneprints or via the free TonePrint App for iOS and Android.

For guitarists, things are all about the legendary Steve Morse, who provided 3 TonePrints that quickly became fan favorites. And we think this celebration of Deep Purple and Steve Morse will make so many more guitarists happy!

First of, Steve made the Steve Morse Delay – available for Flashback Delay and Flashback X4 Delay. Steve has a unique and very cool way of using his delay. He basically uses two stacks, one for his dry sounds and one for his delay sounds and he sets the mix between them using a volume pedal on the delay stack - it's that mix we captured with this TonePrint. All knobs can be set at 12 o'clock for Steve's standard delay sound. With the Delay Time knob all the way down, the delay is so short it actually functions as a chorus too, which is exactly how Steve uses his second Flashback Delay pedal.

Next, Steve provided TonePrints for Hall Of Fame Reverb – one is simply called Beautiful Reverb, which works particularly well for big clean sounds, with a full and lush tone.

The final TonePrint is called Spring. The springy character of a really good spring reverb is unmistakable in this TonePrint and useful in countless Rock and Pop genres. Steve's twist on this TonePrint makes it suitable for lead and crunch sounds in particular.

“Deep Purple is one of the cornerstones in music, it’s difficult to overstate their importance. Steve Morse is one of the most versatile guitarists I know. How he manages to be completely comfy with wildly different genres is such a compliment to his musicality – that’s the kind of guy you just know will make great TonePrints."