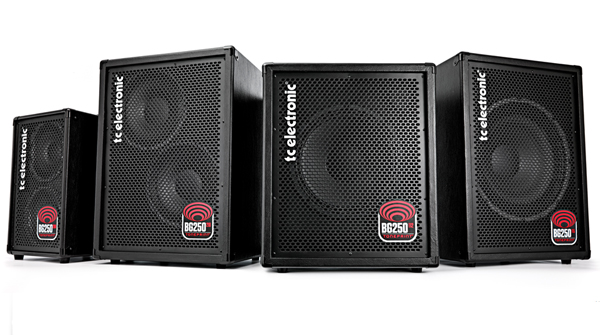 Following the success of last year's BG250 bass combo, TC Electronic has announced a completely new line of combos that focus on portability, playability and tone! The all-new BG250 combo line-up consists of four different combos, which only differ in their speaker configurations. All sport 250 watts of power, TonePrint functionality, built-in tuner and intelligent EQ whilst retaining the ultra-light, super-portable and ultra-powerful formula that made the original BG250 such a hit.

The combos in this series consist of a version with a 1x12" speaker, a 1x15" speaker and a 2x10" speaker configuration all with a custom 1" piezo tweeter. Rounding out the series is a 2x8" that is simply love at first tune-up. The 1x12" gives you the best of both worlds: tight and powerful sound with a strong presence in the mids. This gives a bassy and old school sound, or a modern and crisp vibe.  The 1x15" focuses a bit more on the low-end oomph and raw power. The 2x10" version has a scooped sound, with a fast response. This results in a tone that is focused, without ever losing the low end. The sound of the  2x8" is best characterized as fresh, inspiring and with nice clarity and attitude, without ever losing the rumble.

All combos in the BG series feature intelligent EQ, which means that no matter how you cut or boost frequencies, things always sound great and are tailormade for bass. Other features for these combos are a Built-in 6 String Tuner, Rehearsal Input - Playback through Speaker or Headphones, Balanced DI Out for seamless recording or PA output , a headphone output and an optional footswitch.

The BG250 combos sport dual Bass TonePrint, a unique feature that lets you load signature effects into a TonePrint slot.  So load any of the Bass TonePrints and off you go! Switch between them with the optional Switch-3 footswitch; change them on the fly or mute - whatever you need to create your tone. The 2x8" combo allows you to use the footswitch to switch Toneprints, while the others in the series also allow switching of sounds from the amp.

Besides the ever expanding roster of TonePrint artists including Nathan East, Mark King, Duff McKagan and Richard Bona, there's also many effects available to try for free, including Chorus, Flanger, Vibrato, Octaver, SpectraComp and Bass Drive!

"The success of the original BG250 combo basically set the course for us, we needed to now do these with different speaker configurations. So we worked pretty hard on incorporating all the features our bass amps are known for: tone, feature set and power with different speaker sizes to get any and all bassists the perfect combo amp for practice, studio and stage - and I think we rocked it!"