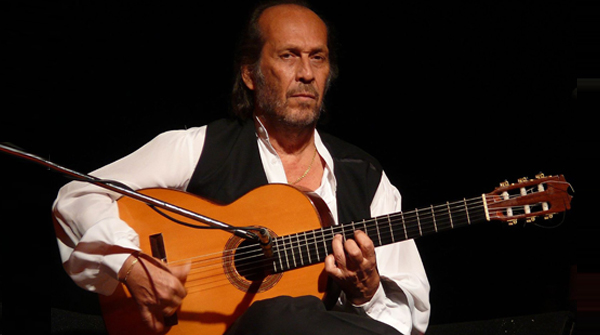 Known for his 'aggressive technique' Paco was also famed for his unconventional and innovative style of flamenco guitar laden with jazz influences.

Arguably the most celebrated flamenco guitarist of a generation, his death was announced by the mayor's office in Algeciras, southern Spain, where he was born.

He is said to have died in the Mexican resort of Cancun following a heart attack.

Asides from performing Paco also worked on many films most notably with Spanish director Carlos Saura appearing in his 1983 version of Carmen, which won a UK Bafta award for Best Foreign Language Film in 1985.

Algeciras is to hold two days of official mourning. Its mayor, Jose Ignacio Landaluce, called the musician's death an "irreparable loss for the world of culture and for Andalusia".

"Once in a while someone comes along in a musical discipline who changes everything, who sees things that others have not seen up to that point, and Paco de Lucia was one of these people.

"After him, flamenco radically changed and the proof is that so many young people have taken his lead and now flamenco is full of that virtuosity."

"I knew every rhythm".

"Paco de Lucia was  viewed in my mind and the world of flamenco as the most important of the newer generations of guitarists embodying the most advanced flamenco approach the world had ever known.

"His influence was major and the legions of followers in that world are for sure quite many, however it was the courage of Paco to break the mould and venture into a more unconventional (for flamenco players) harmonically challenging highly inter playable duet role. He was ready for a challenge that was deemed risky in those days where most all other flamenco guitarists would never have the guts to go."

Born Francisco Sanchez Gomez on 21 December 1947, his father Antonio Sanchez was also a flamenco guitarist of Gypsy origin. Paco took his stage name in honour of his mother, Lucia Gomes.

Algeciras is to hold two days of official mourning. Its mayor, Jose Ignacio Landaluce, called the musician's death an "irreparable loss for the world of culture and for Andalusia".