Slayer to Use Hanneman's Final Work on Next Album 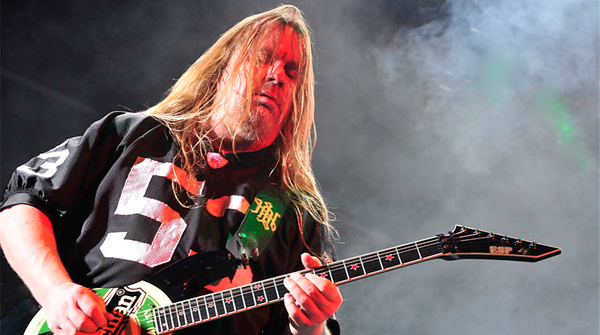 Slayer to Use Hanneman's Final Work on Next Album -

Jeff Hanneman's final guitar work is set to feature posthumously on the next Slayer album.

The late thrash legend died in May, aged 49, after suffering live failure. Exodus guitarist Gary Holt had stood in for him at live shows for the last two years after he was sidelined following a case of necrotizing fasciitis he contracted from a spider bite.

Leading up to his untimely Hanneman had been working on new material, and Slayer plan to include some of it on what will be their eleventh studio album.

'I haven't had the privilege of going through his audio files at the moment, but that's something I plan to do.

'He had several ideas together that he'd presented to us in the course of the past year. There was one complete song that he'd managed to send to everybody, that I thought was really, really good and communicated that to him.

'There's stuff that would be great to listen to, just to see what's there and how we can possibly use what he had done.'