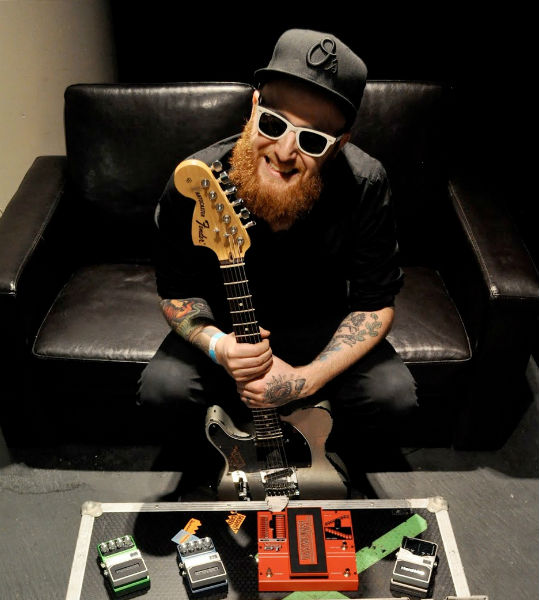 A hardcore Whammy user, Mikey has been using the original DigiTech Whammy since their debut album 'Babylon' (for evidence look no further than Skindred mega-tunes 'Pressure' and 'Nobody'!). In preparation for the band's upcoming UK Jagermeister tour (Black Spiders & Therapy support), Mikey had been getting to grips with the latest and greatest incarnation of the Whammy, the true-bypass DigiTech Whammy DT.

"The extra momentary and drop tune features are a hell of a lot of fun, and the new footswitch input allows you to be able to use more than one setting in a song without bending down to your pedalboard and forgetting to play the next riff in time." says Mikey. "Thankfully DigiTech haven't done away with the industry standard I-can't-do-without features, mainly being bomb-proof and MIDI controllable, a big big plus for the touring professionals out there. All that and it's now polyphonic. At last you can play chordy riffs that don't sound garbled or glitchy, as well as speedy runs of notes without losing any definition."

Mikey is also using the latest HardWire compact pedals. The HT-6 Polyphonic Tuner, SP-7 Stereo Phaser and TR-7 Tremolo/Rotary pedals are all being road tested ahead of the sold out UK tour.

"The Polyphonic Tuner is pretty much what most guitarists have been waiting for - I know there are others on the market but this one is built tougher, has a far more detailed display and can handle drop tunings better (a must for metal players). The bypassed sound is totally transparent too which is great." he says.

"The Stereo Phaser and Tremolo/Rotary pedals are heaps of sexy analogue sounding modulation, both feature tons of lush scrolling vibe as well as a mass of different modes. I think the Rotary is my favourite out of the two - it's wicked".

Skindred's UK tour begins on the 10th April at the O2 Academy, Leeds. The new album 'Union Black' is out now.